There are other worlds than these. Stephen King's The Dark Tower, the ambitious and expansive story from one of the world's most celebrated authors, makes its launch to the big screen. The last Gunslinger, Roland Deschain (Idris Elba), has been locked in an eternal battle with Walter O'Dim, also known as the Man in Black (Matthew McConaughey), determined to prevent him from toppling the Dark Tower, which holds the universe together. With the fate of the worlds at stake, good and evil will collide in the ultimate battle as only Roland can defend the Tower from the Man in Black.

Rating: PG-13 (for thematic material including sequences of gun violence and action) 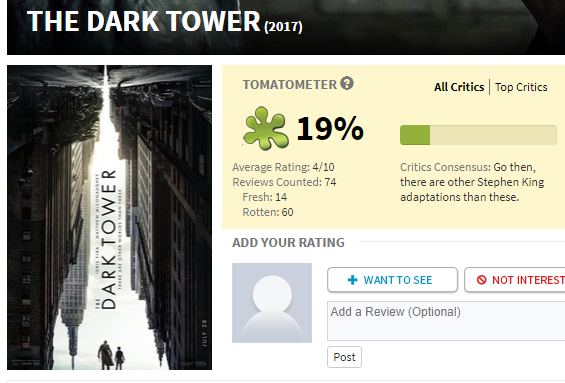 33 Metacritic with 33 Reviews and 19% Rotten Tomatoes with 74 Reviews.

Yup, I knew they were sitting on that review embargo to the last minute for a reason. That's too bad, but, not surprising as it's unrecognizable to the source material.

Well, duh. How would you pin a book to a movie screen and have everyone be able to read it?

He means their not faithfull to the storytelling and characters.

Not sure why so many hollywood guys, think they can tell a better story than the authors, and instead of sticking to story, go off doing their own thing.

Rarely is it better than what the author wrote.

Yeah, that's not the best. Was hoping for good things.

Not surprised. I've only read books 1-4, but at no point did I ever think to myself oh this would make for a great action movie. Seeing the trailers was just like.....uhm.....ok

So reviewers are saying it is as bad as Valerian almost. I do not know what to believe.