Police have confirmed a "number of fatalities" following reports of an explosion at Manchester Arena.

Network Rail said train lines out of Manchester Victoria station, which is close to the concert venue, were blocked.

Greater Manchester Police tweeted to urge people to stay away from the area.

A number of eyewitnesses have described the confusion in the aftermath.

Robert Tempkin, 22, from Middlesbrough, said: "Everyone was screaming and running, there were coats and people's phones on the floor. People just dropped everything.

"Some people were screaming they'd seen blood but other people were saying it was balloons busting or a speaker had been popped.

"There were lots of ambulances. I saw somebody being treated. I couldn't tell what had happened to him." 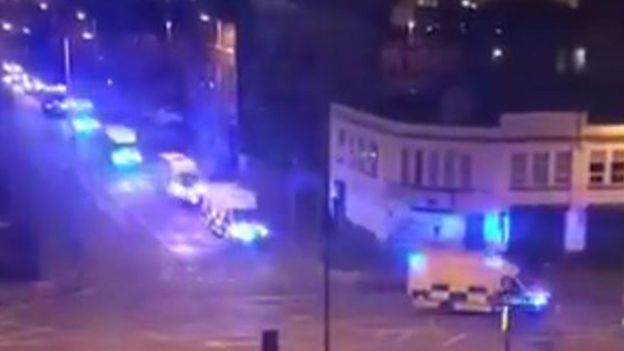 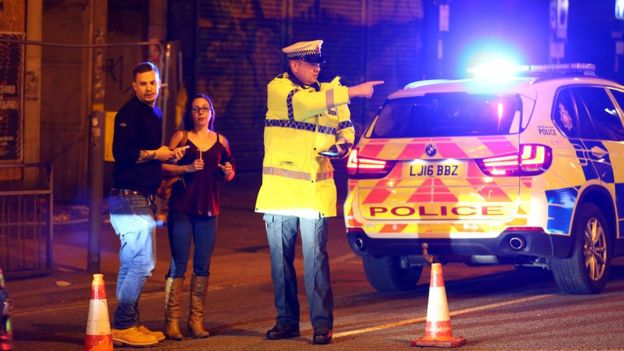 Josh Elliott, speaking to BBC Radio 5 Live, said he was shocked by news of the fatalities.

"A bang went off and everyone stopped and screamed... we basically hit the deck," he said

"It was bedlam… it was horrific.

"We got up when we thought it was safe and got out as quickly as possible.

"People were just crying and in tears... police cars were everywhere.

"We just wanted to get out as quickly as possible because we didn't know what was going on."

Shit, hope it is not a, you know what.

Explosion seems to come from the foyer.

Just quoting bbc at this point:

Jade Baynes, who is from Hull, said she was told to run by armed police after leaving the arena.

The 18-year-old said she heard loud bangs and what sounded like gunshots just after the concert had finished.

She added: "There were just a loud bang and a flash and everyone tried to scramble out.

"An alarm came on telling everyone to stay calm but leave as quickly as possible."

From what I've read it happened during her last song.

Also read that it might've been caused by an exploding gas-filled balloon used during the concert. That sounds a bit too stupid though.

Bomb disposal team is on the way; seems less like an accident. Especially how the concil's spokes man uses terms as 'easy target'.

Pat Carney, the council's spokesman for the city centre, said everyone's thoughts were with the families of those killed and injured.

"It's a very easy target - a concert hall where young people are enjoying music," he said.

Yeah, it seems too big to be just an accident.

Oh boy, what can it POSSIBLY be? It's probably the Buddhists again... /s