A lorry has struck a crowd during Bastille Day celebrations in the southern French city of Nice, media reports and witnesses say.

The incident took place on the Promenade des Anglais during a firework display, the reports said.

One image on Twitter showed about a dozen people lying on the street, some being tended to.

The local prefecture has urged people in the area to remain indoors, calling the incident "an attack".

Some reports spoke of shots being fired but these have not been confirmed.

A journalist with the Nice Matin newspaper reported from the scene that there was "a lot of blood and without doubt many injured".

Another image on Twitter showed a white lorry stopped in the middle of the promenade with damage to its front, and four police officers observing it while taking cover behind a palm tree.

Nice Mayor Christian Estrosi said that "a lorry driver appears to have killed dozens of people".

Looks to be a terrorist attack with plenty of deads :s.

What is a lorry? And Bastille day?

My thoughts and prayers go out to these people!

I think lorry is british for a truck? A man from London that visits my shop always use the word lorry and learned the word from him.

Oh, wow, so a truck drove into the crowd? How horrible!

Yup, hundreds of people gathered to watch the fireworks and a truck drove straight into the crown, and he kept going for hundreds of meters before the Police shot the driver down. 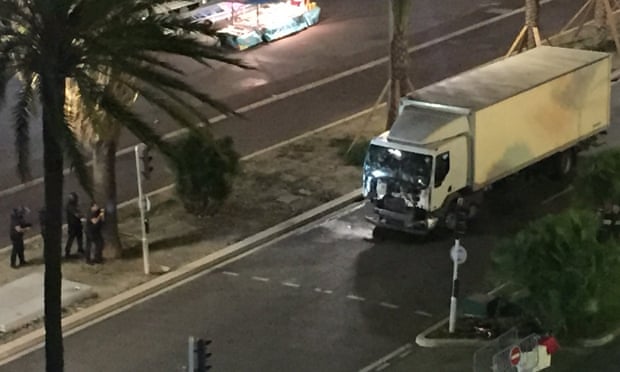 This is all just out of control. I hope it does not turn out to be a terrorist group again.

That's really scary and a very different type of terrorist attack if it is indeed one.