A Briton who tried to grab a police officer's gun at a Donald Trump rally in Las Vegas said he wanted to shoot the US candidate, court papers say.

Michael Steven Sandford, 20, did not enter a plea when he appeared before a judge in Nevada and was remanded in custody until a hearing on 5 July.

He is charged with an act of violence in a restricted area.

He had reportedly tried to seize the gun after saying he wanted Mr Trump's autograph at Saturday's rally.

He said he had been planning to try to shoot Mr Trump for about a year but had decided to act now because he finally felt confident enough to do so, court papers say.

A federal judge found Mr Sandford, who reportedly appeared in court in shackles, to be a danger and risk of non-appearance, and he was ordered detained pending his preliminary hearing.

When asked about the arrest of Michael Sandford, a Foreign Office spokesman said: "We are providing assistance following an arrest of a British national in Las Vegas."

The charge relates specifically to breaches of an area where someone protected by the Secret Service is visiting,

Earlier on Monday, Mr Trump fired his campaign manager, Corey Lewandowski, who oversaw his triumph in the primary contests.

The US presidential election campaign of 2016 has been fringed with violence. Almost everywhere Donald Trump goes he attracts protests.

The tycoon often mocks the demonstrators and there have been clashes with his supporters, both inside and outside of his packed, emotionally charged rallies. For some, the violence has stirred dark memories of 1968 when Democratic presidential contender Robert Kennedy was assassinated and riots broke out at the party's convention in Chicago.

This year events have not descended to those awful depths but still, the country feels edgy and the Secret Service, which guards candidates as well as presidents, has been on high alert.

In March in Ohio agents swarmed around Mr Trump after a man apparently attempted to climb on to the stage where he was speaking. Other events have been cancelled because of security concerns. With five months to go, many Americans are worried about where this election is heading.

'Expected to be killed'

According to the court papers, Mr Sandford said he had never fired a gun before but went to a range in Las Vegas on 17 June to learn how to shoot.

At Saturday's rally at the Treasure Island Casino, he allegedly tried to grab the officer's weapon because it was in an unlocked position and therefore, he said, the easiest way to get a gun to shoot Mr Trump.

Court documents say Mr Sandford acknowledged he knew he would only be able to fire one or two rounds, and expected to be killed during an attempt on Mr Trump's life. 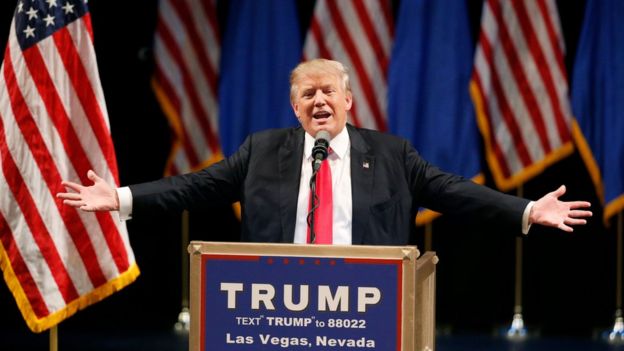 He told police if he had not tried to kill Mr Trump at this rally he would have tried again at a rally in Phoenix, for which he had already booked tickets, the papers say.

He told investigators he had been in the US for one and a half years and drove to Las Vegas from California specifically to kill Mr Trump, the court papers say.

Court research showed he was unemployed, living out of his car and in the US illegally, the Associated Press news agency reports.

A federal public defender said he had autism and had attempted suicide, the agency adds.

US media focused on the Republican candidate's fundraising woes over the weekend. The Trump campaign had just $1.3m in cash at the start of June, compared with Mrs Clinton's $42 million.

This is what you get when you insight violence and use rhetoric like he uses.

Could this deemed an act of terrorism?

Now that isn't very British of him, tut tut.

Terrorism is the act of causing/using violence for political gain. While you could argue this is the case, this was surely just a messed up person acting on hate to try and kill someone, so murder (or attempted). The recent murder of the MP in the UK is just that, murder, even if it was politically motivated.

I don't think it is hate, he really believed the world would be a better place without trump and I believe he is not alone.

if he was shot and wasn't killed he would have won the election.. please don't shoot Trump

Well if this was a Muslim, we'd all be told now how the person wasn't really a Muslim, etc... So I'll jump on the retarded logic bandwagon, and say he wasn't really British... Phew, free of any guilt, we Brits are the nation of peace...

I bet they're looking up his DNA to find any traces of middle eastern in him. /s