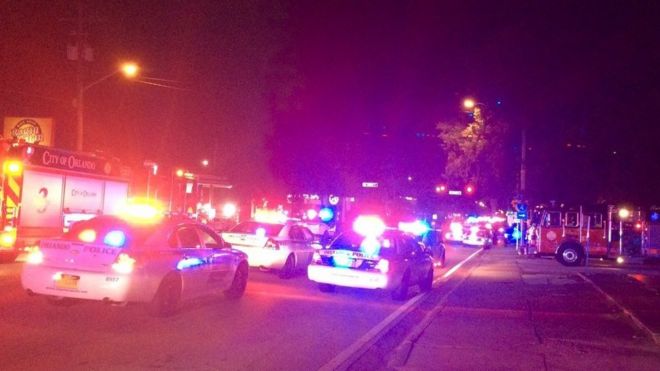 
There are multiple injuries after an attacker opened fire inside a gay nightclub in the Florida city of Orlando, police say.

There are unconfirmed reports that the attacker is still inside the Pulse Club and has taken hostages.

Orlando Police have urged people to stay away from the area.

Video footage being shared on social media showed dozens of emergency vehicles at the scene and people being treated on the pavements.

"People on the dance floor and bar got down on the floor and some of us who were near the bar and back exit managed to go out through the outdoor area and just ran," Ricardo Almodovar wrote on Pulse's Facebook page.

Another man, Anthony Torres, said he heard people screaming that others in the nightclub were dead.

Local TV reporter Stewart Moore tweeted that he had been told by a source that more than 20 people had been shot.

He said the attacker was still inside the nightclub with hostages, and was feared to be wearing a bomb.


Edit: So it was an born USA citizen with Afghan roots (suspect). Called Omar Mateen. 50 people did not make it :(.

f you're in Orlando, OneBlood is in need of donations to help victims. Here's a list of donation centers.

It's too early to make any real comments on this. But I get the impression the US has a big problem concerning levels of violence.

I'm so glad I don't live in the US.
The level of violence over there is truly frightening.

How do you get into a club with a gun and a bomb when security searches are pretty much mandatory?

Yeah their is not much information, or not much confirmed information atleast. Is the bomb real? How many got caught in the wildfire etc. Did he/she attack it because it is a gay bar?

Sad news and so close after what happen in Orlando..

Orlando again, what the hell is going on

If security searches in the US are anything like those in Europe, all you have to do is open your bag and after a quick glance you can get in.

You are not allowed with guns in clubs? i am always used to the view of people walking with guns in their bar but yeah that was Texas.

And Donald Trump wants to stop Muslims coming into the country, I think america has much more problems with security then that. Jesus.

20 people shot, and people are against gun control.

Twisted people will always find a way, horrible for the people that died and their families/loved ones.