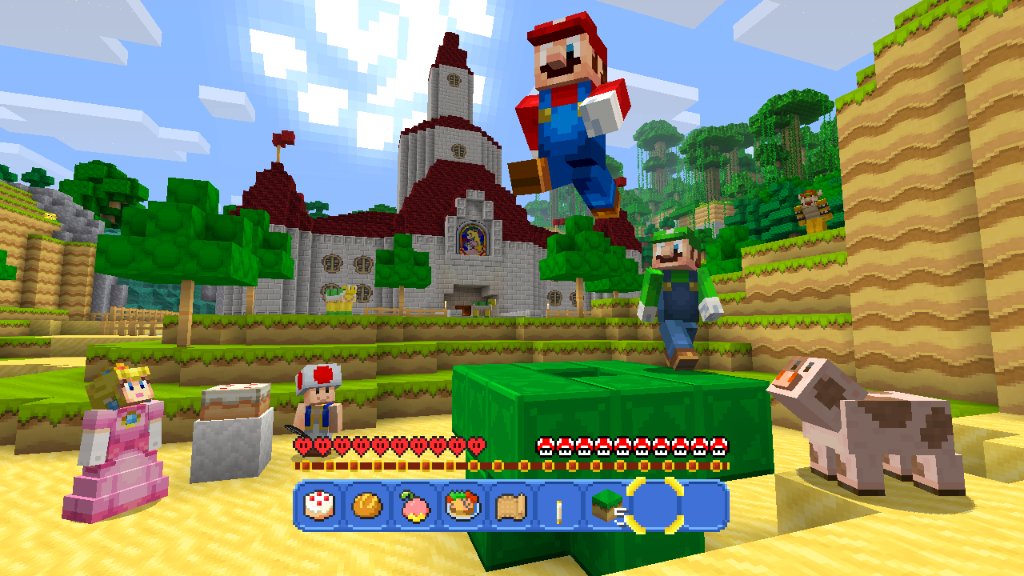 Minecraft: Wii U Edition has been available for some time and, though it’s a remarkably good video game, it’s not felt especially Nintendo-ey. That’s about to change!

As you can see from the spiffy trailer up there, a free Mario Mash Up pack is on its way to Minecraft: Wii U Edition. It features a Mario-themed world, 16 original super-tunes from Mario 64, a specific Mario-themed texture pack, and a heap of skins featuring your favourite Mario-buddies. In fact, there are over 40 characters to play as. Of course, the two plumber guys and the princesses are included but we’ve even packed in some of the cheekier folk like Kamek, one of the Hammer Bros and that pernicious plant, Petey Pirahna. It’s a delightful mix, all in all.

Did I mention that the Mario Mash Up pack is completely FREE? Yes, I did. Sorry.

Both the digital and the retail version of Minecraft: Wii U Edition costs $29.99, 30 golden coins, or the equivalent in your region.

sounds good to me :)

I made better Peach's castle! Pfft!

That'll help justify the fact that it's $10 more than any other version, at least.

Sure, but what is appealing are the sound effects/Music in those mash packs.

Well, there's another thing that SuperMetaldave64 got right.

Glad Zelda got pushed back to finish this in time.

Glad its free. Also cool to have the retail version for those who want that.

Definitely didn't see this coming, glad that Nintendo is putting an effort to help promote the Wii U version of Minecraft tho.

What if it was MS's idea?