That should ensure that people who buy it also have the proper PC hardware.

You can tell me what you want, even that you live on the moon ^^'

One figure we can be fairly certain of is the Oculus Rift’s resolution – the consumer model is set to run at 2160 x 1200. That’s one display, split across both eyes, and equates to a per-eye resolution of 1080 x 1200.

This was revealed in a blog post by Oculus’s chief architect, Atman Binstock, and can be assumed to be fairly accurate. It is, however, subject to change, and could be scaled up closer to the Rift’s launch.

While there are currently no available specs for the HTC Vive’s finished model, the developer edition is also listed with a resolution of 1080 x 1200 pixels per eye. As this is only a preliminary dev kit, this could conceivably receive an upgrade for the consumer version, but it’s equally possible that this will be the device’s final display.

PlayStation VR is currently trailing a little behind the pack on display, with a resolution of 1920 x 1080, also divided between both eyes. In practise, this gives it a resolution of 960 x 1080 for each eye, which is less than both of its main competitors. This is something that we expect will improve substantially prior to the device’s market debut.

- Second part was about DK1/DK2 not cheap aswell but price quality was great :).

edit: Also the quality is just more than display/resolution but the support of it.  In no time people will have the ability to play hundreds maybe thousands of experiences with the CV1.  I love the idea that the same will happen with Playstation VR but I find it hard to believe, even when I pre ordered ps vr and hope it will be great I am still skeptical (and also don't like the idea that I need a camera for it).

Anyone wanna guess how much "Oculus Touch" is going to be?

It's expensive but it still sounds like they are selling it at a loss.

For a peripheral, lol. Can you hear the splashing of all the devs jumping ship? 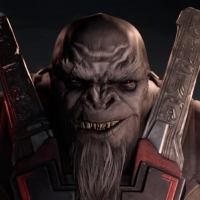 Also where are the games for it?

I doubt that. They are a bussiness, they arnt doing this outta the goodness of their hearts.

Sony can sell theirs at a loss, becuase the software cuts they get from selling games, will offset things abit.

This sounds like Oculus decided to not price their VR with tiny margins.

They probably arnt counting on selling that many of them, and want decent profits from the start.

There is a history of seling expensive accesories on consoles, they just you know have to actually be good.