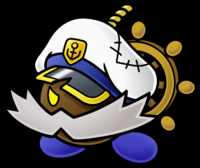 I agree with you. 'Nuff said.

The Gamecube received better 3rd party support than the WiiU, but I certainly wouldn't call it good.

That is very interesting to say the least. Only thing is they completely failed by making the disk limited in space compared to the competition.

They needed and still need to be careful with that sort of thing, but it's nice to see that Nintendo at one point admitted that price and console capabilities were important factors in design.

and seems that dint work.
why would work now?

Well it's pretty obvious why they took that approach. PlayStation had just come into the market and shattered its competition, so that's why Nintendo tried to answer like this. Because of it's failure, they changed completely afterwards.

The GameCube had decent third-party support, but it fell way short of the PS2 in that regard, and even the Xbox had better third-party suport than the GC. The likely culprit? The little guy on the left here: With less than one-third the capacity of even a single-sided single-layer DVD (1.5GB vs. 4.7GB), the GC's proprietary miniDVD format didn't do the system any favors. Now, I know there's all the "Well, they could have just split the game across multiple discs" talk, and sure, there's been plenty of multi-disc games before and after, but A) they weren't exactly common, B) some games probably couldn't get split across multiple discs as they take place in a single contiguous environment (think GTA), and C) I honestly doubt that anybody really wanted to split their games across multiple discs and usually only did so when it was necessary (even CD's 700MB capacity was not enough for many PS1 games; it was just a hell of sight better than the 64MB that the biggest N64 carts could hold, plus CDs cost a lot less to make). Not only is it extra work to split just one port up into multiple discs, but it also incurs greater expense (you're talking about an extra dollar or two per copy in manufacturing costs, which does add up). While a handful of publishers felt it was worth it for at least some titles, many major third-party games that came to PS2 and Xbox were no-shows on the GameCube, and the non-standard format is the only plausible explanation why.

Oh honey... 3rd parties don't give a damn about ease of development. They don't even care about power.

Even more third party developers jumped in at the launch of the wii u compared to gc. But every single of them bombed hard. So that's a non-factor really.