Mafia Round 58: Avatar The Last Airbender

took the words right out of my mouth

Just as the day had begun it was over, just like that. While everyone was still arguing over what to do Tai Lee took things upon herself. Yes, this was the first time someone wanted to lynch themselves. Everyone looked around at each other slowly wondering if this was really happening, and it really was. Using her nimble moves Tai Lee climbed up to the highest tree she could see and then plunged to her death. The splat was very loud, as you might imagine. On her way down some said they heard her saying, "Avenge me, my princess!" Who knows what that could mean. 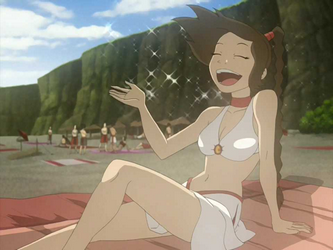 She will be missed!

Night Five Start. Send in your night actions to me.

Things are moving much quicker now. It is only a matter of time before things come to an end. What will the outcome be? Maybe we can ask Aang to enter the spirit world and help us out, one person suggested. While there he could learn many things about past, present, and future events. He might be able to see the killers true identity! Everyone thought this was a good plan, but there was only one problem; Aang cannot defend himself in this state. He is completely at the mercy of his surroundings! This proved to be Aang's ultimate downfall. While in his "avatar state" he was struck down by an enormous fire blast. Even Charizard would be jealous of such an amazing attack. It was something that not even the avatar could survive, especially without Katara by his side. There was no one to heal him and nothing else anyone could do. Aang, who had the hope of the whole world on his shoulders, was no more. Things are looking extremely bleak for our small group. What now?

Astro (Aang) was killed. He was Town Jack of All Trades.

...and so the avtar cycle repeats once again. R.I.P. Aang

Hmm no ones want to talk.

VGChartz was down for me earlier so I couldn't post until now- there is nobody alive who can confirm my alignment right now, so I'm going to wait on any more potential information (although I doubt we have any serious power roles left)

What are you talking about. We already mass claim.

Are you what exactly?

This sucks, both of the players remaining I thought were possible Mafia.

Im leaning towards Noctis, because of the whole deal with him trying to claim Linkz was town.

But radish also hesitated to vote Linkz yesterday as well, but Noctis was no where to found for that day, but it did only last 12 hours or so