Forums - Nintendo Discussion - Would you be just as big a Nintendo fan if they went "software" only? 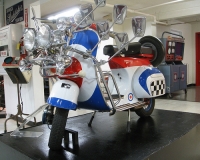 I would buy their games but wouldn't be a fan of the company. For me personally Nintendo console quality has been the best never had to replace any of my Nintendo consoles unlike going through 2 psxs 3 ps2s and 2 Xbox 360s


"Life moves pretty fast. You don't stop and look around once in a while, you could miss it." Ferris Bueller

Honestly I would rather Nintendo went Software only. Kinda blows having to buy machines I don't particularly care for just for a few select titles compared to my other consoles.

nop, they create the most reliable piece of hardware every generation... I would not want to live with console makers that ignore bc, get red rings, overhead...

I agree, I'd like them to go software only. Then I wouldn't have to buy their weaker consoles to get their games.

I make videos that are sometimes funny I think?

Plus, I can't see Nintendo retaining their identity if they stopped making handheld consoles. I can't picture Pokemon on a Playstation or Smartphone.

However I'd still be a fan, and I don't think games like Mario Kart or Smash Bros. will go down in quality. Zelda and Metroid, maybe, but not the heavy sellers.

I like that Nintendo hardware is so different from the competition these days, it makes things more interesting. If the Wii had just been a Nintendo-branded 360 I don't think I would have enjoyed the 7th gen nearly as much. Hopefully the same is true of the Wii U.

The original Pokemon was designed for the Gameboy, the chain is called "Pocket Monsters" in Japan, and yea. A lot of the better Nintendo franchises are designed specifically for the hardware. I don't think Nintendo would make games like that on a Sony or Microsoft platform.

I would be a bigger fan of every company, and video games in general if they ALL went to a unified platform.

as long as their games remain of the same high (or lately 'high-ish') standard I wouldn't care what machine they made games for. I only buy nintendo consoles to play their damned 1st party games (lately it feels like its out of habit more than love) and always have to buy a sony console to play everything else anyway, so at least I wouldn't need multiple consoles anymore. And I don't agree with this :'Oh Nintendo make the consoles and develop technology to suit the type of games they wanna make' argument. I think they could adapt and innovate no matter what and there's no reason they couldn't develop new controllers etc for other peoples consoles if they really wanted to. Im sure sony or ms (or anyone else that may release a console in the future) would do whatever nintendo asked just to have their games on their machines.
I would like to see what games nintendo might produce if they were totally free from having to worry about making stuff they think will move hardware.

It'd be interesting to see. If it did occur I wonder if they'd exclusively work with a single console/company or just release their stuff for every console (I think they'd go with just one company personally)

Anyway, to address the topic, in theory if nintendo released high quality games for other consoles I wouldn't have any problem with it at all and would still remain the fan I am today, if not more so!