Another sequel where the original doesn't make the list but the sequel is ridiculously high up! Mass Effect 1 was good, but was plagued with poor shooting mechanics, a clunky RPG interface and some rather horrible bugs. ME2 fixed all that and then refined the experience to become more of a shooter/RPG hybrid than an RPG with tacked on shooter controls. Guess what? It worked brilliantly.

Rather than focus on weapon customisation and RPG-levelling, the RPG focus was shifted more towards character development and story-telling that helped to bring the player into the Mass Effect universe. The shooting elements were also changed so reloading and ammo conservation now became important. Gone were the numerous bugs that plagued the original. All these when combined together produced one of the best RPG/shooter hybrids on the market. 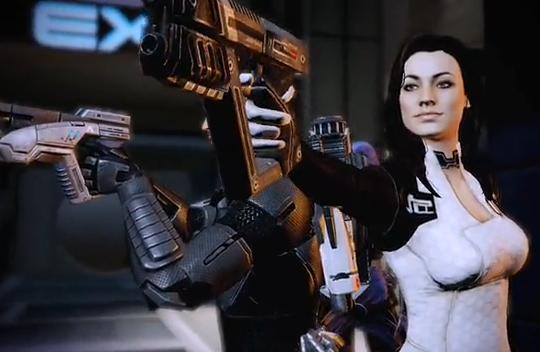 The characters were some of the most intriguing seen in a video game. Mordin was brilliant and hilarious, Thane was deep and philosophical and Miranda loyal and ideological (it also helped that Yvonne Strahovski from Chuck was in the game

). However, summing up these characters in a couple of words doesn't really do them justice. The vast majority of missions were based on the characters as you built your team and new layers were added as you did each mission. Discovering motivations and each characters personal story, as well as managing interactions between crew members were all part of what makes this game so amazing. The main story itself was actually relatively simplistic, but the smaller character stories were what made the game.

Add into the mix that all the decisions you made in ME1 are carried over to ME2 and you get a truly great RPG experience.

The elder scrolls games have always offered immense freedom and player choice, and Oblivion was no different. However, they also had their share of problems and the storytelling aspects weren't always as strong as perhaps they should have been. Oblivion's storytelling improved greatly upon those found in Morrowind but also added elements to make the game more immersive. Voice acting helped to bring you into the world, especially in the main quest with Patrick Stewart and Sean Bean voicing two of the main characters. No longer did you attack something without hitting it; gone was the background die roll. Attacks were now based upon your own skill rather than purely based on stats. Mini-games meant a mixture of skill as well as statistics contributed to aspects like lockpicking. And the guild quest-lines each had their own fully developed storylines that felt as if they belonged in their own seperate game.

The content of Elder scrolls games is always massive and Oblivion didn't dissappoint, but it also avoided much of the problems of generic tasks that open world games typically have. It incorporated some brilliant quests with ingenius and genuinely interesting tasks. One such example is the dark brotherhood quest which tasks you to kill five people in a locked mansion without the others knowing. Each one becomes more paranoid and scared and each has their own biases as you kill each character. The fighters guild quest which tasks you go undercover to find out the secret behind the rival guild. Or the main-line quest where you witness the destruction of Kvatch and has you entering your first Oblivion gate. The storylines (Main and guilds) were all engaging and interesting and even the one-off questlines added to the sense that this was a vibarnt and living world.

However, for me, the quality described above is only half the story. The expansions, DLC, mods and the ingenuity of the modding community are what really boost this game up to third place. Officially, the Shivering Isles added a more vibrant and bizzare world more in line with Morrowind than traditional fantasy whilst the Kinghts of the Nine DLC added an opposite questline to the Dark Brotherhood. Unofficially the OOO mod, Kumiko manor, the Achaeology guild and saddle-bags (among many others) all added great content to an already brilliant game.

After Persona 5 and Mass Effect 3 are released those two series most likely will hold 60 percent of my top 10.

Oblivion was great and some parts were better then Skyrim. The cities were better fleshed out and felt more unique. Dark brotherhood and thieves guild quest line were far superior and some of the side quests were better too. For example the one where you go inside the painting was excellent.
I didn't like most of the main quest though, I ended up skipping through all the oblivion gate worlds with /noclip /god mode. Luckily all the other quest lines more then made up for it.

Skyrim was my first Elder Scrolls game, and I also felt that the main campaign is pretty lackluster. It's extremely straightforward, with little surprises (really only Paarthurnax comes to mind) or noteworthy events compared to even the sidequests in the game.

I've heard that the different guild quests are shorter compared to Oblivion... is that true?

I'm not sure I entirely agree with the cities comment. I felt the cities in Oblivion were all fairly unique but in Skyrim I really felt that they tried to make them all different in architecture and in economic success. Not all cities were easily defendable and Solitude and Markarth for were just stunning to behold.

Completely agree with the Thieves guild and Dark Brotherhood quests being some of the best. And the painting one was a classic; very unique and highly entertaining. I didn't mind the main quest too much but the Oblivion gates did become a bit of a chore. Glad they have dragons in Skyrim instead!

I think they are probably a bit shorter. I just generally felt that each guild had less missions before you reached the top. The Mages Guild seemed especially short and ended rather abruptly. The thieves guild takes a while in Skyrim but that's because you need to do lots of the minor missions before you can be guild leader. The actual questline is relatively short.

Having said that, they did also have the StormCloak vs Imperials questline which Oblivion didn't have and I do seem to get more minor/random quests due to the new quest system they have in place.

I really wish I could play this. It's often cited as a classic yet I only knew one person who owned the game and it's pretty difficult to get hands on it now.

Yeah it's a shame the mage guild quest line was so short, that one was the most interesting of the lot. The Stormcloak vs Imperials was the most disappointing one, capture the fort missions were very poorly executed. The daedric armor ones were great in Skyrim, although there were a couple boring ones too. Skyrim has more minor quests and random quests, but they're all rather straightforward fetch or kill quests.

Marketh and Solitude were my favorites as well, beautiful cities. However they still felt very small. There was no main city like the imperial city in Oblivion. (loved the arena challenges) Skyrim has more towns, but the 5 structure strong holds were very repetitive with the same houses and exact same inn everywhere. (There's twice as many guards walking around then there are people living in each village)

The dungeons have been vastly improved in Skyrim, Bthardzam was my favorite. It's a shame Blackreach wasn't utilized for more quests instead of going into the caves all the time. I would expect that the Winterhold college would be very interested in that place.

Dang, to be honest the dungeons started to blend together in Skyrim. Nord dungeons and Dwarven dungeons. Either a single area or a three tier area. Not much

But yes, Blackreach was very pretty (just learned that you can blast the ball to summon the dragon). Although Falmers were a piece of cake thanks to the fact that my sneak was out the wazoo.