Forums - Nintendo Discussion - What can Nintendo do at E3 to save the Wii?

too many software droughts, too much competition.

I think the price cut will help sales and theres always a chance of them revealing a new phenonenon but I think those chances are slim. There is definately no way xenoblade or last story will have any effect on hardware sales whatsoever. The wii will stay in free fall and software will continue to decline. I see maybe about a years worth of software left for the system. Nintendo needs to get cafe out with a strong first party launch line up as soon as possible.

make games for the system, there is nothing more to do 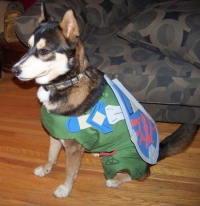 Pretty much, but 'save' in this context means surpassing, or at least meeting, Nintendo's projections and to get the Wii back in the number one space, and this strategy could do it.

With all the doom threads, it's easy to get confused.

As a side note, it's interesting to see the poll results. So much pessimism towards Nintendo...

I don't know if it's just me, but the vid isn't working. All that happens when you roll over it is a Wii logo appears in the top-right of the screen. Am I missing something? :/

@conegamer  do you blame people?? not much has been going on in the Wii front, with 3DS just releasing and a new system about a year away most people are expecting to not see too much from Wii.

Not really, but there's still over a year left in the console (think about all the DS games we had; Pokemon, DQ, Professor Layton, Okamiden to name a few), plenty of games which can come over to be localised, a Zelda, Pikmin and DQ game in the pipeline and a price cut for the console. It's sold nearly 90,000,000 units and is shifting MASSIVE amounts of SW, as previously discussed. Nintendo won't ignore that and stop supporting it now.

^^^ yeah but DS has actually have had good support its ENTIRE lifetime.  They need that 3rd party support, Ninty has DS 3DS & Cafe to support, 3rd parties sure as hell are not going to support it now. A pricecut aint going to do much, not when the other 2 can do the same. Pikmin is not a console mover not even close. There are bigger 3rd party games from the HDs coming out around the same time. DQ is gooing to be a while. Zelda will do good. IMHO they need games and as of now there not really getting any

If you know a Pikmin 3 release date, don't hold back on us!

The Wii has been well-supported by Nintendo, far more than the DS, or N64, or GC, and is the same for 3rd party devs (bar N64)

It's not been great, but Nintendo isn't famous for its 3rd party games. It's famous for its 1st party games, and there's been plenty of them this gen, and no doubt plenty more to come. By the end of this year, I reckon we'll know all bar one or two major titles yet to come out on Wii, as it may turn into a PS2 and have a long stream of support for fledgling developers, producing the odd gem. But it's too early to call just yet.

^^^ im sorry but you wish it was PS2, Wii is not going to be PS2 and was never even close to PS2, PS2 actually had "good" 3rd party support its entire lifetime, the industry doesnt want another PS2. But hell maybe it will get support like PS2, i doubt it. Aint PIkmin 3 supposed to come out this fall/winter? cause im sure Batman, Elder Scrolls COD will hand it its ass in terms of sales. For your sake and mine, because i dont fell like buying another console any time soon, i hope your right i really do