Forums - General Discussion - The 'Get it off your chest' thread 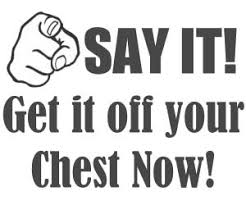 This is the 'Get it off your chest' thread. Say something you haven't told anyone before and you just want to let it out!!! Maybe you hate somebody or thing, or love..etc. Well you get the deal, you know what to do.

This last weekend I was in Kmart and someguy in street clothes started following me, he looked like an old drunk.  About 20 minutes later I saw him, and a group of people in street clothes at an apparent meeting in the middle of the store and then he started following me again and at point actually stared.  I got pissed so I walked up and whipped out my cell phone, and took his picture.  He said that he was a loss control manager and demanded that I delete the pic and when I wouldn't he called the police on me, and followed me out as I drove off.

I buried him in the outskirts of Santa Fe.

This reminds me of the "coming out of the closets" threads...

Pics or it didn't happen. :P

I'd have to put it on photobucket and send you a link.  too much trouble.

Are you still on a 56K connection? :P

My internet doesn't make any difference hynal, you can't put in a picture from storage on this site, you have to find a page where the picture is basically the only thing on the page and then put the link in.   So, i'd have to stick it on photobucket or what have you