I had the game delete my saved games three times (so I had to start making auto backups of the save folders :)  After the third time it did it (and subsequent reinstall) it never once gave me problems again.

That is more of a Bethesda problem than a PC problem tho.  Daggerfall is still to this day the buggiest PLAYABLE game ever made!  (my opinion of course, but damn was it bad in that game)

Yea lol. Its such a damn shame because FO3 is my favorite game of all time. It took the spot from X-Com lol...

Anyways Id love to see the PC games stay the way they are with the ease of the consoles personally. Cheaper PC's. And at least 5 year life cycles. If that dont happen PC's will never be anywhere near consoles in popularity.

I may sound crazy, but I hope they continue their abandonment of PC gaming because it's left a hole open for Mac and Linux to get into the fight.  How many people keep windows around solely because of gaming? Windows security is a joke, it runs painfully slow, it's a resource hog -- there's so many ways Windows is inferior to Mac and Linux and Windows ONLY advantage over them is that Windows is where 99% of the games are.

Mac is now on Steam, and while the games are relatively few that number is going to go up.  Steam is the only viable PC gaming platform at this point and now that Mac has their foot in the door this is huge.

Ubuntu Linux is incredibly easy to use and getting easier all the time, and to top it all off its free.  To make matters worse for MS, Linux is growing  if in no other way at least general interest and awareness. If it ends up getting Steam support and games start moving over, performance whores are going to quickly find out that Linux's incredibly low overhead means you can get a shit load more performance out of your system.

I hate ot break it to you, but Mac and Linux security is far far FAR worse than WIndows security has been for the past 5 years. You can crack open a Linux or a Mac machine in minutes, and the best part is that the hole will not be fixed for months so you can fuck anyone you want for a while. In fact, Mac is far worse than Windows in every way imaginable, it's less open, works with less software, and also costss more. There are absolutely NO benefits of a Mac other than it looking pretty, which you can make windows do as well if you know what you are doing.

As for Ubuntu Linux, it is not even close to being easy to use. I know my way aroud it excellently, and it took me 10 minutes to install a program which is not in the package manager. In fact if I didn't know how to program and know how shit works there is absolutely 0 chance I would have figured it out.

So please stop spreading outright lies, because that i exactly what they are.

Actually, more than 1 source for that one, a lot more.

I understand it's a bit unfair of a comparison because there are a ton more windows machines so more stuff will be written for it, but fairness or lack thereof doesn't alter reality.

As far as Ubuntu ease of use, what was this program? Was this a standard thing most regular users would need or something specific for a specialized purpose? I said "it's getting EASIER", but as far as basic use it's already ridiculously simple.  Yup there are problems but for your average write a paper/use the internet types there shouldn't be any problems at all.

OS X is too closed of a platform to get anywhere for gaming.  No one's gonna pay three times the cost of the hardware, and then deal with inferior performance as well.  If Apple cared about gaming (or even trying to get marketshare above the single digits, really), they'd license it out like Microsoft does... but I'm sure they're happy duping the unwashed masses with their propaganda and making shittons of markup on their machines.

It's nice the Valve ported Steam and some of their games to Mac, but I don't think it'll serve as anything more than for the few gamers who own Macs to not have to boot up their Windows machines, or reboot into Windows, in order to play them.  I just can't see anyone going out of their way to buy a Mac for gaming. =

And on an unrelated note, today, we're playing Steam!

It is more secure than any other operating system. Here is the link telling you that you can have windows just as safe as linux, and overall it is far safer:

It is far far more embarassing for the Mac, since they count on not being hacked and the good faith of people, and are just as slow in fixing holes, meanwhile Microsoft is extremely experienced in fixing holes and keeping things secure by now. If you want a safe system, use windows. Also, Macs are hacked the fastest of all 3 systems and Linux and Windows are pretty close together.

The application was Jabberwocky, and it doesn't matter if it is common or not, it should be easy for EVERY application.

As I said, you are extremely ignorant, or you jsut know enough to talk out your ass without realizing you are doing so.

If they move away from PC development, they also move away from Mac by default since its the same coding and programming. If PC gaming dies, Mac gaming will be snuffed out even worse, its kinda like saying that the abandoning of fuel refining will make your diesel car more efficent as opposed to gasoline cars. 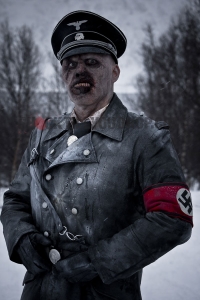 I'd say advertise the hell out of DIablo III and Starcraft 2, start getting massive sales on games for PC again.