Lol, now seriously, the games Sony showed are nothing but Wii Sports wannabes and some party stuff for kids that the hardcore player likes to call shovelware.

Having that "familiar" line up trying to boost a product that is a late copy from another very famous and "better" product, its the same story as HTC mobiles vs iPhone.

But I believe Sony will show some compelling game at E3! Let's hope!

Im not familiar with how they are used!

Well heres hoping they do show something compelling because they are fast running out of time to make any serious momentum before it's decided that the current generation of consoles need to be replaced. By the end of 2010 the PS3 would have been out for four years and even the lengthiest projections for generation length put that at half way or beyond in the current genaration. Im more hoping that what good games they do announce aren't slapped with a 2011 tag like MLB and maybe Killzone 3.

They have until 2012 before Nintendo likely releases a new home console which has improved motion controls, significant performance advantages, cheaper or same price to manufacture and whatever other impressive features Nintendo wants to add that they alone know about. Thats just a 24 month period in which they have to work in, which is why the time-frame on any announced game is so important. What developer would focus on the PS Move when they can get an early break in a new Nintendo generation and tailer their software accordingly?

Exactly, no developer apart of 1st party will bet their horses on a product that will take long to build a large install base to justify big projects, that might come out once the new Nintendo console is released.

Not to talk about that by 2011 PS3 sales may be cooling down. A 3rd place system doesn't sell like the market leader..

You can twist words all you want, but in the end the N64's controller was still not analog.  Though, it's design did allow for greater control compared to a normal D-pad.  It just wasn't as accurate as the potentiometer based analog sticks used in Sony's Dual Analog Flight Stick (April '96), Dual Analog (April '97) and DualShock (May '98).  This is probably why Nintendo switched their tech for the stick on the Gamecube controller, as well as adding a second stick ala the DualShock.

Of course, we could all just shut up about who copied who and give the credit to the Atari 5200 and the Vectrex (both Nov. '82), as they were the first consoles to feature an analog stick.  And even though analog was mostly abandoned after those consoles were discontinued until '95 when Sony started development of their Flight Stick, they were still the very first.

I didn't twist any words. There is a reason why everyone considers it an analog stick, but if splitting hairs makes you feel better then please continue. I'm not here to change your mind.

The article you linked pretty much repeats what you typed, but doesn't actually prove anything. I'm looking for patents, technical documents, even photos of the thing in pieces. You won't find any potentiometers in the N64's analogue stick, but you WILL find an optical shutter method, like those found in old computer mice (before laser positioning took over).

Here's an image of the stick, partly dismantled: 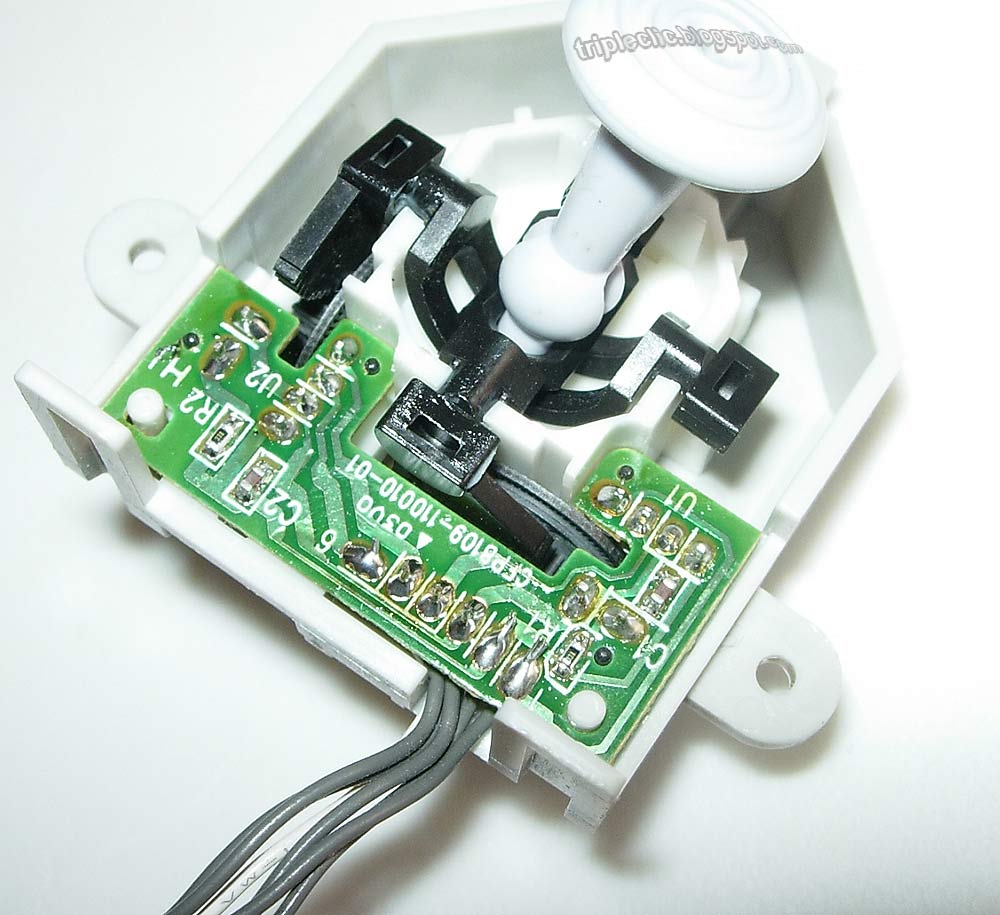 Unfortunately, I can't find an image of the other side of the PCB, but I can tell you that components U1 and U2 are optical transmitter / sensor pairs.

Does it really matter? Thumbsticks exist because of the N64. Sony added their own version after they saw how well it worked for 3d applications. They are both variable input and the only thing that differs is how the signal is transferred and where it's converted into digital. Tech is never the going to be the exact same, but the results are. They can't make an exact copy of another companies product. This doesn't matter though, as consumers don't know or care about the tech. To them they are identical because the results are identical. It's just like Move and the Wiimote+; the tech is different, but the results are the same. The reasons for them being added are also the same - Nintendo showed it works and people want it.

These are companies copying each other and tweaking their copy enough that they won't be sued. That's not a bad thing, it is however a reality. It's how all products get improved upon and refined. This happens in every market and anyone who thinks it's not happening in the video game market is delusional.

Here's a link that shows how exactly the stick works: http://electronics.howstuffworks.com/n643.htm (You need to scroll down a bit.)

While he incorrectly labels it as analog, you can clearly see it works on digital principles. The varying amount of light to the photocell determines the amount of current, which in turn allows the controller/system to know where the joystick is positioned. When the light is blocked there is no change in current, and no change in the sensing of the joystick position. In other words, the controller operates only on a set number of variations/currents, with "dead spots" in between them. While I'm sure these "dead spots" were very small, it still didn't allow as much accuracy as a potentiometer based stick.

Thumbsticks have existed before the N64, as the Atari 5200 and Vectrex featured analog sticks that could be manipulated with just your thumb. And, since Sony had started working with potentiometer based joysticks back in early 1995, they may have eventually put out the Dual Analog, anyway. However, there is no evidence to prove or disprove this, so you may very well be correct, as the N64 controller was the first to have a thumbstick during that gen of consoles. So it may have inspired Sony to develop the Dual Analog, while using the more accurate potentiometer tech.

Your last point is very true, and really was my point to begin with. All companies take existing tech and improve upon it. So to bash one company for "copying", while making excuses when another does the same thing, is quite hypocritical. Really, there isn't much gaming tech of late that doesn't find it origins, in one form or another, in the early to mid-80's. This even includes motion controls.