Forums - Gaming Discussion - "The Uncanny Valley". A study with CGI........Revisited! 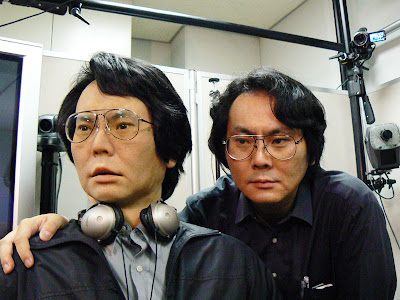 What is it? How is it? Where does it come from? All questions that I'm sure many will ask in here.

This topic is one I did last year and would like to re-visit it for those that missed it.

Why are monster-movie zombies so horrifying
and talking animals so fascinating?

Japanese roboticist Doctor Masahiro Mori is not exactly a household name—but, for the speculative fiction community at least, he could prove to be an important one. The reason why can be summed up in a simple, strangely elegant phrase that translates into English as “the uncanny valley”.
Though originally intended to provide an insight into human psychological reaction to robotic design, the concept expressed by this phrase is equally applicable to interactions with nearly any nonhuman entity. Stated simply, the idea is that if one were to plot emotional response against similarity to human appearance and movement, the curve is not a sure, steady upward trend. Instead, there is a peak shortly before one reaches a completely human “look” . . . but then a deep chasm plunges below neutrality into a strongly negative response before rebounding to a second peak where resemblance to humanity is complete.

Now, with that said, have you ever come across any "uncanny" like figures or beings? If you've played video games in recent years, or watch any CG rendered movies in recent years, you very well have.
Movies such as "The Polar Express", "Final Fantasy: The Spirits Within", and "Beowulf" all have their fair share of "uncanny" beings and figures.

Video games are no safe haven either, with titles such as "Mass Effect", HEAVY RAIN, & "Heavenly Sword" all dipping into the "Valley" at some point.

Now, David Cage (Founder & Director @ Quantic Dream) made a fairly bold statement a few years back that: "There is no Uncanny Valley anymore. Not in real time". It was in response to the original tech demo shown for his, then, upcoming game, HEAVY RAIN. Having now played and beaten the title, I observed his widely creative ambitions, but HEAVY RAIN is still plagued with many "uncanny" moments. It's not so much that the game was bad, but our technology hasn't quite caught up.
This subject is one that I will continue to study for years to come. It's my passion and duty each day, studying and finding ways to clear that "Valley".
Here are some examples, in motion, of "The Uncanny Valley":
Some are pretty creepy right? That "creepy" feeling is known as "The Uncanny Valley". They look human, but something's just not "quite right". The part that's "not right" is what I'm trying to pass.
Imagine when a character, such as.....

.....behaves like a human. The "Valley" will no longer exist. How long will it take until it's done in real-time, who knows? But if we continue to heavily study it, and look for ways to conquer it, it should be in the not too distant future. I hope you enjoyed this little experiment today. Feel free to contribute "uncanny" footage, pics, media of any sort. I'd love the contributions as I'm still learning a lot and seeing a lot on this subject!
In the meantime, I leave you with something that should make you feel a little "creeped out":
http://www.motionportrait.com/about/demo_face_01.html
Check that out!

I can answer just about any question on this as well.

Which just shows how far and how quick this is progressing.

I'm an animation student so I'v had to look into this a lot. Its really fascinating how the slightest unnatural movement or feature can throw away hours of work.
heres my fav video demonstrating the uncanny valley. This guy really well explains the whole topic, aswell as adding some humour. Check out his other vids as well, theyr all pretty enlightening.

I agree about the progression though.

I remember this video.

Although comical, it's very informative.

In my opinion, Video Games are a unique medium where they don't always have to have a face that looks 100% 'real'. Just look to games like Final Fantasy, Dead or Alive or World of Warcraft and you'll see that its even preferred that they have a different style over 'reality', even in their CGI cutscenes.

However, when speaking of the in game graphics, that is the graphics of the gameplay when controlling the characters, I feel the real problem game developers are having is trying to capture the motion of characters. For years now, graphics have been making leaps and bounds each generation. And we're coming closer and closer to being able to mimic thousands of facial expressions and real time events without even needing CGI cutscenes.

However, more and more, the major problem has been the way these characters move. The characters still move with set patterns and even with those set patterns, the 'uncanny valley' if you will, or as I call it, the 'programmers limitations' shine through. We're still seeing the same arm motions, the same head bobbing and the same running animations as we saw over 15 years ago. Did some group of programmers, possibly at Naughty Dog and Rockstar, come out and make ALL the motion animations for 90% of the games out there? Because they seem to be showing up across the board, and unless you're working on an obscure Wii title, a PC exclusive or a 2D game, they're mostly all the same. From the jerking gun twist in Mass Effect to the sliding run in Halo, this is what I truly call the 'Uncanny Valley'. And I think game developers should stop worrying so much about how games look and focus more on how characters move and interact.

Hey CGI,
Any idea if the effect of the uncanny valley be diminished through exposure?

Also, do people who grew up watching CGI and playing video games have a different response to animation in the uncanny valley?

i find this pretty uncanny: http://www.motionportrait.com/about/TIminoriHair.swf

The biggest problem i had yet with computer generated humans, was in the Movie "Beowulf" for me the people remined me too much about the humans in "shrek" to take the movie seriously.