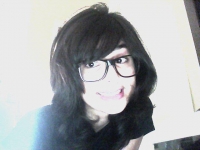 Don't Forget To Save 10 status updates.

Happy valentinesday! enjoy the day with your loved ones!

Yes!! So glad someone knows it! XD Huge Air fan here, haha (or pretty much anything I've seen of KyotoAni so far).

Agreed! Admittedly, I haven't seen Kanon yet, but I definitely will in the near future. Hmm, ever seen Ef?

Ef is one of my favorites!!! Ef a tale of memories and melodies. Watched them both! Which one was your favorite? I loved them both and i CANT choose.

I'm sorry to say I haven't seen Melodies yet. :( I've been planning to watch it this summer once my classes are over, and I actually have time. >< But agreed! I loved Chihiro's and Miyako's stories! Admittedly, I did like Clannad and Air a tad better, but Ef was still amazing. I've been really looking forward to Melodies. ^^

It's not Zura, it's Katsuo.

I dropped my mobile into the toilet....YES!

I hear this happens a lot (my cousin did it with her 3 day old phone which was a replacement for one that broke when dropped in the toilet) Do people actually use their phones there or is this a problem of insubstantial women's pockets?

I grew a beard simply so I could keep my phone there. I'm also too poor for pockets *2nd world problem*

Did that once, luckily I recovered it in time and it works perfectly. It's an Android phone as well.

It's a lot more impressive than mine, which is like 3. I didn't realise how much I suck at Uncharted until I went online xD

LOL xD I suck too! I just played online A LOT,

Some people online are so good...you take a step...and you're dead

Damn I hate playing online shooters on consoles >_>. I swear, some people must be cheating with a mouse and keyboard or something.

Pc gaming is impossible for me xD

Pc gaming is impossible for me xD

Never, us console gamers only use Mouse and Keyboard for what they are meant for: surfing interporns and posting on vgchartz. (jk iceman)

Bought skyrim but i have to finish Deus ex before i start it >.

happy bday! How long have you been gone?.

Haha xD Thanks but it's not my birthday! It was when i wrote that xD (April) I've gone for a pretty long time....a year maybe xD? Well, I'm back now! (time to spam :D)

D: awww, i was looking forward to spamming the forums T.T I'll try but i don't think it's possible D: lol xD lol i like your profile picture!

For spamming. Want to talk about it ;)

Oh, you're slightly younger than me, happy birthday then.

Hi Kazukis can't be on computer now, I tell Kazukis your message he say "Cool, nice to meet you too ^^" -Jiro, Kazukis' cousin

Kantor posted something on invisible29's wall:

If by hawt, you mean pretty disturbing, then sure.

Kantor posted something on invisible29's wall:

invisible29 has 96 friends (view all)