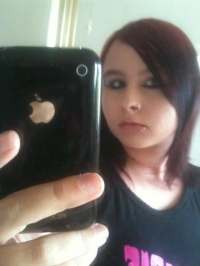 L2: Peon (68 until level 3)
Kymmi1989 my agent forced me to take this.. im really a shy girl but it is what it is atleast no nudity right

Why do you deprive us? Your beauty is unmatched in this whole world...

Come back. We need sex!

lol scrolling through my friends list and I find her... good times =')

ask for my whatsapp and send me them nudes

Wright posted something on Kymmi1989's wall:

Sent a friend request, for the thrills!!!!

Awww, how come I always miss the fun? What have I missed this time?

apparently "she" thinks VGC is the best place to find your dream man, your knight is shining white armor.

I'm here but sadly the armour is rusty now lol.

Awwwww shucks. :/ Her posts are hilarious.

Well... that was fast Kresnik! The ban is short so you will be back in no time Kymmi, do as Kresnik says next time and put some words into the OP,

Oh and welcome to VG Chartz.

Oh and keep your clothes on please, I will have nightmares for weeks now lol :)

Banned for spam, lol lucky it wasnt for those pics

those pics went straight into the mod archive ;)

How many people are on your blackmail list, Barozi?

Good decision getting rid of that last profile photo

my agent forced me to take this.. im really a shy girl but it is what it is atleast no nudity right guys?

yes :( I feel violated and want to take it down asap

Lol not bad but seriously are you someone else posting this girls pics for revenge?

Then remove it, not very appropriate for a gaming site, maybe if you had a controller or something in the pic it would be ok lol.

Hello. What are your favorite Games ?

hun the list would take forever.. the one im enjoying the most is the witcher 2 grapics all maxed out and you?

The List will also take forever. I like the Final Fantasy, Resident Evil series although the newest parts were not so good. At the moment i play The Last Of Us.
Many greetings from Germany and have a nice weekend.

I just want to say to the guys that are close and will to hit up a pop and have a few drinks thelt me see ur system and havin a blast with It... that is my type of night lovs.... most girls might hate that... im basically a mans brain in agirls boddy :) rare

Proclus posted something on Kymmi1989's wall:

Gotta help me out on getting your facebook hun, really can't find you. :p

Proclus are u a girl thank god!

proclus are u a girl?? than god hun

We'll sort it tomorrow after I sleep some. Xx :D

tbone51 posted something on Kymmi1989's wall:

So what sort of gamer are you? Ninty? Sony? Xbox? PC?

Honestly I think they all bring something special to the table.. but in this gen I think im gonna vouch for ninty, sony, and pc :)

I generally tend to follow that philosophy myself, and I must say you have quite the winning combo there.

Kymmi1989 hasn't added any games yet!