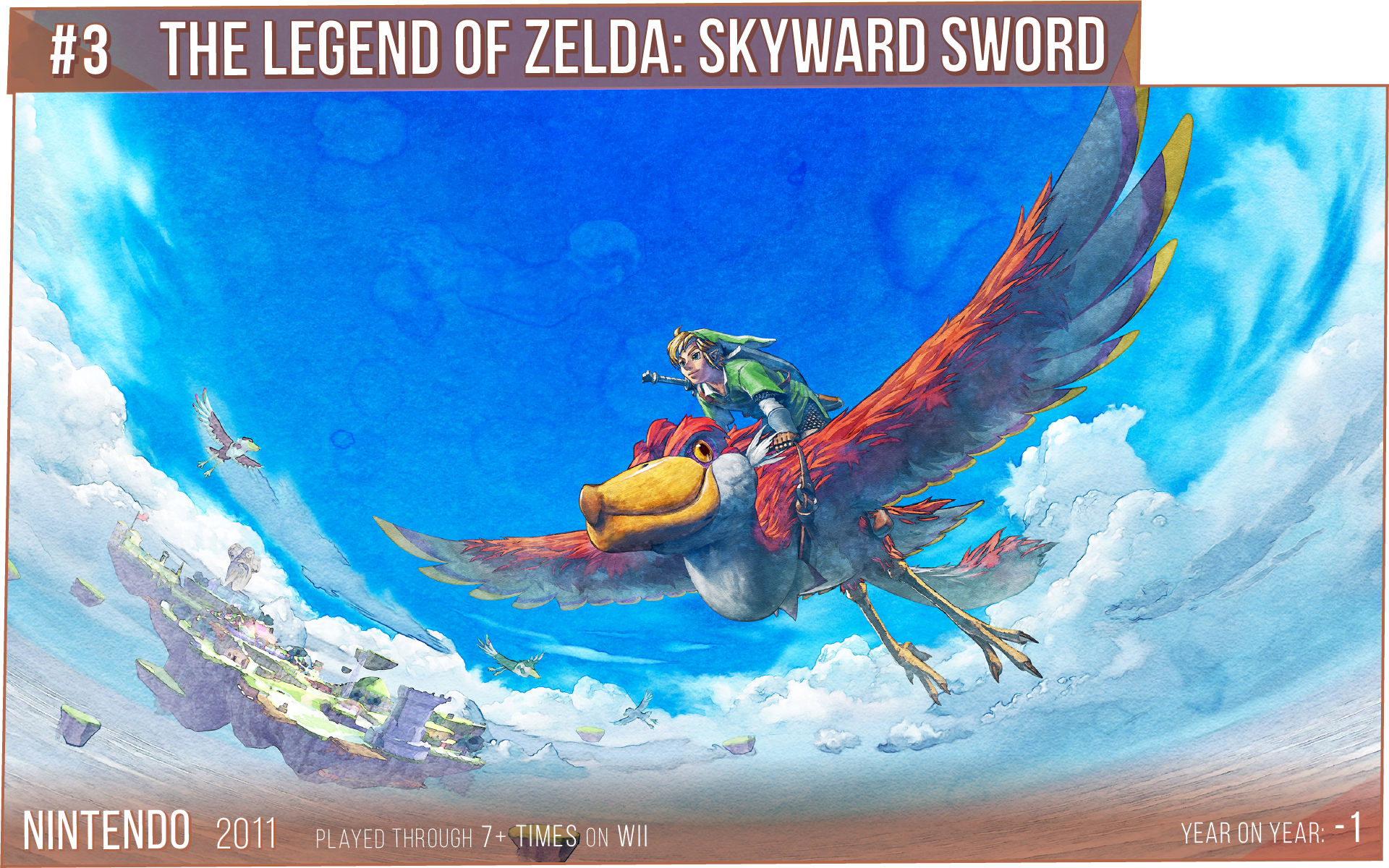 I feel the need to start this by sharing this remix of Lanayru Sand Sea, because it really gets me in the mood to talk about this game. I love it.

Man, where to begin with, with Skyward Sword? I've said so much about it over the years. It was my #1 for the longest time, then #2 for another few years, and now it gets dropped another spot, but my love for it has never diminished. If anything, I thought this could've been the year it reclaimed its former place at the top of the list, what with the HD version finally coming out, but things ended up taking a bit of a wildly different turn after two shock announcements at E3 made me reconsider the gaming purchases I'd make with my money. Not a wealthy year for me, that's for sure.

Anyhow, I don't need no remaster to remind me of how much I love this game. When I was getting into the Zelda series, somewhere back in 2011/2012, I didn't have a Wii and Skyward Sword was this elusive thing I constantly dreamed of playing. I tried emulating it and that was predictably a big failure, but even in that little glimpse of the opening, I already felt something truly magic going on. When I finally got the chance to play the thing for real, I was glued to the screen - and the Wiimote to my hand. It felt like I had been transported to a different dimension and I dreaded having to go to sleep or whatever. Skyward Sword was all there was. I don't know what exactly it is about it that did it for me that didn't do it for many others, but it was there. For me it was just pure magic from start to finish... of the first playthrough, and then the second, and the third... I was playing it on a friend's console, and on the morning of the day after I first beat the game, he was leaving and taking his Wii with him - I woke up immediately and begged him to lend me the system for a while. I needed more. He didn't use the thing anyway.

I think it's a shame that even after the new version, this game still doesn't get the recognition it deserves, but I can't speak for its critics. For all I care, this is the greatest Zelda game, and I doubt it'll ever be surpassed. It's possibly the only Nintendo-developed game with a truly powerful narrative filled with characters I genuinely cared about, and it did that within the world of a long established and beloved series - a world it expanded greatly on and strengthened, rather than being confined by it. Skyward Sword is an honest to god masterpiece. It might not be alone at the top here, but it'll always be number one in my heart. And I don't care if that's the cheesiest thing I ever said.