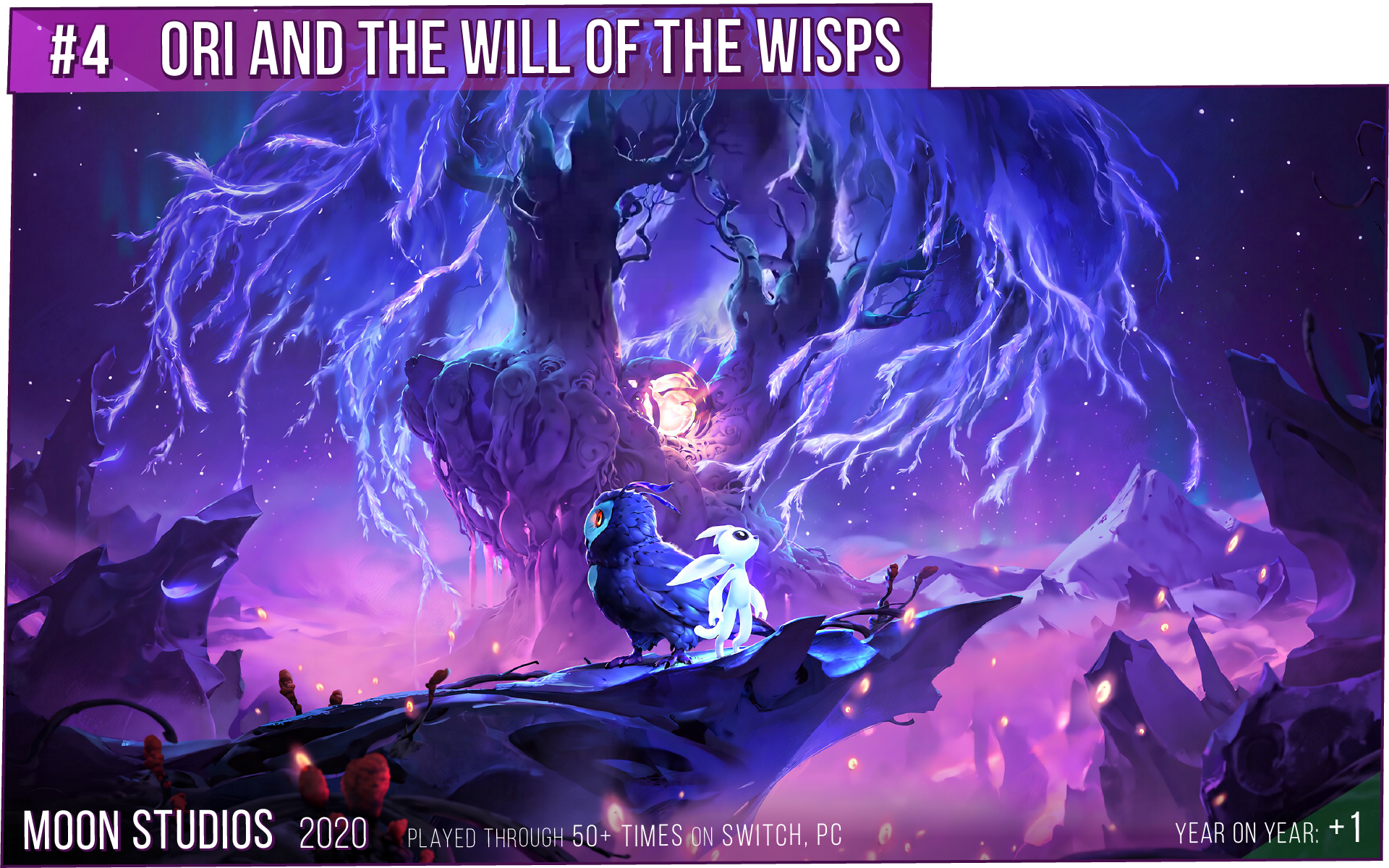 I gotta say, when I wrote those words at the end of last year's post about Will of the Wisps, I didn't really believe Ori was gonna stay in the top 5. Back then, it getting into the top 5 itself was a really tough call against two more established games on the list - I thought maybe it was just the recency bias that pushed it ahead of the pack. But, here we are, a year later, and it's gone up. Granted, its rise to 4th place was also a last-minute toss-up, but even if I made the other decision on that toss-up, it did move ahead of an all-time favorite of mine in Shadow of the Colossus.

Another thing that changed from last year is how it went from 4 playthroughs to more than 50. I bought this game on PC somewhere around the turn of the year, not sure if on December or January, and after playing through it a couple more times, I decided I wanted to try some speedruns. Not with any lofty goals in mind, just, I enjoyed the game and its movement so much, it'd be awesome to push myself to get better at it. I chose to run Main Quest Order, as that's the "no major glitches" category that's basically like doing a casual playthrough as fast as possible, and from then on, things were never the same again. I'm glad Ori is so incredibly fun to go fast in, but even moreso happy that my love for it has remained intact even after all this.

The biggest takeaway from speedrunning, though, other than the awesome feeling of getting really good at something (I'm in 3rd place as of this post!), was how it got me into a wonderful community filled with lovely people. It's just an online thing really, and it's actually a pretty small community all in all, but it sometimes feel like home, and that's a place I've needed in what was a second entire year of dealing with this global pandemic thing - in all honesty, I didn't mind it in 2020, it was only this year that I started getting really exhausted from the lockdowns.

Anyways, all speedrunning aside, the reasons why I love Ori and the Will of the Wisps are the same as they were. It has fantastic gameplay with really fun (and deep) movement and level design, and even surprisingly great combat; it's got characters I care a lot about and a moving story featuring an ending that could've drowned me in tears; its art direction is beautiful like nothing else out there, and the score by Gareth Coker is still easily my all-time favorite soundtrack (with maybe my favorite song ever?). It's a game I'm happy to replay over and over and over and it continues to be just as special. It feels like in any day of my life, no matter how bad things get, I can turn this on and it'll wash all my worries away in an instant. That's just what this lovely little spirit does.