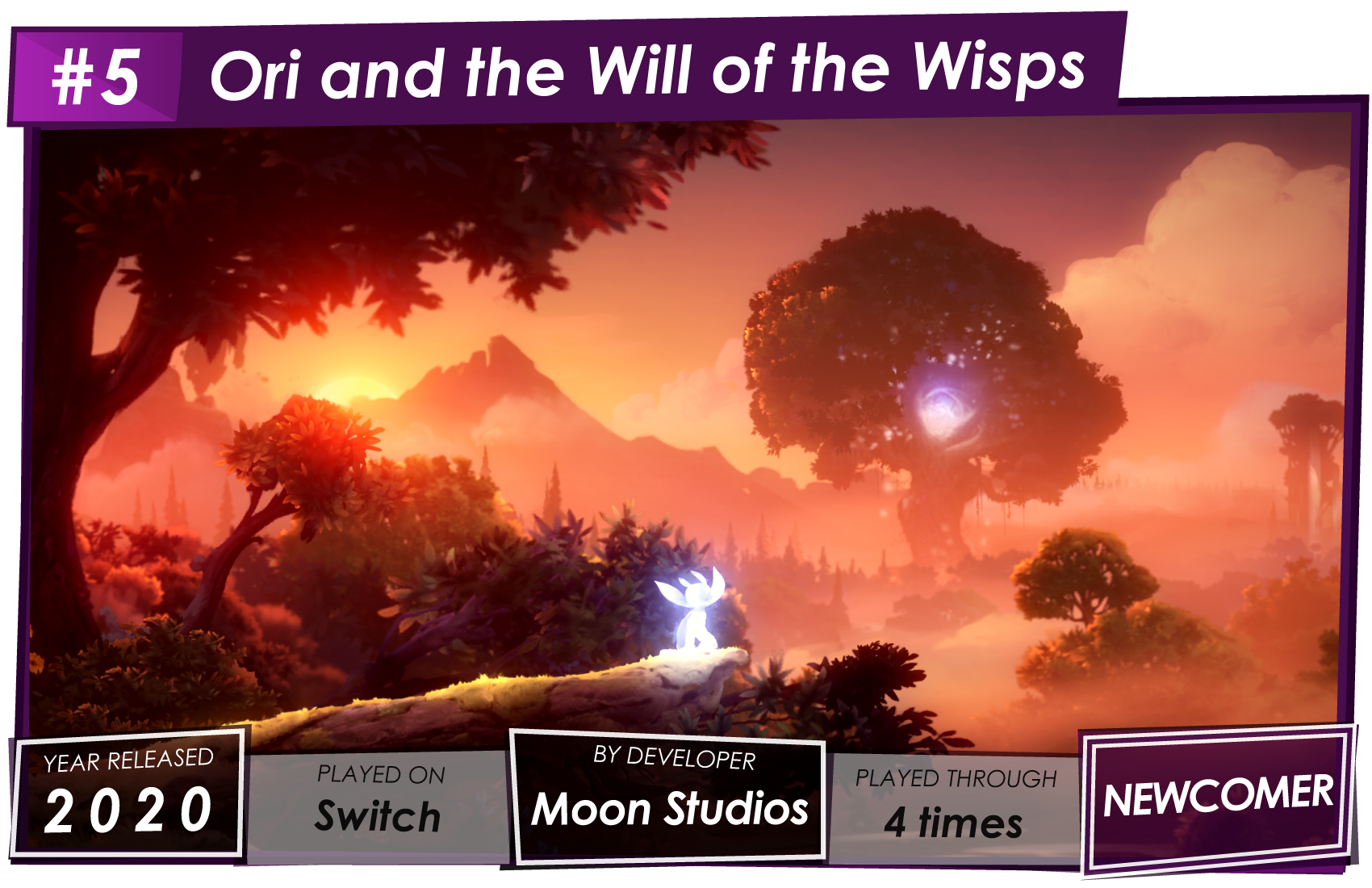 Alright, I've done my fair bit of gushing about this one, now it's time to...

I'm a bit of a sucker for things that get me emotional, something games usually don't do, but damn does Ori succeed at it. Blind Forest was already a deeply emotional experience for me, but Will of the Wisps took it to the next level, as it did with everything. This was one of those games that had me hooked from the first minute, constantly rooting for the good guys, hoping that things would always turn out okay even though knowing that not all would - and everytime something bad happened, the floodgates opened quite fast. It wasn't just the protagonists either, just about every character I met on this wonderful journey, even the most irrelevant ones, even the unnamed ones, had me rooting for them and wishing them well. Everything about this game resonated with me on a level not many, if any, games do. The way it toyed with my feelings at every turn was quite something, and how it made me cry at the end was something I don't think I'd experienced since watching a certain movie in cinemas some three and a half a years ago.

Of course, even if it's so impactful, the story in Ori and the Will of the Wisps is, like its predecessor, kept very minimalistic and simple. It's told through few, short, and very poignant cutscenes, which make up a small portion of the amount of time you spend, you know, actually playing the game.

Thankfully, the game is nothing short of incredible. Ori always felt great to control, with fast-paced, fluid movement and lots of awesome platforming abilities. Will of the Wisps makes the most of this, by keeping all of the first game's best abilities, and reworking the less interesting ones into far more intuitive and fun versions. It ditches just about none of them, though some are changed drastically enough to the point of being renamed, but it still manages to do away with the first game's issue of overloading the controller with too many options for too many buttons. Instead, despite having far more options at your disposal here, the game never feels awkward to play.

Another area in which Will of the Wisps greatly improves on its predecessor is in its level design. Blind Forest was a fine enough metroidvania, but its best qualities were always centered around the platforming and never about the exploration. Will of the Wisps knows this and keeps its level design straight to the point with well-defined progression points and self-contained levels which feel more like something out of a Zelda game than a metroidvania. Despite this, it still manages to feel like a more cohesive and believable world than the one from Nibel, thanks in part to a colorful cast of characters that pop up everywhere, but in larger part due to the level design focusing on more natural obstacles - too often in Blind Forest the levels you were traversing felt really game-y, with weird traps and contraptions and deadly lasers that made no sense for the environment they were in, but here in Niwen, everything you're doing feels a lot more cohesive with the world itself, while keeping the challenge factor intact.

Then, of course, there's the combat. This one's quite obvious, really, it was the main focus here. Blind Forest's combat was just a bonus thing, something that usually felt inconsequential to the gameplay, because the developers knew the platforming was the best thing about the game - Will of the Wisps reworks the whole combat system, giving Ori lots of new tools and weapons to use in a deep and rewarding combat system that feels like something out of a hack and slash game. Despite this, the platforming remains the game's biggest strength, and the developers know this, so they made this combat system amplify the platforming even more. Swing your sword while in the air and you gain more horizontal distance; swing it upwards, and you gain a little bit of height; hit an enemy while in the air, and you recover your double jump; use your bow in the air and you cancel your aerial momentum. The list goes on and on, and it's only amplified when combining it with awesome mechanics like the Bash, making for a ridiculously awesome platforming experience where it constantly feels like you're just flying through these levels, and whenever enemies show up, they're only an additional opportunity to stay in the air for even longer. And that's not even getting into the boss fights, which, while not all amazing, can reach breathtaking heights - whenever I make my "Best bosses of the 2020's decade" thread, I know this game already has two very worthy contenders.

It's all too awesome, really. That's not even getting into the artistic aspect of things, which, well, I think you know how I feel about that one.

The art direction is unreal. Blind Forest already looked gorgeous, but Will of the Wisps is just... well, I don't even know how to describe it. I've never played a game this beautiful, that's something I can say with ease. The world of Nibel is so wonderful, and so detailed. Every area, every background, every character, everything pops out in a way that never feels too overdone and always just right. The use of color here is so good it made me feel like I was seeing new colors, every area sporting a combination of two or three tones that fit so perfectly with each other. When you get down to the technological side of it, seeing the insane work that went into lighting each individual asset in the game from different angles, drawing the whole game's world without copy-pasting anything, it's... I've no words for it, it's crazy.

And the music is something I've talked about plenty too, but in recent weeks I've come to understand that this isn't just one of the greatest video game soundtracks, it is the soundtrack, my absolute favorite out of all of them. All that emotion I was talking about earlier, I feel like the music is at least 50% of the reason why this game hits so hard for me. The orchestral score feels so profound and grand, it feels like the music is everywhere, even if you're listening to it in a crappy setup or small earbuds or whatever. It's a feeling I really don't know how to describe, no music's ever sounded like this to me. From the wondrous main theme, to the soothing atmospheres of Inkwater Marsh, to the mysterious tones of Kwolok's Hollow, to the epic escape and boss themes, to the deeply emotional ending (beware of spoilers here!), the music is always phenomenal - it doesn't just match the tone, it sets it. And while all of it sounds original and unique, there is one song in particular that I, as musician myself, feel is a massive achievement in music making: Shadows of Mouldwood. This track sounds like nothing I've ever heard before, not just in its production and mixing, but also in its composition. The way those strings sound, how they ascend and descend in volume and pitch, never quite keeping it in unison but never quite forming a predictable harmony, always unsettling in just the right amount... and how they then mix up with the moody piano melodies, and occasionally more percussive sounds... It's music unlike anything else that's been done, really, it's a genius track that really showcases the very best of Gareth Coker, and probably sets a new very best for him too.

It's hard to put my feelings on this game into words, which is probably why I've ended up using so many of them

. This is a real work of art, a real masterpiece, a wonderful coming-of-age story with poignant moments of joy, dread, anger, and responsibility. Its themes resonate so strongly, and are so perfectly told through its wonderful art, wonderful music, and wonderful gameplay. I did have my doubts for a while with its placing on this list, and at points it felt like a toss-up with Hollow Knight and Breath of the Wild (@Platina knows), but once deciding on this ranking, it felt absolutely right, and it still does. Ori and the Will of the Wisps is just so special. It's an experience I'll never forget.

Welcome to the top 5, you lovely little spirit, long may you stay.