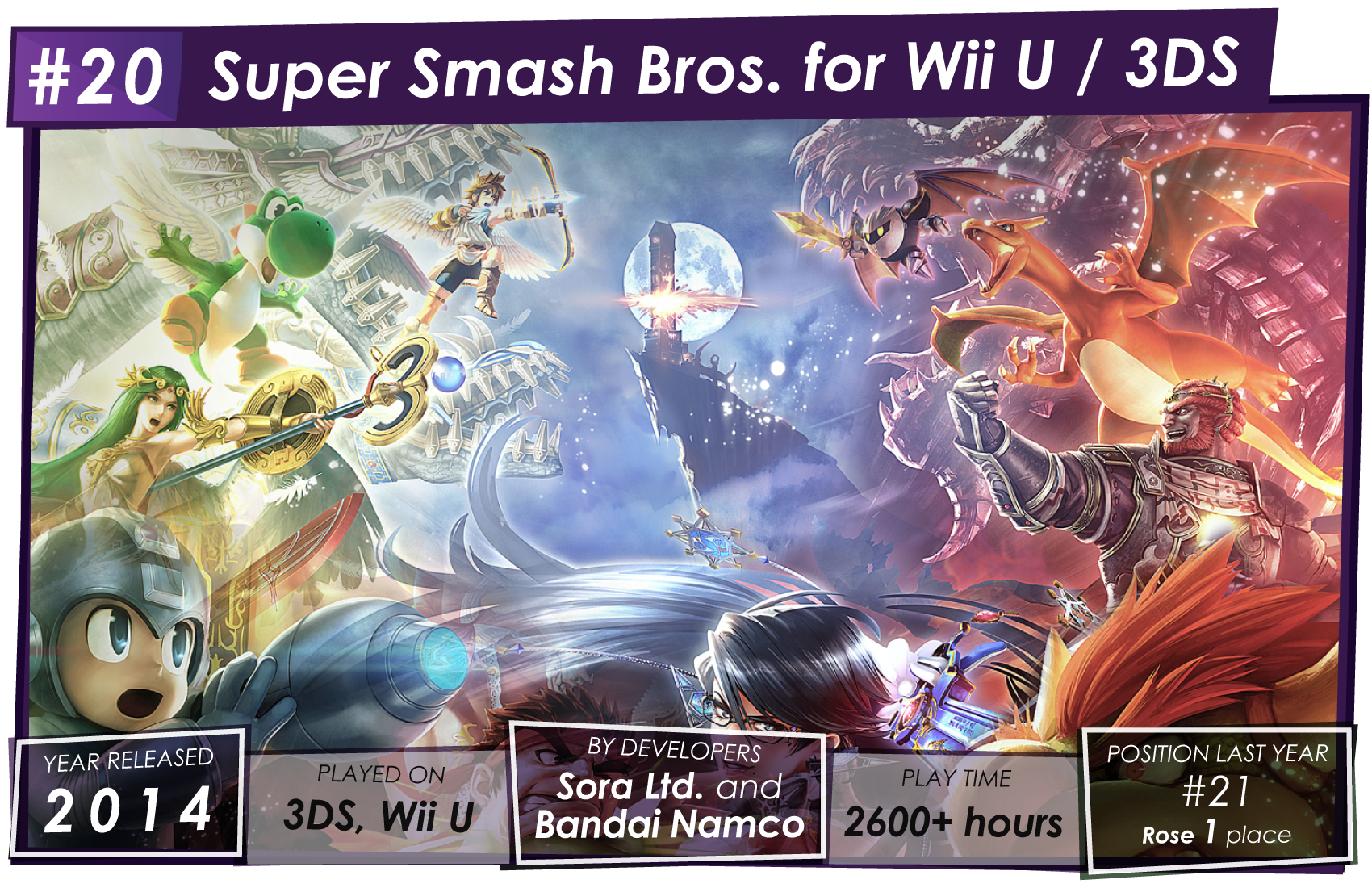 Last year, Smash 4 had a steep decline on my list, in large part due to Ultimate overshadowing it. This year, Ultimate has been dropped from the list entirely, and Smash 4 barely moved. It's a bit funny.

Anyways, this is certainly the game to enter the top 20 with. The games that've made it in this year are, maybe with one or two exceptions, the 20 - these are all games that have had a really big impact on me and mean a lot to me. I've found it harder and harder to rank competitive games over the years, which really put Smash 4's position up in the air (everything from #20 to #30 was up in the air, really), but eventually I decided it had to be this one because this is the game that's really made its mark on me as a person.

When I started competing in Smash 4, I never imagined I'd take it as seriously as I eventually did, but over the years I've shifted away from the competitive mindset, and started to embrace the social aspect more - the fact that, because I was competing in this game, I got to meet a lot of new people and make new friends. Given how many new friends I had been making prior to this (none), it's not an exaggeration to say this game changed my life.

Beyond that, it was a brilliant game too. The gameplay was quite slow compared to its successor, but it was just fast enough to still be exciting while maintaining the tactical feel of Brawl. The mechanics were taken from Brawl and refined and tweaked to work in a more competitive environment, the balancing was a lot better with a lot of the cast feeling viable, and visually everything was made more colorful and impactful. For all its strides forward, it also had its fair share of issues, of course. There were some broken or stupid mechanics. The cast was thrown entirely off-balance by the overpowered DLC characters. Erm, there was no single player campaign... does this one matter? Maybe.

Either way, it was just really special for me. I miss going to Smash tournaments and competing regularly, meeting new people and all that. Unfortunately, Ultimate's made that impossible for me as it only brings me anger and frustration, even when winning. So, I'm leaving Smash behind as a thing of the past, and 99% of the good memories I've made were with Smash 4 - thus, it earns this spot on the list.