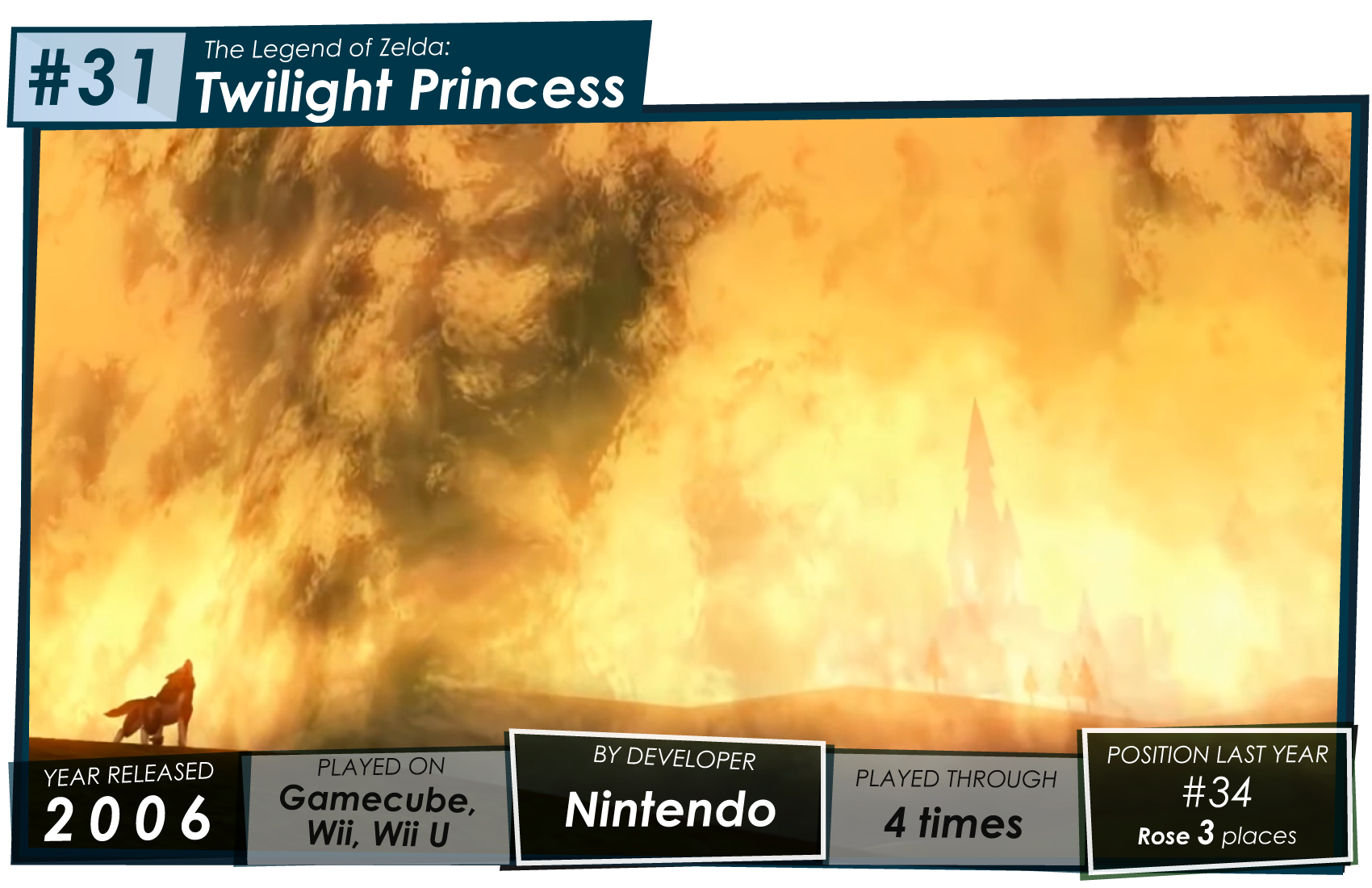 3D Zelda is finally here! Starting off with the edgy one at #31, I think it's pretty safe to say these games are all amazing, if this is the worst one. My opinion on these has changed a bit over the years, but Twilight Princess is likely to always remain the worst ranked one due to it being the only one that doesn't feel genuine. It's well-known how this was originally supposed to be a sequel to the colorful Wind Waker, but was changed at the request of Nintendo of America. The end result is... well, it's a fantastic game, as expected from the Zelda team. But it's a fantastic game that feels very artificial. I can't pinpoint why exactly that is, it's just... everything feels kinda fake, like you can tell that the developers were forcing themselves to make stuff gritty for the sake of it. It didn't help that they went for an 'epic orchestral' kind of soundtrack without employing, you know, an actual orchestra.

Anyways, this is also probably the game where the traditional Zelda formula really began to show its shortcomings. The wide variety of items you acquire, only to use each one a handful of times. The vast fields you can explore in Hyrule's overworld, which also feel entirely empty and are only there to pretend that the game has something of interest between the major dungeons. The duality of having a light and dark world, except the dark world doesn't really offer anything interesting gameplay-wise, instead adding some really boring sections. The story and progression making a big plot "twist" after you finish the third dungeon and get the Master Sword, which at this point is as surprising as Microsoft announcing a new Forza game. When thinking about why Nintendo moved away from the Zelda formula, I think Twilight Princess here is the game to look at - even if it's likely not the one they looked at...

But still, it's a great game. The dungeons are awesome (except for the few that suck ass), the new items are really cool even if underutilized, the music is great if you pretend it's being played by actual instruments. The game features some pretty memorable moments, like when you're chasing Skull Kid in the Lost Woods, and that one where the sad piano music is playing. The bosses are pretty cool looking, even if the battles are way too easy and often feel like puzzles. Hardly anything, if anything, in the game is bad. It's just that most of it feels like it could have been a lot better.