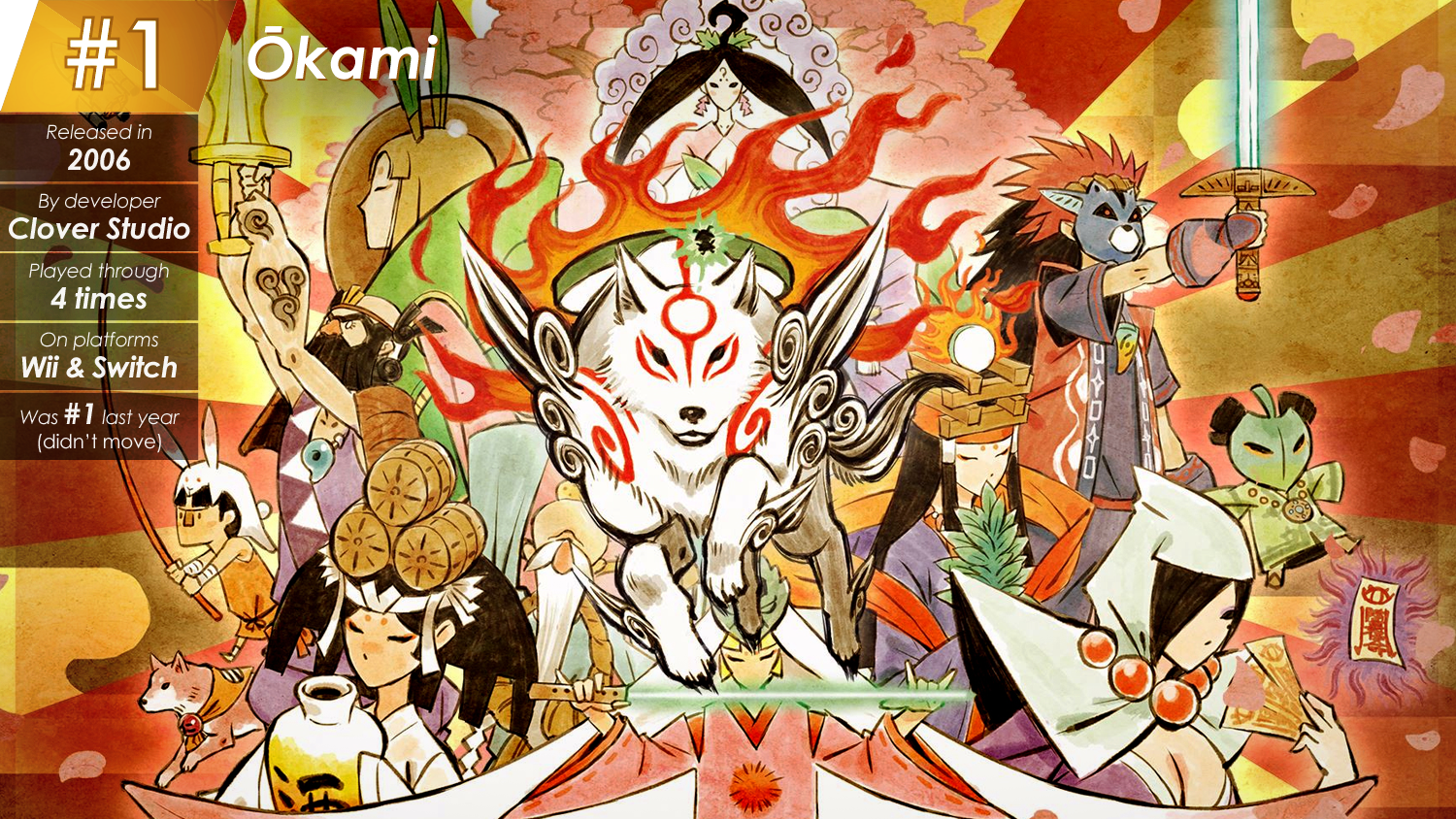 So, here we are again. If this was a decision I made with plenty of uncertainty last year, now it was something I didn't even have to think about. Playing this game on the Switch - its best version yet - is an experience that greatly augmented the enjoyment I get out of this game, and having played through it again this year, once more around August or thereabouts, it's unadvertently becoming a bit of a yearly tradition for me. Without a shadow of a doubt, Ōkami is my favorite game of all time.

The thing I probably like most about this game is how it toys with feelings. The humor is spot on, the emotional moments are actually touching, and the exciting moments all get you hyped. But it's the way the game throws these at you: these moments aren't separated far apart from each other in order for the player to go back to a "neutral" emotional state - no, they're usually thrown together one right after the other and that only amplifies the investment you feel in this world and its characters. It's often that you find a silly side character you're just having fun with, then suddenly they say something that makes you feel some heavy shit. And, it's awesome. In terms of writing and storytelling, there's nothing out there quite like Ōkami and even though I've already played through its story four times now, it still gets me good everytime. It's a work of art that, admittedly, can't be appreciated by everyone, but for me it is the best thing out there.

I've talked a good bit about this game before, with both my review and my post last year being quite lengthy, and I believe those explained my feelings better than anything else I can try to write now. It's everything with this game, really. The whole vibe of it, how it's based so heavily in Japanese folklore, and how it makes you feel like you really are inside an ancient legend - all the locales and scenery, the gorgeous art style, the incredible soundtrack. It all works so perfectly, and it's just a beautiful thing to experience. On that note, this year I've chosen a song as my favorite videogame track of all time, and of course, that is The Sun Rises.

And now, well... we're done here. This year's event is over, and always a bittersweet ending it is. It's fantastic that we can end it by talking about such great games that we love so much, as is the case with me and Ōkami, but conversely it's also sad that this moment, the best part of the event, comes right before it ends abruptly. It's just how things are, isn't it? Regardless, it's been a pleasure to host and partake in this once again, and hopefully this tradition can continue on well into this new decade. Of course, this year's event still has a little more left in store for us, with the upcoming Results threads.