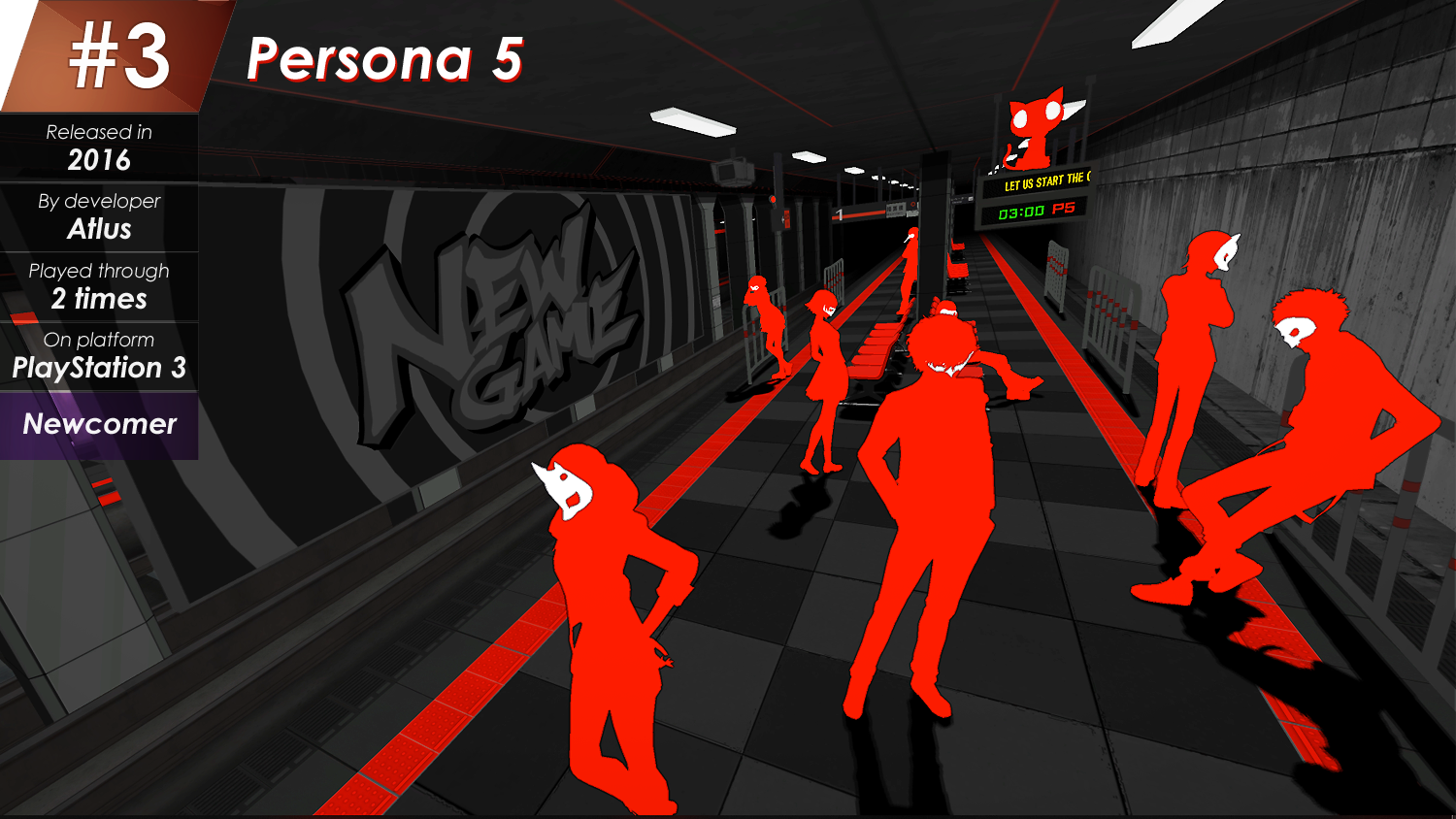 So, finally, after all that playing dumb and silly drama and stuff... It's time. as our power grows, tryin' to stop us shows, might as well go try'n stop time
Some of you may remember I've already written an in-depth Persona 5 review earlier this year, though admittedly it was one dedicated only to those of high culture. I'll speak about it in more conventional terms this time.

I'm not sure what to begin with here... Well, I guess the best place to start is with the actual beginning. The Persona series has never been my sort of thing, as has always been the case with most JRPGs, but I remember when this game was coming out and everyone was so hyped, I got interested in it too - however, I was too busy playing Breath of the Wild non-stop to actually think much about anything else. Ever since then, though, this game was always one I had an interest in playing, despite knowing absolutely nothing about it beyond seeing some random artwork here and there, if even that much. A lot of time passed, and of course, I never had a chance of playing it since I don't own a PS3 or PS4, but then, in December 2018, something wonderful happened: on the night before Smash Ultimate's release, Joker was announced as the game's first DLC at the Game Awards. Seeing that trailer, I was made up to know that surely, finally, I was going to get to play Persona 5 with the inevitable Switch port... right..? Well... Now we know that isn't exactly how things turned out. Instead, Joker was released as a Smash character, along with several other Persona references meaning now I knew some stuff about the game (I didn't want to know anything!), while still having no prospect of ever getting to play it. At that time, I was getting into PC building because my old PC started faltering - and coincidentally, a couple months later, I found that some people I talked to were actually playing the game on an emulator. I never expected a PS3 emulator to be playable, especially given how crappy the PS2 one is, but from then on it was game on. Say what you will about me playing Persona 5 ilegally, I was willing to throw money at Atlus if they put it in a platform I own - that said, I did buy the game as a gift for a friend who has a PS4, so I'm almost morally okay here. I guess. Maybe.

So, two and a half years later, I finally got to play the game, still not knowing much about it. There was this thing about the game, the same thing that probably got me interested in the first place, it was one of those where I just knew I'd like it. But I wasn't expecting to like it to this extent - I beat it in just 10 days! Persona 5 is really, really special. It's part serious societal message, part crazy supernatural fantasy, and part standard anime fare - and at all those three things, it is absolutely exceptional.

I never thought this would be such a dark and mature game going in, but it was something I was very happy to find out. Very early on, the game already makes it clear that it will delve deep into serious subjects such as sexual abuse and suicide, and as the game progresses there are more serious topics it touches on, but despite the general optimism and positive way the game treats everything, it is never superficial when it addresses these things. It's a game that knows exactly when it was releasing, and the state of the world it currently exists in. Everywhere over the globe, politics are heading backwards with crazy extremist leaders, while people seemingly get brainwashed into insane ideologies by silly catchphrases and short-sighted ideals. In the world of Persona 5, it's no different.

The supernatural aspect of it, then, is a perfect counterbalance - by throwing the characters into the Metaverse - a universe of human cognition - to solve the issues of society, you get to explore all sorts of cool twisted environments such as pyramids and flying banks, while still keeping things grounded in human reality in a way that's incredibly on-point. The flying bank floats over a city of walking ATMs, because that's how the mafia boss sees people. The shut-in who has had her mental health destroyed by a shady corporation has her room become a closed-off pyramid in the middle of an empty desert. All of these things are an incredibly smart way to both address serious psychological issues, while also delivering some cool locales for you to "steal hearts".

And throughout all of this, Persona 5 is still very much your typical Japanese story. A colorful cast of characters, obviously each sporting a different hair color, and also obviously including a talking cat mascot, who all team up to defeat evil and stuff. It's pretty standard in nature, but it's well-written and executed flawlessly. So, it works. By making you care about the characters that come close to you, and creating a certain disconnect between those characters and everyone else, the game does a great job of empowering you in what is basically a "Us vs. The World" mission - so perfectly fitting for all the themes the game touches on. On top of all that, I have to say, one of the late game plot twists here was among the craziest things I've ever seen in the medium.

Gameplay-wise, it's also phenomenal, keeping things balanced between the fantastical Metaverse and the real world, either of which would get annoying and repetitive without their counterpart. By having real world interactions affect the cognitions you enter, and Metaverse missions changing real world people, both sides of the game are made better and more impactful than otherwise, and they combine for a JRPG experience that always feels fresh and exciting.

Of course, a lot of it is down to style too. I'm not a graphics whore kind of guy, but I'd be lying to myself if I said graphics weren't important to me, and Persona 5 is one of the prettiest games I've ever seen. Everything about it oozes so much style, it's impossible not to get on-board - the UI and menus are absolutely gorgeous, the artwork and character portraits are filled with charisma, the cel-shaded artstyle works perfectly. Everything about the game has so much personality, even the characters' idle poses in-battle looking like something straight out of a comic book. It's just beautiful, always.

To make matters even worse, the game's soundtrack is actually the second coming of Jesus.

Seriously, I can't speak highly enough of this game. If there's anything I can find wrong with it, it's that long filler segment between the 4th and 5th palaces, and also the 5th palace itself being pretty poor, although it is still awesome story-wise. Other than that... nahh, it's perfect.

If I had to narrow it down to fewer words, though, I'd say Persona 5 is a generational masterpiece - in the sense that it is literally a masterpiece of this generation, because of how it feels so coherent and in-tune with the world we currently live in, and it's so on-point at tackling the issues, both large-scale and personal, that we're all currently going through. How it ridicules the mass media and outrage culture of today's internet. How it criticizes societal issues like sexism and extreme workload. How it shows the severe stress and damaged mental health so many people have to endure because of abusive authorities. Everything about Persona 5 feels completely real and true to the world we live in, except, of course, for the Phantom Thieves - I can't help but wish they were, too.