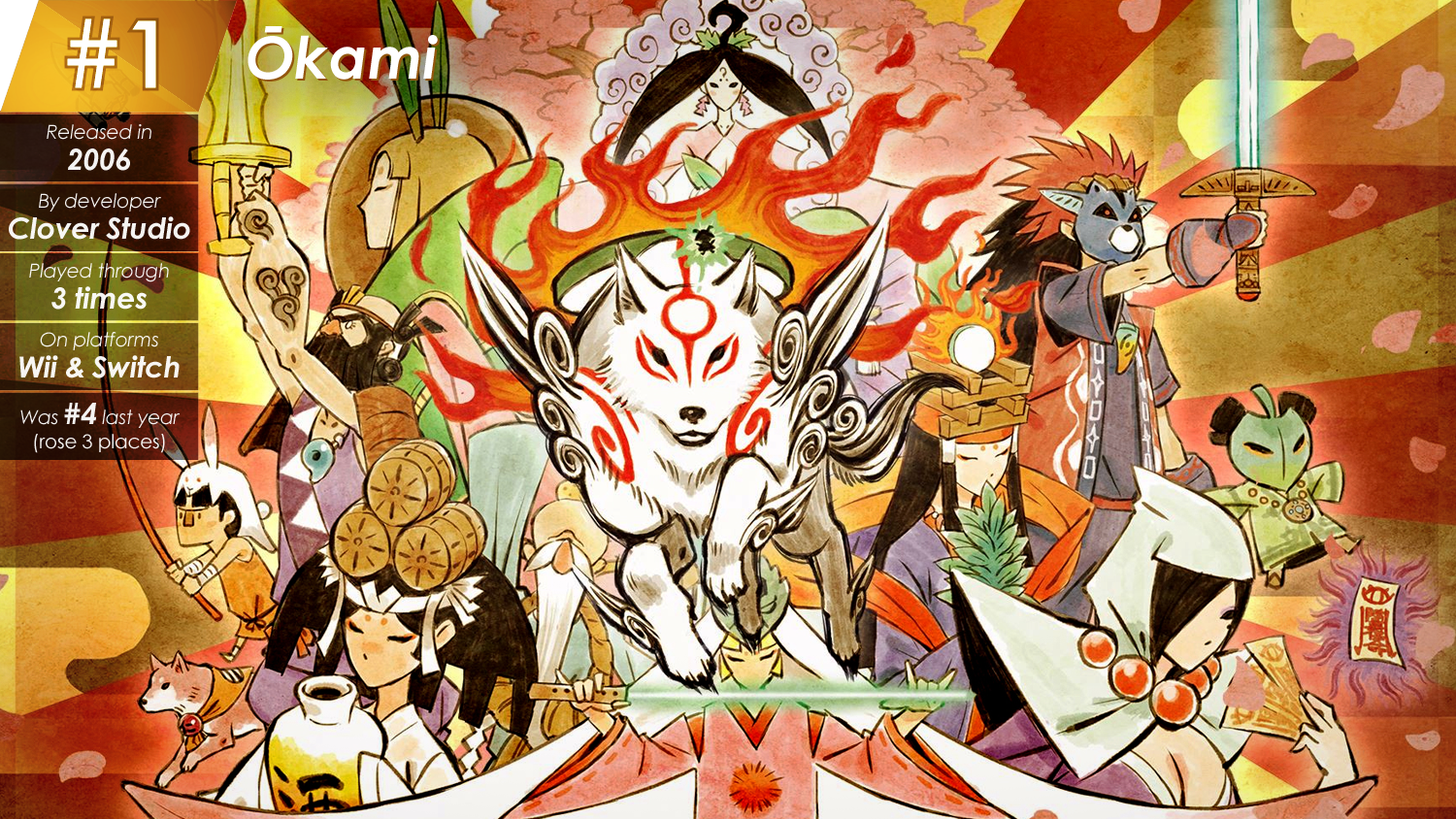 One year ago, there was a certain game aspiring for the #1 spot on my list. It didn't make it, because I eventually decided that whatever game would dethrone Skyward Sword had to earn it by withstanding the test of time and really showing it deserves to be called my favorite game ever. Breath of the Wild faltered along the way, but surprisingly, in their third year around, this wolf and her little friend made it. They spent a couple years at #4, which wasn't too bad, but a third playthrough of Ōkami this year saw them leapfrogging all the way to the top. The question is: why?

There could be many answers to that question (some of which might I might have talked about here). It has one of my favorite soundtracks in gaming, with a plethora of epic, exciting, peaceful and beautiful compositions that really sell the classic Japanese folklore vibe in the best way it can. It has some of the best combat ever in a Zelda-like game, with several mechanics that go way deeper than they look at first, and many amazing bosses (the final battle itself is my favorite in gaming, hands down). It has a large and beautiful world that feels as fitting for an epic adventure as it does for an interesting take on classic Japan, amplified further by its beautiful artstyle that also brings the whole folklore vibe together. It has the Celestial Brush, an awesome mechanic that's explored in all sorts of ways, creating loads of interesting and fun puzzles across the game. It has a story unlike any other, with jaw-dropping plot twists and amazing character development, made possible through some of the best writing this medium's ever seen, dancing so seamlessly on the line between laugh-out-loud comedy and heartbreaking drama you can't help but admire its charm.

On its own, there's no denying this game is near perfect - but the golden answer to that question is a very simple one: It has made me feel like I did about Skyward Sword. Beyond the vast array of similarities between these two games (at one point I was thinking of hinting both of them together, and had quickly come up with 6 or 7 hints that could be applied to both games), they are both the only two games that truly floored me emotionally. There's something very special about a work of art making you care and feel for its fictitious world and characters, and connecting with you on such a deep level that it can cause your eyes to sweat for a few moments... or in the case of Ōkami, more like causing the eyes to rain.

Beyond Skyward Sword, Ōkami is possibly the only game that has resonated with me on a level similar to a certain movie I love quite a bit, to the point where it now holds a similar position in gaming as that film does for its own industry - and that's the position of being something I can always turn to in a moment of sadness or frustration, knowing it'll make me feel better. Of course, being a very long game means I don't often just pick up and play it for a little while to feel better, but when I do, it's always a beautiful journey that makes me forget of all the bad out there in the world - which, considering how bleak this year has been for real life, is a quality I've come to appreciate that much more.

I can only hope 2019 will be the return of a more childlike time, where people care more about having fun and loving one another, and value the beautiful work of artists such as the people who created this little masterpiece called Ōkami. I wish you all, and myself, a happy new year.