I downloaded MM some days ago, and I have to say, I'm not so happy with the emulation quality. There's occasional sound stuttering (almost everytime you enter a new part of the town, but I've had hickups in the treasure fanfare, too). But what's worse, the framerate seems really low to me. Unfortunately I can't compare it to the original, since I lost my cartridge years ago... but I think it's not as fluid.

One technical question: The Wii is connected to my TV via Scart, so I can't use 480p output. But in the Wii settings, I can choose between 50Hz and 60Hz (afaik, newer TVs can display both modes). Does this setting make a difference, if the game is a PAL rom like MM? Would it run smoother if I connect the Wii via component cable (my TV doesn't have component input, though; just asking)?

And one question regarding the VC in general: Am I the only one who thinks VC feels laggy? I haven't played a lot of VC games, but now, with MM, the action definitely feels slow and somewhat delayed. 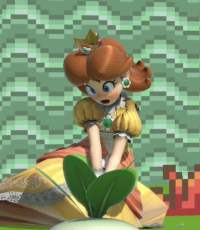 Running the game in 60Hz is going to increase the framerate from 25 to 30 FPS (in other cases from 50 to 60 FPS) if I remember correctly.

Using a component cable shouldn't improve the performance, though. It just increases the overall look not the framerate.

Edit: I've played Starfox 64, Mario Kart 64 and Paper Mario on my Wii so far and I've never noticed any drops in performance. I'm quite sure Majora's Mask ran at a higher framerate than its prequel, though.

I remember reading that MM had a worse framerate than OoT, because Nintendo improved the textures / draw distance / area size / enemy count a lot, at the cost of a higher framerate. That's why I'm not sure if the VC version runs worse than the cartridge, cause MM was a low framerate game anyway, if I am correct.

The lag thing is a different issue though... I've noticed it with SMW and Zelda II, too, and on other TV's as well. It's really annoying, imo. I wonder why no one else ever complains about this.

Well Ocarina of Time ran at 20-25fps if I remember correctly so I highly doubt Majora's Mask had a lower framerate. Remember they used the expansion pack for that game which doubled the N64's RAM.

I really never noticed any lags but I should've noticed them in a fast-paced game like Starfox.

The lag is entirely caused by your TV; the VC has zero lag on its own.  You must have an HD TV of some sort, and yes, these often lag, sometimes as much as a half second.  That's one of the reasons that I just don't get the HD craze, especially for a Wii owner, as the Wii plays faster and looks better on a tube-based television.

Anyhow, I've seen your problem before, with my sister and her husband's Samsung LCD.  It introduces an incredible amount of lag into anything it receives, which isn't as noticeable until you play an older game where the reaction time is so important.  Actually, I noticed it even on the Wii menu, as the pointer wasn't quite catching up to where I was directing it -- if your IR pointer lags behind your movements by even a fraction of a second, you've got a delay problem.

Different TVs do have solutions to this, but your mileage may vary.  Samsung models have an E.Mode button that you can press to cycle to Game Mode, where the lag will be lessened a good bit (although it won't be doing any signal processing, so you might end up with jagged edges as a tradeoff). Other brands have similar options.

If you look even for a minute online, you'll find that a lot of proud owners of new HD TVs have tried to hook up their old game systems (NES, SNES, whatever) and have found that they are virtually unplayable due to lag. I haven't noticed a thing so far and I have played the game for 10 hours already.

2) Framerate of MM on VC for PAL is ~22 fps. That seems low, but the speed is corrected on the VC, so there are no framedrops or lag. If you use component cables, the game feels smoothers than the N64 game (because the signal is digital instead of analogue).

4) Yes, there are some minor sound glitches in the VC release of MM, but it's so minor I can't believe you really notice it. The Collector's Edition of MM on GameCube was much worse, with constant sound loop errors and stuttering.

5) MM on VC runs at a better framerate than MM on the Collector's Edition.

6) MM on VC (so far) is entirely stable, no crashes or freezes, weheras the Collector's Edition had constant crashes and freezes.

All in all I'm very happy with Majora's Mask on the VC. It looks very sharp with component cables, and runs a little smoother too compared to the original. This is how Majora's Mask was supposed to be on the N64. It didn't age at all and I'm still impressed by the graphics and music.

@ warioswoods: My TV is a tube TV, no processing or converting... still I think VC lags a bit. Don't you think it could be VC's fault? I mean, it's an emulator, so there probably are additional "abstraction layers" that are causing latency. When I want to skip dialogue, I find myself pressing the buttons too early everytime. I'd swear that WW and TP feel more direct or responsive.

@ Chizum: Does the Wii switch to 50Hz automatically then, even if the system framerate is set to 60Hz? And speed is really corrected? Ok, maybe I really just got used to the newer Zelda games...
You said component cables make for a "smoother" feel - do you mean regarding the framerate, or the lag, or something else?

On the sound glitches: you are right, it's minimal. It's just that I don't like the feeling that something is not 100% original...

Ha, I'm probably sounding like quite the pedant :) Sorry for that, it's just annoying me that somehow something doesn't feel right. Thanks for your answers, everybody.

Hmm, on a tube TV there really is no lag from VC, so maybe it's just something in the game itself that you're not accustomed to. I've been playing a lot of early NES games, like Double Dragon, and I'm very sensitive to minute timing issues, so I'd notice if there was even a slight problem.

Now, Kirby's Adventure does slow down when there are too many enemies on the screen at once, but even then there hasn't been an input lag, just a general slowdown.

I see that mentioned SMW specifically, but I've been playing that one off and on as well and have been happy to see that there isn't any lag (I used to play that game on emulators and the slight lag drove me crazy). Out of curiosity, which controller have you been using, Classic or GC?

@ warioswoods: For MM, I am using a GC controller. I played Zelda II with the Wiimote, though, and I thought the lag was very noticeable - whereas Mario Galaxy or Mario Kart Wii were absolutely responsive.

Maybe I should ask the friend I bought my TV from, if there is some settings dialogue I missed.