what would gaming be with out nintendo?

Forums - Gaming Discussion - what would gaming be with out nintendo?

We would still have gaming, but it would be ever-relegated to a dwindling number of no-social-life technophiles, and the quality wouldn't be there at all.

and cartriges would of been a good thing. lok at cds dvds now blue ray. all these annoying long load times.

The only downsides of cartriiges was that they were

1) expensive to make and

2) limited in space (which now wouldn't be an issue) 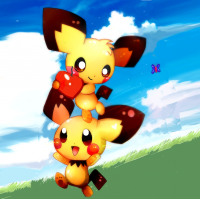 yeah, I wonder if we would all be PC gamers...

Sega and Playstation wouldn't exist. PC-gaming would probably be big

No Nintendo, no Sega, Playstation or Xbox. Sega and Sony entered the industry directly because of Nintendo, Xbox was made to stop Sony from becoming big enough to threaten Microsoft's pc-gaming, so they wanted to invade the console industry, and keep Sony small. So indirectly, Nintendo was the cause for MS to enter the business as well.

The right half of my body would still be working...stupid Pokemon seizure episode.

It's hard to say, PC gaming much bigger though...

I blame pika's thunder bolt for that...