It seemed like AC Unity was barely possible on the consoles they made it for. It ran like trash, had jarring pop in and the gameplay was basically the same.

The large crowds were neat, I assume not possible on last gen, but had no real significance to gameplay. I say this as someone who completed both games you mentioned.

I am simply suggesting Ubisoft could have made a version of AC Unity on 7th gen and capture the core gameplay just fine. The large crowds were really aesthetic.

AC Unity was actually a smaller scale game than previous entries. They put more detail inside buildings, but created a smaller world.

I was referring to hardware enhanced vs patch enhanced games.
Some backward compatible games can have noticeable benefits even without a patch on both the Xbox one & Xbox one X:


Patched enhanced games get much more improvement:
For example Forza 4: 4k, HDR, 30/60FPS; An option for enhanced visuals at 30 FPS or 60 FPS

It's true that AC Unity wasn't great, had a lot of technical problems and the crowds didn't add much to the game. But that still doesn't change the fact that they chose to make two different games in order to support ps3/360 and make the full next gen leap to ps4/Xone with Unity. And like I said, why do you think there isn't going to be a Cyberpunk port for the Switch, when they did port the Witcher 3?

You can't be serious, PS4 and Xbox One CPU's could barely handle these huge crowds with drops to 15 fps and you expected PS3 version?

Please just stop, some games are just not possible on older consoles without drastically changing the game.

I don't know where you guys are getting your information but game development is done on X86 infrastructure and are initially built on some of the best high end PC with top of the line specs. The developers then scale back some of the graphic and cap performance in order to have the game run on console specs and maximize what can be achieve with the console hardware limitation. The game built from the grounds up for a specific consoles can benefit from some minor improvement because the console limitation were always considered during development but there a limit on how much you can push the hardware. Just like Microsoft "secret sauce" never really pan out on the OG Xbox. At the end of day you limited by GPU, CPU and Rams.

Well there many scenario that I can think of why it's wrong to force someone to move to next gen:

1. Imagine someone just upgrade to PS4 Pro or Xbox One X, they just made an investment and don't want to purchase a new console right away.
2. You could simply can't afford to make the switch and will be left out. You could not have the money or be younger and parent won't purchase a new console.
3. What if all you have in your house is a bunch of 1080P TV and you don't have any TV or Screen that can take advantage of the next gen consoles.
4. Microsoft is talking about forward compatible games VS Sony's Cross Gen play. If you were to buy Halo on Microsoft consoles, you now own it on all the consoles Vs Sony's Cross gen play that will allow PS4 and PS5 to play online together. But, lets say you bought Last of Us 2 on PS4, you would have to purchase the PS5 version when Sony release the new consoles. (Lot's of rumors so let's just hope that Sony is forced to match Microsoft forward compatible)

At the end of the day it's better to simply have more option, it's also better to wait a few years before committing to a new consoles, you will get more exclusives & can expect price drop on older games and new consoles.  Microsoft solution is actually very consumer friendly. Microsoft unlike Sony as a huge presence on PC, launch their Xcloud service and benefit from subscription service like Xbox live and Gamepass. They benefits regardless where you play. Sony on the other made huge financial investment on the PS5 and doesn't have all of the other source of revenues like Microsoft. During transition consumers will stop or have less incentive to buying games and console for PS4 because they know that there better version on PS5 and because of the smaller PS5 install base, it's harder to recoup the invest made to make PS5 exclusive. Slow transition for Sony would be very bad, they lost Billions of dollar on the start of PS3 and they surely don't want history to repeat itself. Unfortunately for Sony the competition is stronger this time around and doesn't play by their rules.

I agree that it sucks if you just bought a XB1X or ps4 pro, but nobody can force anyone to buy a next gen console. If you can't afford it, then just wait a few years till the prices drop. But there are plenty of people who can't wait to give MS or Sony their money and buy a next gen console to play next gen games. And no, next gen games don't mean the exact same games we are playing now but just in a higher resolution and fps. I want to see more complex level design, better ai, physics and a boost in overall graphical fidelity with shiny raytracing on top. With current gen they couldn't really deliver on their promise because of the crappy jaguar cpu, but the specs of these next gen consoles are pretty damn impressive. Not saying this will be possible on next gen consoles but it sure as hell will not, if it had to run on 10 year old consoles as well.

Sony's appoach is no different to MS's when you think about it.

Santa Monica, Naughty Dog, Sucker Punch etc all won't have games ready for PS5 until years after launch (Aside from there ports) Same with MS, once all there 1st batch of games come out from there internal studios, it will take atleast 2 years for there 2nd batch of games to release and thats when the Series X is built in mind. Same goes for Sony's studios who recently had games released.

At the end of the day PS4 and PS5 are using X86 infrastructure to make game. There are so many people on the thread that believe all of Sony PS5 exclusive could not be ported to Ps4/PS4 Pro. I believe that to be false, beside you probably won't see true next exclusive for a few years. Sony keep touting an unannounced feature, remains to be seen how game changing that features is going to be!

Well I doubt you will see much of it for launch title. I can't wait to see if what they did with Halo infinite, they have a lot to prove since it's coming from the same studio that gave us the mediocre Halo 5 single player. How much does Complex Ai and level Design come from hardware improvement vs Development team getting better at their craft? Probably a mix of both.

Take the tech demo you just shown and scale back the effect, graphic and performance.... and both demo could run on a PS4 & Xbox one.

I’m not fully onboard with this myself. The extremely underpowered CPUs in last-gen consoles can have ramifications on design. More importantly, games that did appear on 360 and XO required separate teams with their own budgets. Titanfall 360 was a huge undertaking, for instance 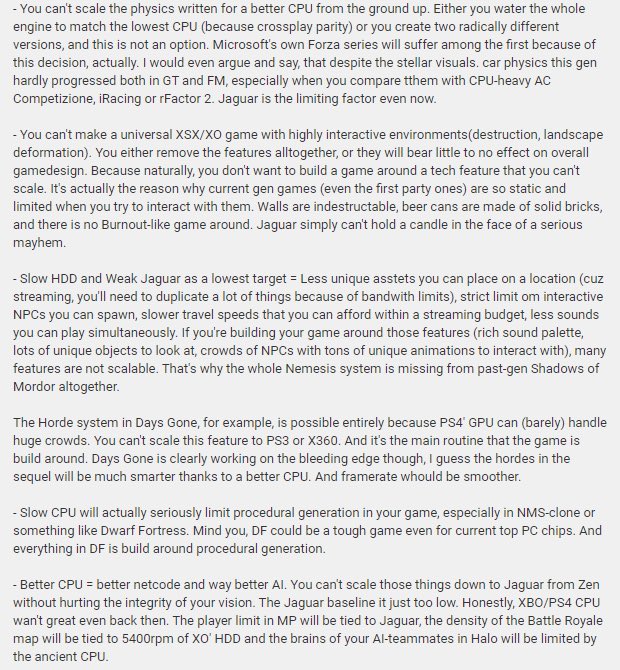 John Lineman from Digital Foundry has spoken about how future games "design "  will be held back, hampered and limit by current gen tech if games design for cross gen.

I’m not fully onboard with this myself. The extremely underpowered CPUs in last-gen consoles can have ramifications on design. More importantly, games that did appear on 360 and XO required separate teams with their own budgets. Titanfall 360 was a huge undertaking, for instance

What MS is proposing here is removed from that - the game would need to be fully scalable and that means certain design decisions will need to be made that take older HW into account. There won’t necessarily be a separate port studio doing it this time.

Yes. It was likely more difficult. Yet, in this case, last-gen CPUs are so slow that they can have a huge impact on certain design decisions. Freeing developers of the Jaguar cores is a good thing but it will depend on the type of game.

Many games from last gen already prove this, many games came as cross gen games look bad event on PC and PS4/Xbox One thanks to old hardware limit the potential.

Battlefield 4 was design using PC not PS3 nor Xbox 360. If games were design using Xbox One then Xbox series X will just look plain ugly with just better resolution and better frame rates . If games are designed using Xbox series X and then  scaling down will probably  better instead using Xbox One as standard.  But still some aspect on Xbox Series X will still be held down due to parity on game design across  Xbox platform.

That's why New 3DS games has games has that cannot playable on old 3DS hardware , or perhaps PC has certain minimum requirement on it, because the games was build upun new foundation and new hardware. You can scale down games but you cannot scale up game design based on low spec machine.