Don't forget everyone in VGC are better managers than big 3 CEOs and directors. I have no idea how they never leave entry level positions in their companies =p

I still don't understand why you wouldn't include Halo Reach into the debate. Just because the story is a spin off doesn't mean its not a mainline Halo game. Reach is still a Halo game regardless what the story is about. ODST is an expansion to Halo 3 but again I have no issue brining it up. Reach capitalised on sales the same 4 did and both went on to sell 10m each one after the other. Remasters and RTS games are not meant to outsell the core games, that's a given in most series.

The point is Halo is a huge juggernaut of an IP worth billions and is up there with some of the biggest games in the industry. Reach is included into this debate because its a serious Halo game that was built from the ground up with its own identity which offered a traditional Halo campaign and Multiplayer mode. Not a RTS or Mobile Halo game.. its meant to be a traditional Halo game and that's what sells the franchise.

The graph you linked shows the typical up and down pattern which majority of franchises have. I don't see a decline in the sense you are seeing. I see that Halo 5 is its downer this gen and based off the record the next big Halo game is set to raise the needle. Same way ODST was the downer and Reach was the Upper etc. Reach and 4 outsold Halo 1 and 2. That's not bad at all considering those games came out after Halo 3.

In all fairness too, as the graph grows, so does Digital sales which I wouldn't think have included Digital sales. Halo 5 could be sitting on around 6m to 7m which is similar to Halo 1 and close to Halo 2.

As long as they don't block or refuse indie games I'm good with them focusing on AAA first party games. To me a good platform contains a mix of different genres.

I have given multiple reasons why Halo: Reach, ODST, Halo Wars, Spartan Assault, Spartan Strike, Halo Wars 2, Master Chief Collection and so on shouldn't be included as they aren't part of the two canonical trilogies, they all sit outside of them.

I suggest you go back and re-read my posts as my answers haven't changed on this front.

Halo as a franchise is one of the biggest franchises in media in general, not just video games.

Reach doesn't get included unless you include every other title... And even with Reach's inclusion, the general sales decline from the height of Halo 3 doesn't actually change... Did you not see the pretty graphics graph I made?

There are heights in the graph, but each height is smaller than the last. - That is a decline.

I don't think I can represent it any better than a graphical graph for you to understand at this point, so if you are unable to understand it, we should probably move on.

Also... Yes, Reach outsold Halo 1 and 2.... But you strongly used the argument that the Xbox 360 had more hardware on the market than the Xbox One, hence Halo 5's lower sales... I assume that same argument of yours is no longer applicable now that we are talking about the Original Xbox and Halo 1/2? ;)

And ultimately still changes nothing.

Ugh it does and can change everything. Infinite might not sell asmuch as Halo 5 due to a digital future and Game Pass. Does it make it a decline even if it rakes in record profits much like Halo 5 did? I can make a graph showing how much money Halo makes which is more important than physicsl sales, as sales dont tell the true story here. Also the pretty graph you made is correct as they show a decline over the years, but lets not ignore as digital gets bigger yearly so a physical decline is expected.

And to prove my point is that modern Halo games have outsold the previous Halo games on average (yes except 1 in Halo 3) Reach and 4 eclipsed 1 and 2. Halo 5 failed i agree but that doesnt mean the franchise is in decline. Its 1 game.

I am amazed so many people are willing to jump on Halo over 1 underperforming game (which probably sits on 6m to 7m possibly higher than Halo 1 and 2. X1 is not a creditable platform. It has alot of bad press which would have affected sales. OG Xbox and 360 were consoles that were praised by the critics and gamers. Alot easier to sell to the public.

A better question would be how many Halo 5 games would have sold on the PS4?

Is your argument going to say Mario 3D World put Mario in Decline because that game umdersold on a platform in a similar situation to the X1 when it comes to reputation? No. 1 decline doesnt put the entire franchise in decline plus it takes 1 game to put it back on the map as we have seen with Mario Odyessey, Zelda BOTW, God of War etc.

No. It changes nothing. There is still a decline in total sales even if we account for digital sales like you alluded to prior.

As for actual profits... That is an entirely different argument, not once have I stated that Halo as a franchise is not raking in profits, don't shift the goal posts.

Again, the graphical graph represents a decline in sales. The fact you are trying to argue against mathematical facts and figures is pretty interesting.

I have added a green line to as better represent the overall decline. 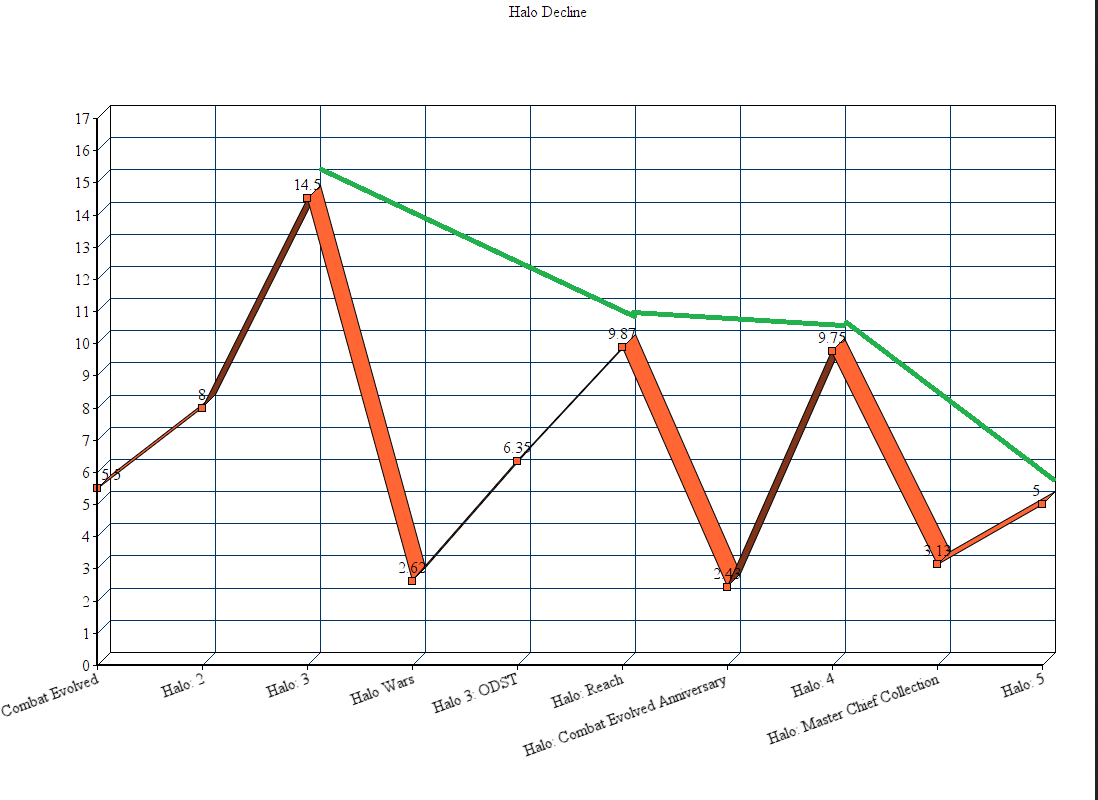 As we can see... We peaked with Halo 3, declined to Halo: Reach, declined again to Halo 4 (Albeit slightly), declined significantly to Halo 5. The trend is that there is an overall decline... The evidence is literally here, you can't deny it at this point... Unless you are being disingenuous.

Those smell like baseless assertions... And assertions can be discarded until you can substantiate that with evidence like I have done.

...The Original Xbox also sold less consoles than the Xbox One... It's Microsofts worst selling console. - Have you forgotten that when you looked at Halo 2's sold numbers?

I don't care about the Playstation 4. Don't mistake me for a console gamer.

I don't care about Mario 3D World. Don't mistake me for a console gamer, our discussion is currently with Halo, stop delving into logical fallacies.

The decline in the Halo franchise... Again... Look at the graph is more than 1 game.

And you are right, it only takes 1 game to put the franchise back on track... Which is why more than once I have openly stated that Halo: Infinite needs to be judged on it's own individual merits.

Okay so than we can safely agree on and say Halo is in decline on the physical sales front only but not as an IP since current Halo is making more money than it even has before? That's basically my point. The IP is not in decline much like many would like to believe however physical sales is in decline ironically since we move closer and closer to a heavy digital future. But lets ignore the millions of digital sales here and just count physical charts.

Also just to add, physical sales does not determine a IP decline. Halo as an IP has most likely grown bigger and bigger through the years. Don't be surprised if Halo Infinite sells less copies to Halo 5 but break a Halo profit record next gen. Because like this gen pushed digital sales heavily, next gen will be pushing not only digital sales, but game services (Game Pass) and Streaming services (xCloud)

The data is undeniable at this point that sales as they are tracked currently (Which may/may not include digital) and are thus represented in the data points provided are certainly in the decline.

Even if we were to assume that Halo 5 had a 50/40 split of Physical/Digital sales, it's still going to come up short... Plus we don't actually know if the tracking encompasses digital or not in any of the data tracking already.

The games themselves with the data we have currently have been on a sales decline.
Digital tracking is another kettle fish entirely...

But adjusting for inflation that would be the equivalent of $370.54 million for Halo 3... So not that much of a step up.
But where Halo 5 has an advantage is the amount of cash Microsoft has managed to spin via microtransactions, which muddies the profits water.

Either way, Halo 5's multiplayer population hasn't been retained... And Halo: Infinite's success is unlikely to be based on any of the other games prior sales precedents, thus it may outsell Halo 5 by a massive margin, especially as it gets a PC, Xbox One and Scarlett release... Provided it reviews well, Halo 5 had some detractions afterall.