I don't understand your point of objection, particularly to the second item that you bolded that I didn't in the original post:

First of all, notice that I used the qualifying term "virtually" before the part you bolded.

Secondly, even if you missed my inclusion of that term, why would you be offended even then? It's been my understanding that you consider yourself to be male anyway. Or has this changed recently?

The rest stands. I maintain my title of Leading Prude Feminazi Killjoy.

Oh, I'm sorry I didn't notice the qualifier. I thought I had mentioned to you that the male gender in my profile was wrong. Must've mentioned it to someone else.

Don't mind me then go off boo boo.

If anyone wondered, Biden is still Biden and his own worst enemy:

Saagar on Biden's interaction with the Iowan who asked him about Hunter Biden.

Is it just me or this absolute nightmare of a map seems more likely this election cycle than any other before?

Given state trends in the last 20 years or so, this is potentially feasible even with a D+5 win (provided they underperform in Arizona). 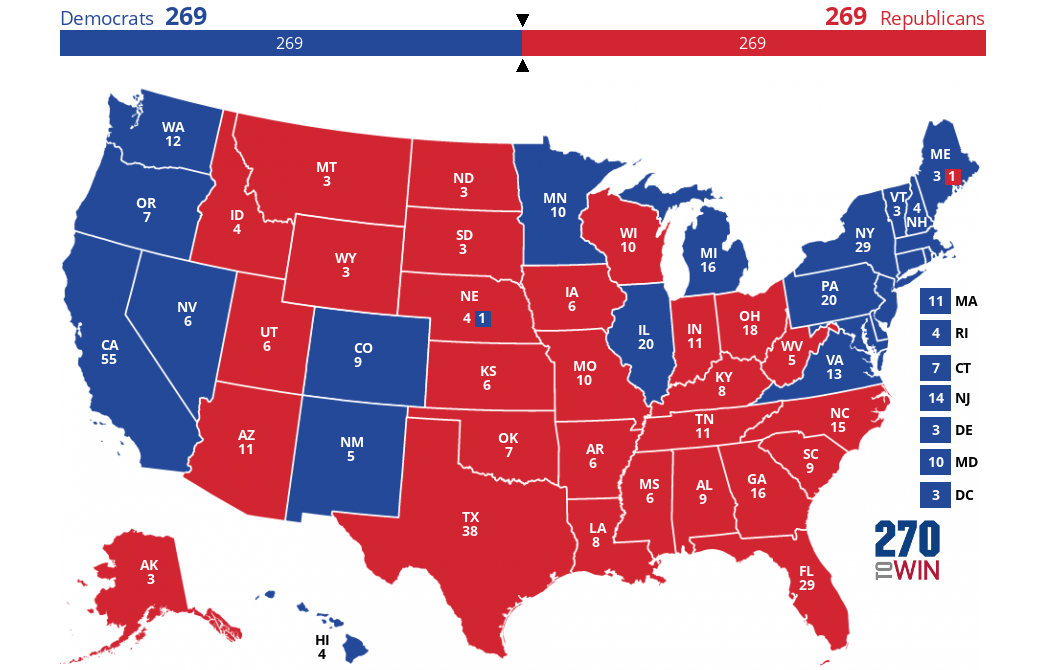 I don't think you should be banned, I probably overreacted, but even that post was directed at 2 or 3 people here (like the other 2 I quoted there). The ones who simply swoop in and drop the "Russian or Republican traitor" slander bs while offering nothing to back it up and little more elsewhere - stuff that's simply meant to provoke while providing nothing else of substance. You've definitely offered plenty of insight, some of it great. I just thought it was something to consider (at least good for a warning perhaps), especially since someone got banned for dropping a statistic (which actually DOES seem to have some merit), and again, I did not mean you.

I dunno.. I guess I just need to realize this is a DEMOCRAT political thread and the Russian conspiracy theory thing is just an integral thing that's part and parcel to the modern day ideals/platform of the party, regardless of how asinine I think it is. So naturally, this topic is going to have a ton of "so-and-so is totally a Russian, maaaan!" for devout followers OF that party.. That same way a Republican thread might get a lot of "so-and-so is clearly a dirty commie/terrorist/satanist maaaan!" I just, coming from a liberal/libertarian largely OUTSIDE the realm of the Democrats find these notions absolutely absurd with zero basis but that's just me I guess.. I do feel if you're going to throw those smears and wild accusations (along with the so-and-so is a secret Republican), at least back them up with some insight as to WHY you have this suspicion. Which you've at least made an attempt to do somewhat. I still think it's completely asinine but at least you went beyond just the drive-by smears.

Regarding the other point - I was merely pointing out the hypocrisy in defaulting to "other female candidates being criticized more seemingly because they're female" yet apparently this accusation doesn't apply to Tulsi.

Last edited by DarthMetalliCube - on 06 December 2019

This is the kind of gross behavior that you'd expect from 45. Making fun of someone, body shaming them and yelling at them condescendingly. It was a legitimate concern brought up by a reasonable voter. How does he continue to get away with this shit??

I honestly cannot believe this man is the Democrat frontrunner.. Even Trump, for his childish, immature ways and bloated egotism knew not to shit on his own potential voters! Lol

The random guy was asking a legitimate question of a very real concern and THIS is how he responds? How the hell would he go up against Trump?

easy, he'd lose. Same goes for Pete and every other centrist and that one candidate who isn't picking a lane because they want to pretend to be progressive.