But manufacturing output has risen fairly regularly in the US. It had a drop off (with a lot of other places) at the time of the ~2008 economic collapse, but it's been growing since then.

Free trade has significantly benefitted the US economy, as it's largely US corporations that exploit third world economies. American corporations often backed with the military, which has pushed countries to have certain policies. If the US isn't properly spending this money to benefit the people of its country, that's an issue with neoliberalism and the significant weakening of the tax foundation in the US, and as a result of the social programs, they funded as established by the US New Deal government. The destruction of the labour movement has also significantly hurt the working class. But even still, fixing the labour movement won't be beneficial for the US economy going forward as technology (automation and AI) is changing things rapidly.

I am not defending free trade. On the contrary, I am heavily in favour of trade unions that will block corporations from abusing their power or dealing with other business entities that do. What I am saying is the US has benefitted tremendously from free trade. Without it, it's not as though the areas doing poorly would be doing any better if the economic management is still poor. After all, the US manufacturing output is still growing in volume, as is the GDP. The problem with neo-liberal governments are not that economies don't work, it's that they tend to work for specific classes and not others. This holds true for both free trade and non-free trade.

Slight correction here, the UK Gov pulled the bill due to a combination of the amendments some MPs had put forward being unpalatable for the Gov and that they didn't want parliament to scrutinize the withdrawal bill (one of the amendments extended the amount of time MPs had to review it). This was after they tried to rapidly pass the bill through the Commons in a few days.

Boris is basically saying he doesn't want parliament to pick-out all the holes in his legislation so he pulled it instead.

I probably exaggerated the state of "decimated" cities but there certainly are cities like Detroit, Cleveland, parts of Cinci, Chicago, etc that have become somewhat dilapidated and largely abandoned by industry moving out. There are a lot of very poor towns in the U.S. that are in a constant state of economic depression even in the best of times. I live in one of them. It's not Midwestern, but there are many rural areas that very, very poor in this country, often because a mine or a factory that used to provide the livelihood of the whole community is now gone. I get what DMC is saying and think people shouldn't trivialize too much. It's also more than fair for DMC to suggest that most of the trade deals we have struck in recent decades have resulted in trade deficits for the U.S. There are plenty of communities in the UK that are under similar circumstances. These are realities.

These things said, there is a reason why no Democrat running for president this year is using the word "tariffs" in anything other than a negative light, including the fair trade Democrats like Elizabeth Warren and Bernie Sanders. All you have to do to see why is look at both the economic results of the current administration's ridiculous trade wars, as well as the polling on it, both of which are very negative, ESPECIALLY in the Midwestern states!

The Trump Administration's ambition is to negotiate new trading agreements with a host of other countries that are more favorable mostly to the American capitalist class (as in you will notice the absence of new labor protections in the deals being negotiated, for example) and the White House contends that aggressive measures that include unilaterally disregarding existing trade deals and imposing protective tariffs on imported goods of all sorts are tactics necessary to bring countries and blocks ranging from China to Mexico to the EU and South Korea and everyone else on Earth apparently to the bargaining table and cause them to make concessions. The reality of the matter though is that the disruptive effect of that process is nightmarish for American manufacturing, which is why the fair trade Democrats insist on renegotiating many of our existing trade deals in way that's multilateral rather than unilateral. That avoids the existing economic disruptions that are frankly starting the tank the economy. And the fair trade Democrats insist that new labor and environmental protections should be added to future trade agreements with other countries, unlike the current administration.

The same basic principles apply to Brexit. Unilaterally withdrawing from the EU is just factually a catastrophic prospect for the UK that will likely hurt the poorer parts of the country the very worst. The economic ramifications of a no-deal Brexit would be many times worse for the UK than of the current trade wars the U.S. is fighting in this country have been.

Election in the UK today, which will strongly influence Brexit. If the Tories won't be able to secure a majority, they probably won't be able to push through Johnson's Brexit deal. The Brexit partiy and UKIP are practically dead by now in the latest polls (around 3%), so they'll have only the DUP as real allies - unless the LibDems support Johnson. 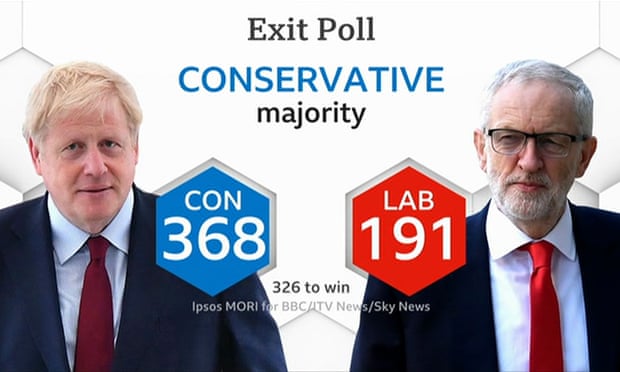 BORIS Johnson is on course for a massive election majority tonight after the exit polls tipped the Tories to win with 368 seats. Jeremy Corbyn looks to deliver the worst Labour performance since the Second World War with a projected 191 seats.

At the same time, the SNP has increased massively to 55 constituencies, meaning they can't be denied an independence poll if the numbers stay true. This might spell the end of the UK as we know it if the scots would vote to leave the union with England.

How can anyone claim that Brexit is not the will of the people? Or are we going to blame Russia here too?

Well, with Labour going with their own Brexit while Corbyn made himself more unelectable and Jo Swindon making herself more and more unbearable, there was really nobody anymore to vote for if you wanted to remain unless you were in Scotland or Northern Ireland (Okay, the greens, but those don't get enough votes to turn an election all by themselves. They're a very small party in the UK, after all).

As such, I was expecting a big win for the Tories, though not quite as big as the exit poll suggested. What I wait to see is the results in northern Ireland. I expect either Alliance or Sinn Fein to win and the DUP to drop deep down there.