Well, there's nothing wrong with liking the character and her design, as well as doing fan art, as long as it's not... weird mature stuff...

In the first Shantae game, but I don't know if she's an adult now or not.

They're only sexy outfits if you sexualize them.

I thought they were already sexualized. Look at her dancer outfit introduced in Risky's Revenge: 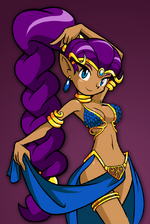 Well, I mean, you're treating a drawing as if it were an actual human being.  If you're going to do that then you have to go all the way, not just whenever you feel like it.  If she was 16 in the first game then she would be in her twenties now.

Though, I do wonder how this "real world laws apply to video game characters" thing goes.  How many times have you committed murder, for instance?

I thought she was thousands of years old Because genies are ancient. This is like the thousand year-old loli vampire/dragon/goddess thing, lol

It's just a cartoon character, those don't have an age. If you like her, that's fine and you don't have to feel bad about it. Doesn't make you a pedophile. I like Sailor Moon a whole lot and that girl is only 14 years old in the story! And yes, those long legs with that extemely short skirt are kinda hot, not gonna lie. =P

She is consistently around the age of sixteen in every game that she has been in. She essentially still lives with her uncle Mimic, whom she at times, goes to for guidance. I don't really expect people to know this, even if they are invested into the series. Its not even important.

I can guess that reason it has been happening recently is due to Smash bros. anti-campaigning. Across social media, but especially on twitter, fans who wanted other characters had been aggressively inclined to call Shantae fans pedophiles for wanting her in the game. This gradually became a trend, and the same language used in the ban notes of deviant artists was incredibly derivative of what was said in those social media discussions. The bans, if I remember correctly, started around October. The reports were sometimes deserved, but many were obscure, random and obvious. Many depicted her normally and not suggestively. Sometimes the ones that were not suggestive were by an artist that actually had content that was suggestive that would obviously go by the same bans. By my guess, it seems that someone was searching Shantae up and banning the ones the just happened to see. Matt Bozon, the creator, even stepped in on one occasion, but I don't know what were the results. I don't actually have an account on the platform, so I just observe things on the sight like this.

In terms of Shantae as a character herself, I'm not really a fan of some design choices, despite being an avid fan of the franchise since I was a kid. There is a lot of context for what she wears and does, though I think it sometimes veers the line. Though I never sexualized her, I can understand some people's concerns. I would just say that you should really try to focus on other parts of the series such as the gameplay, music, humor and aesthetics. Not the assthetics. The franchise has a lot to offer, and I think how she may appear at times should not play a role on that positively or negatively