I enjoyed it myself as well and am disappointed that it doesn't seem to be given a chance.  Ron Howard did a respectable salvage job and the cast generally delivered.  Not perfect, and could definitely have been improved with another pass at the script to strengthen the Kessel heist and provide for more connections to Han's attitude in A New Hope, but fun enough.

Imagine if the movie actually was bad?

I'm gonna give it a chance whenever is available online.  But if we want KK to go then we cannot support her movies.  Because then people are just gonna say: "Oh! but look how much money Solo did! She is doing a good job!"

You know, like some people here are already saying that she should stay just because TLJ did 1.3B. So no, I will not give my money to anything that has her name on it.

EDIT:  Well, That and the fact that I just dont trust them anymore to make good movies.

And lets be honest, the reviews so far have been split.  So there is absolutely no guarantee that I might end up liking the movie.

I think Kathleen Kennedy needs to tighten her ship because the LucasFilm and the franchise aren't being managed as well as they should be, but I'm not in the mode where I want her to be fired.  Certainly not of mind that I'd skip out on a movie I have interest in just to spite her.  I'm far from persuaded that the next guy will be any better.  I don't think any of the movies on her watch have been bad, just unambitious outside of TLJ.

Obviously, Solo not doing well is on her:  The concept no one asked for.  Hiring the wrong directors and causing the budget to explode with reshoots.  Stubbornly sticking with the summer release only six months after the last movie despite the winter release schedule proving successful and having to rush the movie through post-production.  Marketing being meh.

All of those problems fall into her lap.  And it's not unique:

The only movie that went off without any significant issue was TLJ.  Some of that is normal in Hollywood.  A writer being replaced is really no big deal and sometimes a project just can't be made to work.  But that's a lot of directors leaving in less than ideal circumstances either during or shortly before production.  Though in the case of Rogue One, the climax was easily the best part of the movie, and by all accounts Solo was shaping up to be a disaster before Ron Howard walked in and employed his professionalism to the project.

I think the first mistake made was in bringing in JJ Abrams.  The guy is fine at finding the flavor of something and the illusion of depth, but really he's always been as deep as a puddle.  Because of that, the other movies have suffered by not having a solid sense of direction.

That, to me, is more in line with Kennedy's issues.  But I don't want her fired, she really is a solid producer.  Say what you will, she's at least good enough to clean up her own mess twice in four movies with Rogue One and Solo.  Something exceedingly difficult to accomplish once production has started.  What I'd like is for them to sit down and think of an overall plan, because it feels like they're taking everything one movie at a time and it's not gelling as well as it should.

Saw this on reddit earlier, thought it was hilarious 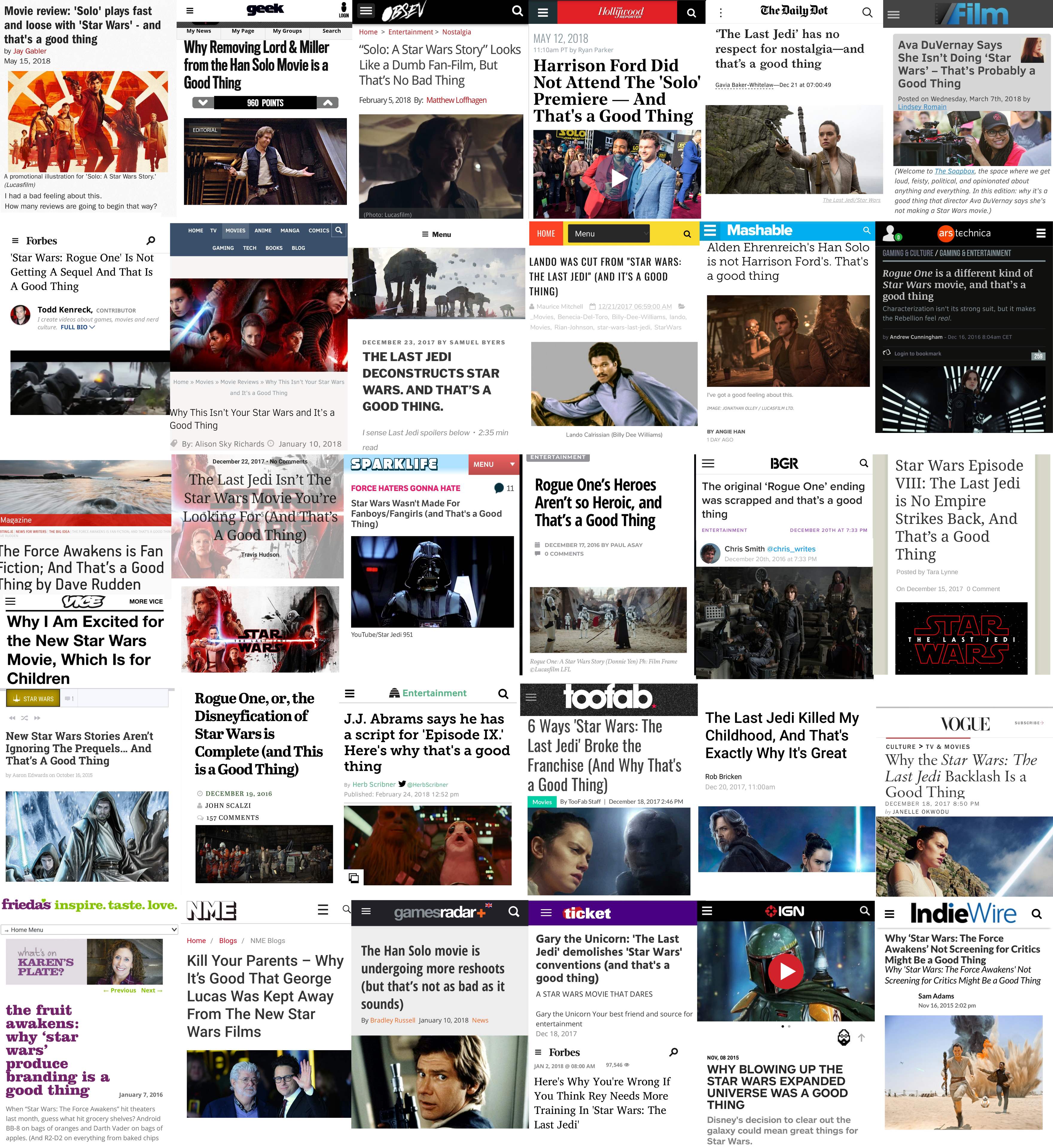 Seriously, they should go easy on the language elements given to them by Disney. It becomes ridiculous when it's that obvious. But I guess you have to be a real journalist if you want to write a real article...

People laugh at conspiracy theorists who talk of these corporate and media agendas, then you find out about stuff like this with everyone mysteriously coming out with articles around the same time that all sound roughly the same, and people still wonder where the theories come from lol.. Media is becoming far too obvious these days, they're totally showing their hand.

I love how defensive and damage control-esque these all sound, doesn't bode well for your product. Like, if the product is strong enough, it'll speak for itself, doesn't need media drones to come rushing to their defense to explain their case and try to convince fans.

There is no conspiracy behind it though, it's just "language elements". Disney, like other companies or even government, send to journalists suggestions for expressions and vocabulary in their articles. But since "journalists" nowadays are entirely incompetent, useless and undeserving of this name, they just copy the language elements like nice little sheep and are unable to think or analyze further.

Technically, that is a conspiracy. Studios should not be suggesting what these "journalists" write. They're supposed to be independent from Hollywood and give their actual opinion. Not be spoon fed stories by Hollywood to try to cover up controversy or poor films. It's just becoming more obvious today that most of the media has no teeth. Well, unless what they're covering is even on the slightest right of center.

Please go see the movie and stop commenting on what you think it is until you do so.