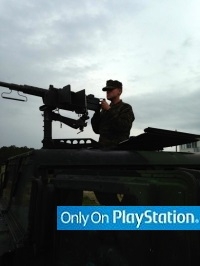 Even if Game Pass wasn’t a factor, SoT would not sell well. I don’t care what random mundane stats MS and Rare try to bring; SoT is simply not something that will appeal to the vast majority of Xbox users. Not saying it’ll be a bad game, but look at games like Quantum Break and Sunset Overdrive; games that had potential to be high sellers, but fell pretty flat, given the hype that was placed behind them, and recieving fairly decent reviews. I’m thinking 2 - 3 million LT for SoT, and that’s being fairly generous

if God of War launches to the same critical acclaim that is standard to the franchise, it will sell 5 million + this year alone. 1. State of Decay 2 releases on May 22nd, so it's not the only game this spring.

2. Both will be available day one on Game Pass.

Because of this, I think God of War will sell more physical copies (the ones we'll be able to keep track of). That being said,  M$ is going to make a pretty penny even before Crackdown 3 releases.

Dad of War, easily. Not even close.

I have a feeling these threads' sole reason for existence is the slight chance that the improbable might happen and to serve massive crow to overconfident people who just naturally picked the most probable answer.

That said, easy win for Sea of Thieves.

I’m buying Sea of Thieves and I’ve never cared for God of War, but I’m not going to assume GoW won’t sell more physical copies. But if SoT takes off, it can sell millions digitally. They’re totally diffferent games aimed at different customers. Let’s not forget the SoT beta generated a lot of attention on Twitch/Mixer, so it does have potential.


Tough call, but Im thinking God of War comes out on top.

I think some are putting to much hope on multiplayer. This is not even a contest. GOW should have a landslide victory.