*SPOILER WARNING*
I’m discussing elements that could be seen as spoilers for people who have completed some of these games but not others.

They are connected in that they are different takes on the same story arc. They have different licences and inconsistencies between them, but removing the inconsistencies, Xenosaga, Xenoblade Chronicles X, and Xenogears fit together very well due to having a lot of common history. Basically - taking the common bits:

1. Xenoblade Chronicles X - humans leave earth and earth is destroyed.
2. Xenoblade Chronicles X - Fleet of immigrants begins traveling throuch space and colonizing planets.
3. Xenosaga - Humankind creates a galactic wide Empire.
4. Xenosaga - Zohar rediscovered and made into a superweapon by harnessing the power of a higher dimensional being in our third dimension. Kind of a zero point energy generator because relative to us, higher dimensions have infinite energy.
5. Xenogears - Abel makes contact with the Zohar, gains power of the higher dimensional being.
6. Xenogears - weapon creates human life forms to act as the genetic material to rebuild the body of the weapon.
7. Xenogears - 10,000 years of history, humans destroyed multiple times because the genetic material is not pure enough to contamination from the genetics of actual human descendants.
8. Xenogears - Scientists discover a way to use nanotechnology to build replacement flesh for the weapon - which they now refer to as “God” because the energy source is the source of energy and Ether magic on the planet (yes, it is similar to two other Takahashi games - the three Goddesses from FF6 and Lavos from Chrono Trigger).
9. Xenogears - the weapon is built from the flesh of the descendants of the created humans, “angels” are born as the defensive force of God.
10. Xenogears - “God” is killed, and the the higher dimensional being goes home.

There are inconsistencies though:
1. Xenogears and Xenoblade Chronicles X have aliens, Xenosaga does not - it’s more of an Asimovian universe.
2. In Xenogears, Abel is merely a survivor onboard an arc colony ship with millions of others, in Xenosaga - he is a bio weapon, and the arc ship is a battleship to host Abel - not a colony ship.

I think Xenoblade Chronicles X and Xenogears could potentially be the same universe, since neither has an element that contradicts the other... yet. BUT! To me it looks like Xenoblade Chronicles X is Xenogears Episode 1 - the human Galactic Empire. The initial New LA colony is not inconsistent with how the first civilization of Xenogears began - it has Kadamony, it is only missing the Zohar

Xenoblade Chronicles - it has the same macro-plot as Xenogears. If you take Shulk’s story, it is basically the beginning and end of Fei’s story, same with Elly and 7’s story, also Bionis and Deus. Egill and Krelian are the same archetype, the tragic villain who is misguided due to an ancient disaster that ruined his life.

Xenoblade Chronicles doesn’t establish anything new, it only repeats part of a plot line in a different setting. The purpose of the game was an experimental sort of project to define what Takahashi’s games are going to be like going forward (big areas, battle system, high vertical traveling - and it was very successful at that. So I don’t think any unification story would include this game in any serious capacity.

In short - I think Xenoblade Chronicles X - if continued - could be the series that does the Xenogears/Perfect Works arc in full, finally. They could have called it Xenogears Origins, and it would have worked. Mira and New Los Angeles could essentially be the original name of New Jerusalem - perhaps a re-christening once the human bodies are reconstructed.

I have yet to finish XC2, so no comments on that one.

After looking at it more closely, it does look like both ships, but from a distance, with a stream of smaller ships fighting between them. I am going to download or replay the cut-scene on my Wii U so that I can see from a higher quality version. 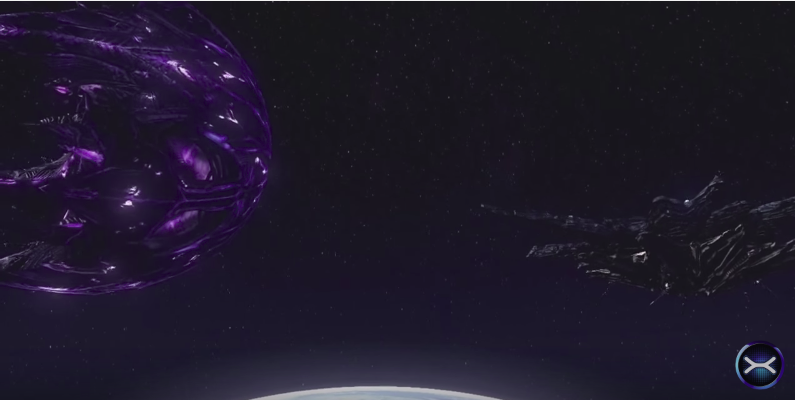 On what chapter are you?

Rarely does an online run through get into the hints in connections between games.1

To get to the inconsistencies, remember by the time Xenosaga rolls around mim tech will be thousands of years old and shared greatly through the universe. Also, a lot of locations in Xenosaga are military strongholds, ships, secret labs, ect. Note there are aliens on the planets, just no intelligent species, but as said before. Then in Xenogears they lose the tech and are pretty much limited to what they can dig up, back come the aliens. Most important to them would be the gears, and there's much on the ship they can't decipher.

Abel as a bio weapon vs passenger is basically memories vs reality. Xenogears was memory of past lives, but can be very flawed.

I am not a expert on all the Xeno-meta but I do know that supposedly Xenogears, the first game, was actually supposed to be episode 5 of a bigger arc. Within that game or supplemental works, there was a story about humanity traveling the stars which easily could be pulled from XCX's background story.

Within the game itself, the artificial bodies, the mystery of the ending on the nature of New LA and other stuff could easily be moved towards stories as we see in Xenogears and Xenosaga, but at this point no one really knows if there is a plan or what it is in regards to the meta. Given their chummy relationship with Bandai Namco, a game that more closely links Xenoblade and Xenosaga, probably could be done but we will have to wait and see. XCX could be connective tissue but time will tell because this really wasn't a true stand alone game besides some of the mechanics.

I don't know how far they can even connect the universes to Xenogears or Xenosaga. Xenogears belongs to Square Enix and Xenosaga to Namco as far I can find on the net.

Well, they were allowed of using Kos-Mos as a Rare Blade. I don't think they will go deeper than those references until Namco says "Well, fuck it. You can do whatever you want. Re-Release the games on the Switch if Nintendo plays the publisher."

Bandai Namco, Monolith Soft and Nintendo have a pretty cosy relationship. Square Enix could be an issue but it isn't exactly a big one, all they have to do is change the names, have new music and some of the looks for characters and they could potentially do a whole sale Xenogears remake just underneath a different name. If they ever did a remake, the plot would no doubt be altered so it isn't that difficult but there is still always a possibility that they could eventually come to an agreement with Square Enix as well. But linking all the previous game franchises could be done, it would take a massive amount of set up and I get the feeling after the issues with trying to do that with Xenosaga, they aren't in a rush to do all that in one or two games at the cost of game play anymore.

I think it's a little more than just memory. Here's a visual of each ship just prior to their arrivals on the planets:
Xenogears 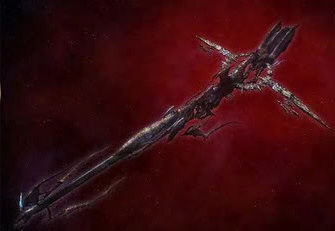 Similar in many ways, they share the same shape, and they both have the Deus weapon at the core.
Where they differ is that Xenogears is clearly a colony ship in the opening cutscene; while the ship in Xenosaga was created in seconds by Yuriev, who was using Abel's power.

In Xenogears - the party explores the ruins of the ship in two segments, first - the tower of Babel which encompassed much of the living space. It housed enough population that they required a monorail to get around on the ship: so probably in the millions. The portion that lies beneath the ocean, where the weapon is housed that had been loaded aboard the ship. The ship is very clearly the ruins of what was shown in the opening cutscene, a colony ship. So I think we can accept that as not a bad memory. We also see a cutscene where Abel makes contact, but this occurs after the ship had crashed. In addition to Fei's memory of Abel making contact with the Zohar, and the formation of the original Elly, The Wave Existence also confirms the story, and confirms that Abel made contact after the descent to the planet. Elly was formed due to Abel's loneliness.

In Xenosaga - the ship is completely devoid of any living quarters and doesn't even seem to have much or anything in the way of technology aside from the ES units (and Yuriev's that looks like the Xenogear). It's a large vessel that looks like the internals of giant Gnosis; it's like internal guts and energy waves.

The stories we see of how the ships arrive are different too.

In Xenogears - we see a colony ship traveling through space. The Deus weapon reawakens, and the crew attempt to stop it. The captain self-destructs the ship, and it crashlands on an alien planet. Abel is the only survivor, and he makes contact with the Zohar after the descent (as mentioned above).

In Xenosaga - the ship explodes at the end we see Nephilim transform into Elly and, along with Chaos and Abel, teleport the core of the ship to Lost Jerusalem (Earth).

So while I think Xenogears and Xenosaga are following the same general plotline, they are two different stories. Like a retelling of the Xenogears story rather than them actually being in the same universe. Kind of like how Disney's Hercules use the same character as Hercules the Legendary Journies, but they are not really the same universe. I think Takahashi wanted to tell a story from that era, but didn't want to be bogged down and limited by having to remain consistent with Xenogears. Also, Square owns Xenogears; although - I will note, that is not a limitation on them connecting the stories now, with a bit of Nintendo influence - and maybe money - it would be trivial for them to arrange to license anything in either Xenogears or Xenosaga. Essentially, if Nintendo wanted to make/remake a Xenosaga or Xenogears game, they could easily arrange to do it.