More than twenty people have been killed and at least 100 injured in a mass shooting at a Las Vegas concert.

A gunman opened fire from the 32nd floor of the Mandalay Bay Hotel toward an open-air music festival being held close by.

Police said a suspect identified as a local resident had been shot and killed by officers.

They said they were looking for a companion travelling with the suspect as a "person of interest".

Hundreds of people fled the scene and the sound of what appeared to be prolonged automatic gunfire could be heard on videos posted on social media.

There had been reports of other incidents at different locations along the Las Vegas strip, but police say they believe the dead suspect acted alone.

A hospital spokeswoman said 14 of the wounded were in a critical condition.

Witnesses reported that hundreds of shots were fired.

Many hotels on the Las Vegas strip close to the scene remain on lockdown.

Parts of Las Vegas Boulevard were shut as armed police arrived at the scene of the attack.

People have been sheltering in hotels, restaurants and at Las Vegas McCarran airport. 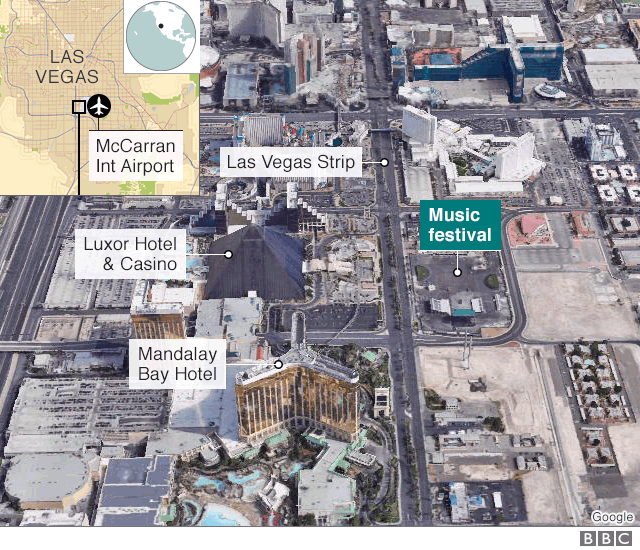 Some flights were diverted after news of the incident emerged.

The country music festival had been taking place since Friday at several hotels on the Las Vegas strip.

Their are some disturbing pictures/videos. I not posted them for good reasons. All we know is that the suspect is neutralized (seems to be a local resident).

Las Vegas police say they are looking for a female companion of the shooter.

Sheriff Joe Lombardo said police are interested in talking to Marilou Danely, an Asian female, who they have not yet located.

The officer said Ms Danley had been travelling with the gunman - who has not yet been named - before the attack.

Why is this in "politics"??

I felt like the 'general' discussion thread is more for light hearted discussions. This kind of threads always end up with politic discussions anyway but if a mod wants to move it to General it is fine by me.

Thing is, this shouldn't be political ... but you know it's going to go there

Sad that death has to be political.

NRA: "Guns for everyone. If they had guns they could protect themself."

When will you Americans learn about Gun Control? It does work.

This is in the political section because it has political repercussions and often reasoning's therefore correctly categorized. One would need to be deluded to not expect Trump to start Twittering this event or make a speech tomorrow (later today).


That being said this is absolutely a nightmare. We just had a terrorist attack in my city last night that was quite horrendous but nothing even remotely on this scale. Do they know if the suspect has ties to Isis or if this was perpetrated by an American born citizen?

Local resident + asian partner named Marilou Danely (but she can be totally innocent and I suspect so). Name also says nothing about origin Danely is more common in Denmark for males and Mariou is only a bit more popular as a name in France than USA...

The problem is beyond gun control. There are too many souls living here and in  In a semi-free market there also comes a black market (obviously because its not completely free). You cannot stop people in America from getting guns, no less than you can stop illegal drug trade. Take away the guns too and no one will be able to defend themselves. American has been entrenched in gun culture since its inception.