The question is very pertinent to your question.

As you are assuming the reason behind my question, and are wrong, I can tell you it isn't pertinent.  If you read through all my responses to the topic about the new IP you would notice that the one game being new or not wasn't pertinent to my question as it didn't change the question.

Now I am asking a question of genuine curiosity about a game I haven't played.  But you keep on assuming and answering with questions that aren't pertinent to it.

I know the fun is choosing who won E3 and sticking up for our favorite brand but, for some reason, that's not how I see it this year. I just look at what's coming for my console(s) and how bright their future is. In that regard, all three brands have something for me to look forward to in the near and distant future.

First, to Ka-pi, why did Sony do well this generation? If you compare 2016 to 2009 (about 3 years in to their respective generations) both hardward and software sales are DOWN. Every system is doing poorly except the 3DS and the PS4. Almost all the increase in PS4 hardware and software can be explained by the decline in Microsoft's hardware and software. This mean's the PS4's success is due not to some fabulous business maneuver but due to consolidation. Sony would have been in dire straights if Microsoft didn't create a DMR Kinect machine. A lot of people who think Sony is doing so well seem to ignore this fact.

As to your comment: Playstation is tethered to the TV with no way out. Sony needs to escape the shrinking box (this isn't an issue for Microsoft as they are turning their consoles into entertainment PCs). Fewer and fewer people are buying or watching TV. So any system tethered to a TV will suffer. The Switch is a transition. It can easily become just a mobile console once the bottom falls out. But Sony doesn't have any kind of plan. Sony is basically sticking with the PS4 and hoping it works out. For comparison, this would be like having factories in a warring South American country, and instead of getting the hell out, you double down your investment.

Sony hasn't been able to compete in a handheld space with Nintendo. The PSP lost to the DS and the Vita crashed and burned. However, the market is moving towards mobile gaming. Since Sony can't compete, what are their options? Stay on the sinking ship or try to get into portables again? Even if Sony makes a Switch like system, would their core accept that? This would mean the PS5 wouldn't be much stronger than the PS4, which would leave Sony fans very upset.

Sony is a lot like Sega in the last legs of its console run. Sega was living in a time long gone. They wanted to make arcade games in the home. The Dreamcast is still an awesome system for arcade games. Nevertheless, the market didn't accept it. Now Sony is doing the same thing. They are making "cinematic" games, but the market is moving away from that. The arcades were absorbed by the home console (which started the "war for the living room." ). Now, the home console is being absorbed by the handheld console as performance has hit its peak. Sony wants to keep making cinametic games of Gen 5,6 and 7, but the market is moving away from that. Even if they do release a Switch clone, will Sony have the right games? Probably not.

Why would your average consumer want a PS4 or a PS5 when they can buy a Switch they can play anywhere? Why buy a PS4 or PS5 when you don't really need a TV anyway (which is where we are going based on the data). So how does Sony compete? Too many analysis look at the present. "Sony is doing well now so they will do well in the future." Kind of like "The Wii U did bad so the Switch will do bad" And we all know how that turned out.

TL;DR - TVs are dying and Sony is tethered to the TV. Consoles are being absorbed by handhelds and Sony has never been able to compete in this space. Sony will struggle to make a Switch clone as their core wont accept a minimal upgrade in power. Sony is like Sega in they are in the wrong generation. 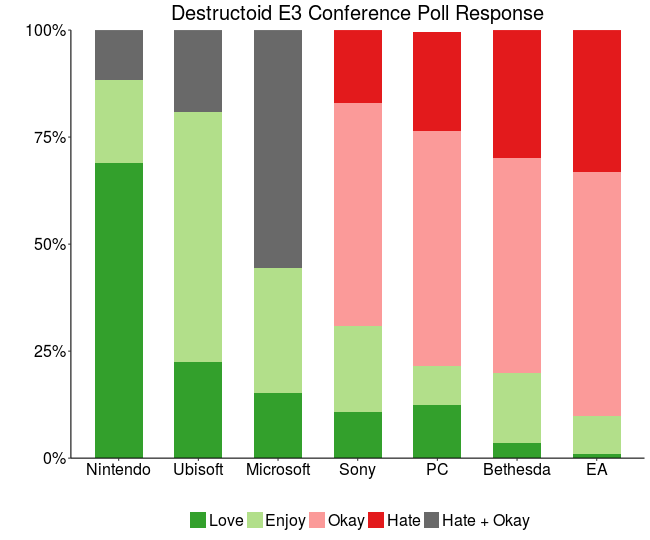 Made me laugh my ass off.  joke post or not ?

Why would the average consumer want a PS5, same reason as the PS4.  To play games like GTA Battfield COD Destiny ex aka Not available on but but but  portable Switch.

Tv is not dying its just saturated, will enter basic replenishment patters with minor ups and downs.

Big Nintendo fan. Voted Sony because I am still not quite sure why everyone is so excited by Nintendo's showing. They had the games from the first reveal trailer, and very little beyond that. Yoshi and Kirby look OK, but I cannot get excited about these. Odyssey looks fantastic, if a bit weird and in an anti-climactic way less 'wonderful' than Mario Galaxy. Metroid Prime 4 was a joke -- you don't show logos. When I see the game, my opinion might change as I hold Metroid Prime 1 to have been the best game of its generation. Return of Samus should have been on both 3DS and Switch -- massive mistake. All they have to do is upscale it to 720p / 60 FPS, and add better lighting and this would have been a perfect game for the Switch now until Metroid Prime 4 arrives. Third parties were really no show.

Sony, on the other hand, had everything: third parties, exclusives, incredible diversity of titles. They won the show, even if Nintendo must be commended for showing the way with so many first-party products in development. Nintendo is returning to full force, but they will have to do much more than that to convince me.