Egh. Link him this thread and we'll discuss with him about how much of an asshole you are. Or he just reads it. He then makes up his mind and punches you in the face or forgives you... or both. Then you buy him a hooker- no, 2 hookers, some bottles of champagne and a Ferrari. Then he punches you again, cuts your dick off, says "It's just a prank bro" and you guys are even

Might take you some months to get that second punch; depends on how long you paid the hookers for. PS: the first 2 sentences are the serious ones. Although, if you could make the others possible, he might forgive you sooner rather than later. 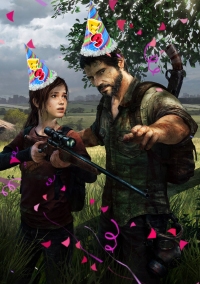 I was going to say how horrible you are (though the story is probably a fictitious one), but then I remembered I did the exact same thing, in fact worse in some ways. The difference was that we convinced him that she was really crazy about her sports team of choice and wearing earrings that match the color of her team would be a nice gesture. He got his ears pierced and bought some strangely colored earrings and started wearing those. He took it a step further and bought clothes with the same colors as well. Damn, I completely forgot about this.

We never told him though, and even if he had learned it in some way it wouldn't really matter because he wasn't a shy guy or anything, he was just a little stupid. You should be careful, some people might not take it.

This same thing happened to me in high school (it wasn't as elaborate). I'll spare you the details and say it was devastating. I've never really gotten over it and it stays with me to this day. The feeling of feeling completely alone and then finally having someone notice you, is an incredible feeling. What's truly devastating is having that ripped away from you, everything you knew was a lie, and your back to that point of loneliness, but it's much worse now. This sort of thing can last a lifetime. This is no joke.

Don't believe how serious this is? Google "Ryan Halligan's suicide".

@those who are saying the story is fake: It doesn't matter if it is, or not. It's happened, and it's nothing short of bullying in the cruelest of sense.

His cousin had a week of emotions building, falling for the girl.  If the girl was playing the first day then revealed the prank, then at least the cousin didn't have enough time to build feelings for her and wouldn't have been so crushed.

To the OP, you realize you have permanently changed that boys life for the worse, he will never have that leave him, you betrayed his trust, to do that to such a nice guy, your cousin is one of the lowest and most damaging acts you could have inflicted on him open a stream , put a rope from the ceiling and hang him , surely his cousin will feel better about it , of course you deserve and by such brutal and callous act on his part , thought that he never can have confidence in talk to other girls by that joke? finally let the guy if he really want his friendship again he will talk to you .

I wouldn't expect him to forgive you anytime soon, if ever.

im gonna be brutally honest here... if i was him i would have punched you in the face, now in terms of what you can do, well you can start by not bullying him anymore with those type of subjects, (actually dont bully him at all), also you shouldnt expect him to forgive you, just be glad if he ever does.

All 3 of you involved in this are f***ing shit for brains trash. And I thought maybe you were a kid. It says you're 23 in your profile. TWENTY THREE! WTF is wrong with you? Who does shit like this at that age? Learn from this. Anyways, I'm done. Hope you're cousin is ok. And in spite of my admonishment, hope you are ok too. You've taken some (well deserved) heat over this.