If not, who will be up and who will not? 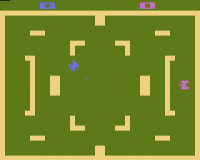 I think PS4 and One will be up, Vita either flat or somewhat down, 3DS considerably down and Wii U somewhat down.

No, 3DS will be down, and maybe the Vita.

Reason PS4 and Xbone will be up much is because both will get a price cut this year, I expect both will be 299. Wii U too might get a price cut but I don't expect that to make a big impact when the more popular consoles' price are down as well.

Maybe will be down, but at least not by much because the new version.

If you mean reaching 100M as fast as Wii, no, no one will do that, if you mean no console will reach 100M at all, you'll be wrong. PS4 is destined to reach that milestone.

This gen won't perform as well and it's all due to Nintendo's casual audience gone. It painfully shows how much of the install base of Wii was comprised of non gamers.

PS4: It will keep selling wonderfully, but I'm not sure it will pass the 20 million units sold per year. This thing is just like a boulder rolling down the mountain: it just can't be stopped. The only thing that could actually stop that is if the XBone made its online free, and Microsoft won't allow that.

XBone: If it gets a decent price cut, combined with Halo 5 it could sell better than last year, but I think the PS4's shadow is too big. With more varied titles and its strength in every region, the PS4 is going to steal most of XBone's potential costumers (Xbox brand is really competitive only in North America and UK).

WiiU: The thing with the WiiU is that, because its regular sales are so low, it's very easy to improve year over year, even slightly. We can compare the MK8+Smash U boost to Zelda+Xenoblade+MMaker (+ price cut, Nintendo? Pretty please?). This is going to be the best year for the console, even if it isn't by much.

3DS: It has used most of its heavy hitters already, and most of the people that wanted a 3DS already got one, so no impressive hardware sales, even with the N3DS. The poor system has faced the mobile uprising very well if we consider the market situation. 3DS is not as popular as the DS and it has way more competition than the GameBoy lineup. The fact that the machine and its games have sold as well as they have done its really impresive.

Vita: Very similar to the WiiU. Its regular sales are so low, it's very easy to improve year over year. However, the PS4 will mostly steal its thunder in Japan and Europe. It will sell less than last year, specially if Sony keeps porting Vita exclusives to the PS4.

Last gen consoles: PS3 will reach the 150$ price cut already, but aside from that, nothing is really going to change. The lack of backwards compatibility of this gen forces consumers to buy one of these to play those games (even if remasters are trying to solve this). The Wii will probably last more than anyone expects, because at this point Nintendo could sell a Wii+two games at a 50-60$ price if Nintendo wanted to. Wii games keep selling really well despite their age and lack of online, so why not.

3DS will be down YoY no question