Update for the new season will be up either later today or tomorrow. Sorry its taken so long this time around, haven't been home much.

Hm. Looks like GATE is heavily edited, at least up to now. The bandits that Rory the Death Loli killed, for instance, were in the process of raping a family in the manga, and she was a lot more ... disturbing. It also had a LOT more carnage, death, and destruction with the dragon sequences.

I only mention that because the manga tries to be quite realistic and gritty in some areas, even when it's dealing with dragons and elves in others.

Wakaba Girl continues to be awesome. That's not too surprising. From the start, it seemed pretty clear that they were aiming for a more T rated experience, so anything excessively brutal from the manga will likely never make it in. I'm enjoying the show though for what it is.

I started watching School-Live the other day. Yep. This could be one of my favorites of the season.

All these animes trying to copy K-ON is really sad. I mean, get your own genre to be successful. Goooosh!

LOL! That made me laugh so hard

The 2nd season of ufotable's adaptation of the Unlimited Blade Works route of Fate/stay night.
(anichart)

The story takes place in the town of labyrinths, Orario, also called "Dungeon." Bell Cranel is a newbie adventurer that admires "Having a fateful meeting with a person of the opposite gender." One day during an adventure, he is attacked by a Minotaur. Close to destruction, he is saved by a top-class female adventurer, Eyes Warenstein. He falls in love with her at first sight, and begins actions to become an adventurer that is on her level.
(anichart)

This spin-off of the Haruhi Suzumiya series takes place in the world of the "Disappearance" arc of the original novels, focusing on the high school life (and romance!) of a tentative and bashful Yuki Nagato quite unlike the one you've come to know and love through the usual exploits of the SOS Brigade... but no less charming!

As the shy head of the Literature Club, Nagato has had a hard time recruiting members. Her close friend Ryoko Asakura supports her in this. Drafting Kyon, she eventually meets up with Haruhi Suzumiya, Tsuruya, Mikuru Asahina and Itsuki Koizumi, and has to put up with their hijinks while trying to romance Kyon. Asakura seems ambivalent about the latter prospect.
(anichart)

In the prosperous kingdom of Pars lies the Royal Capital of Ecbatana, a city of splendor and wonder, ruled by the undefeated and fearsome King Andragoras. Arslan is the young and curious prince of Pars who, despite his best efforts, doesn't seem to have what it takes to be a proper king like his father.

At the age of 14, Arslan goes to his first battle and loses everything as the blood-soaked mist of war gives way to scorching flames, bringing him to face the demise of his once glorious kingdom. However, it is Arslan's destiny to be a ruler, and despite the trials that face him, he must now embark on a journey to reclaim his fallen kingdom.
(anichart)

Centers around Junichirou, a young man obssesed with manga, anime and games. He was a young genius who published papers in the journals Nature and Science when he was only 17. However, after graduating college, he became a NEET (Not in Education, Employment, or Training) absorbed in his anime blog. Unable to watch Kagami throw away his life, his sister Suzune gets him to work at the Ichou Academy she attends. The head of the school's board, Koyomi Hiiragi, assigns Kagami to his new life as a teacher.
(anichart)

The Digimon Adventure 15th Anniversary Event announced that the characters of the first Digimon Adventure anime are returning next spring. The video shown at the end of the event described the main character Taichi as being 17 years old in high school with his Digimon partner Agumon. The sequel series will tell a "new story" "for all the 'DigiDestined' in the world." "Now, [once] again, the adventure evolves."
(anichart)

The story revolves around Eto-shin. "Eto-shin" are the 12 divine messengers chosen from "Eto-musume," or zodiac girls representing all kinds of animals. From ancient times, these 12 divine messengers have protected the land of the rising sun. They are powerful beings who have survived through "ETM 12," a divine tournament held every sixty years, and admired by all Eto-musumes.

Fast forward to now, the present day, and the year ETM 12 will be held. From all over Japan, Eto-shin candidates, or in other words, Eto-musumes gather in great numbers.

Within that group exists a single cat Eto-musume.

Her name is Nya-tan. She is thought of as the one closest to becoming an Eto-shin, but is a misfortunate girl who always ends up undermined by evil rodents.

The only way to become the 12 zodiac signs is to beat all the Eto-shins. However, the power of the Eto-shins is so great, and no Eto-musume has ever won in the tournament for the past two thousand years.

The Grisaia no Rakuen visual novel continues the Grisaia no Meikyuu visual novel's main route and concludes the trilogy. It also includes a prologue following the five heroines as they arrive at Mihama Academy.
(anichart) 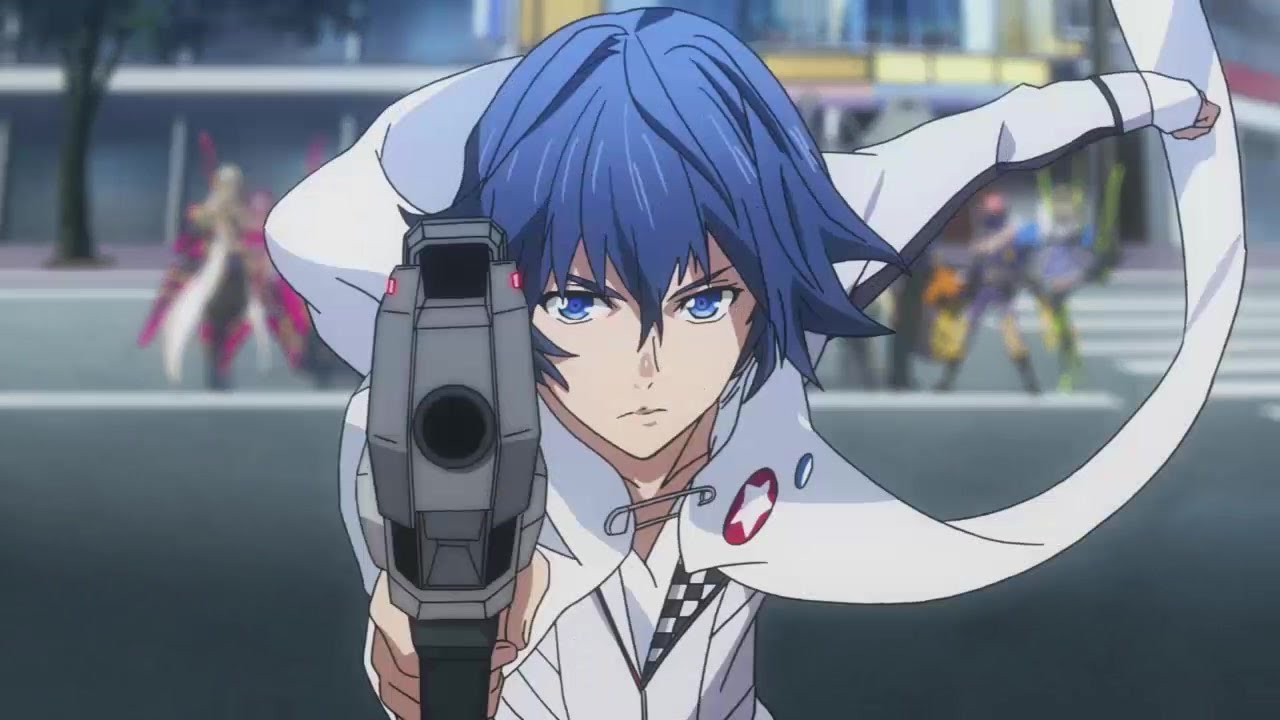 The citizens were promised a life of peace in exchange for some of the comfort they were used to having. People believed their lives would never change and tomorrow will be the same as today. No one suspected the impending doom which their society was about to face.

“Degradation”—a rare disease which led to the total disintegration of the human body to a mere pile of sand was slowly but surely spreading throughout the world.

Tohru Kazasumi, an ordinary student becomes embroiled in a multi universal battle between his world and the parallel world of “Frontier S (Stratos).” This meant that Tohru must fight himself from an alternate world.

Their futures collide as their paths cross. Will both worlds ever find peace?
(anichart)

Subaru is a young girl who discovers that her best friend Aoi is part of magical group trying to gather engine fragments so that a little being from Pleiades can return to his home. Subaru considers joining them as she was chosen by the Pleiadian, president of this afterschool club.
(anichart) A breach between Earth and the netherworlds has opened up over the city of New York, trapping New Yorkers and creatures from other dimensions in an impenetrable bubble. They've lived together for years, in a world of crazy crime sci-fi sensibilities. Now someone is threatening to sever the bubble, and a group of stylish superhumans is working to keep it from happening.
(anichart)

As a child Sakura Mamiya mysteriously disappeared in the woods behind her grandma's home. She returned whole and healthy, but since then she has had the power to see ghosts. Now a teenager, she just wishes the ghosts would leave her alone! At school, the desk next to Sakura's has been empty since the start of the school year. Then one day her always-absent classmate Rinne Rokudo shows up, and he's far more than what he seems!
(anichart)

The anime takes place four years after the JS incident in Magical Girl Lyrical Nanoha StrikerS, and stars Vivio Takamichi, a fourth-year elementary student at St. Hilde Academy of Magic. Vivio has learned to conjure her adult form and has received her own Device — named Sacred Heart — from Nanoha, and has promised Nanoha to never use either for mischief. Then a mysterious magical fighter appears and targets Vivio.
(anichart) The story of the original light novels and manga revolves around high school girl Eruna Ichinomiya, who enters the Mikagura Academy dreaming of a boarding school life filled with beauty. However, Eruna finds out that in the culture clubs, there is a rule that battles that are fought with special powers decide a club representative's treatment. Through various circumstances, Eruna becomes a representative of a club, and is thrown into the fray.
(anichart)

Takeo Gouda is a giant guy with a giant heart. Too bad the girls don't want him! (They want his good-looking best friend, Sunakawa.) Used to being on the sidelines, Takeo simply stands tall and accepts his fate. But one day when he saves a girl named Yamato from a harasser on the train, his (love!) life suddenly takes an incredible turn!
(anichart)

The story takes place in a world where an unknown virus has killed the entire human population except for children. Those children were then enslaved by vampires. The manga centers on Yuichiro Hyakuya, a human who dreams of becoming strong enough to kill all vampires.
(anichart) This story takes place in a future not too far away when androids that look exactly like humans begin to spread across the world. The android production company SA Corp. produced Giftia, a new kind of android that has the most amount of emotion and human-like qualities out of any other model ever seen. However, due to problems in technology, the androids have a service life, and once they pass that, they... Well, it gets pretty bad. For this reason, SA Corp. creates a terminal service in order to retrieve Giftia that have gone past their service life. A new employee at the terminal service named Tsukasa Mizugaki forms a team with the Giftia Isla to retrieve the other androids, but...
(anichart) 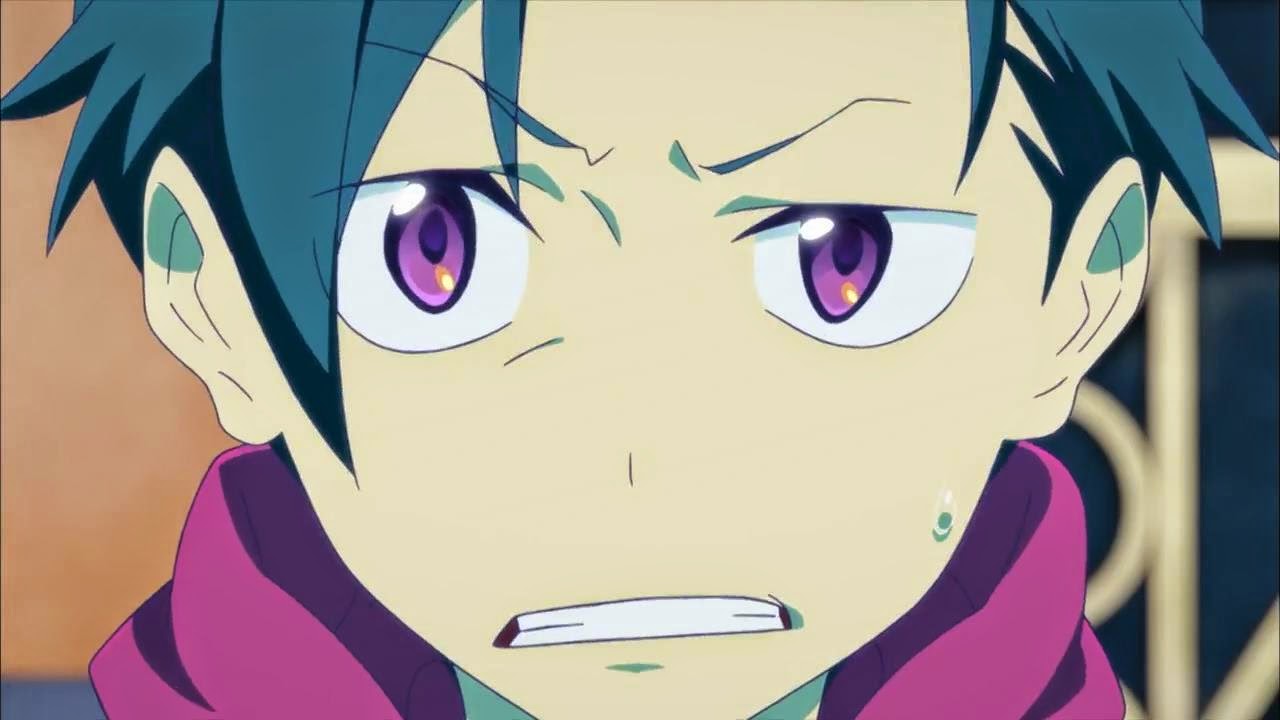 High schooler Yuuta Iridatsu has experienced “astral projection” i.e. his spirit has been separated from his body. He woke up in a mansion named Koraikan and met a cat spirit named Chiranosuke, who told him “You must find the Sacred Tome of Koraikan in order to return to your physical body.” While searching through corridors of Koraikan, Yuuta bumped into some of its female residents, and wound up creating big trouble for planet Earth.
(anichart) 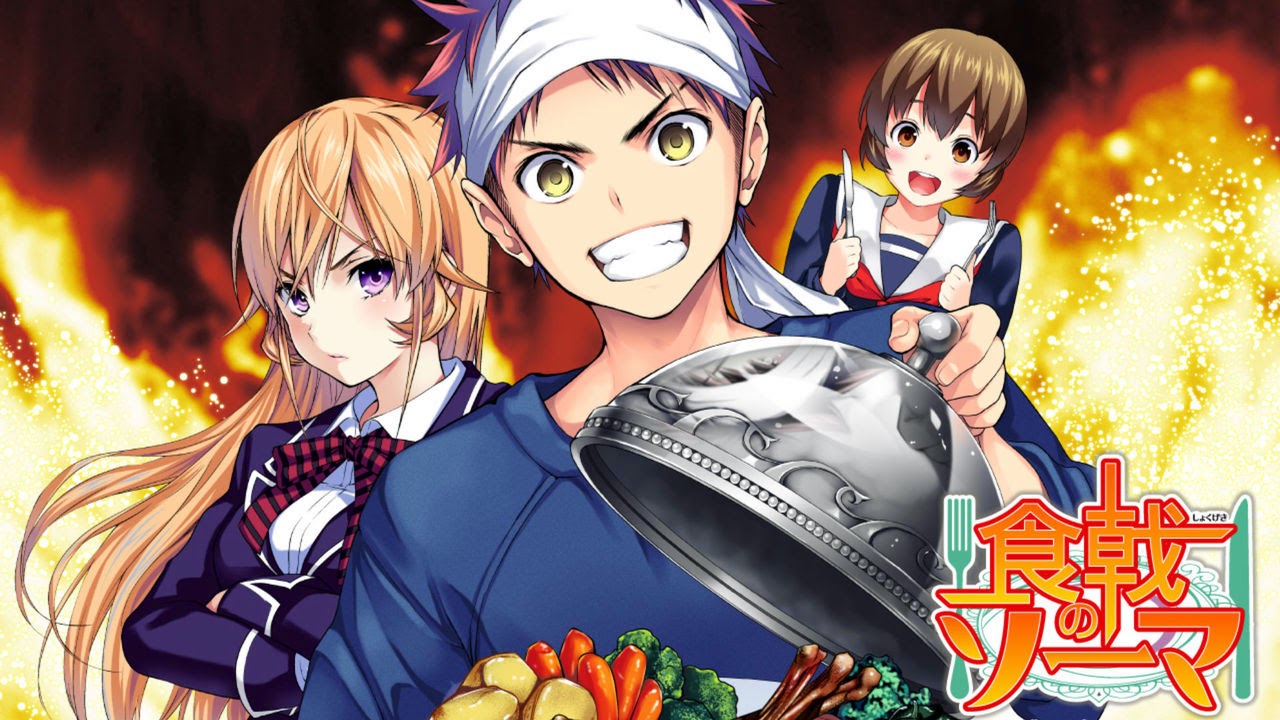 The anime adaptation of the Shokugeki no Souma manga that centers on Souma, who works with his dad at his family's restaurant. His dad is a culinary master, and he often hosts cooking battles with his father. His father then enrolls him in an elite culinary school that is very difficult to enter, and the graduation rate is only about 10 percent.
(anichart)

Season 2 of Knights of Sidonia 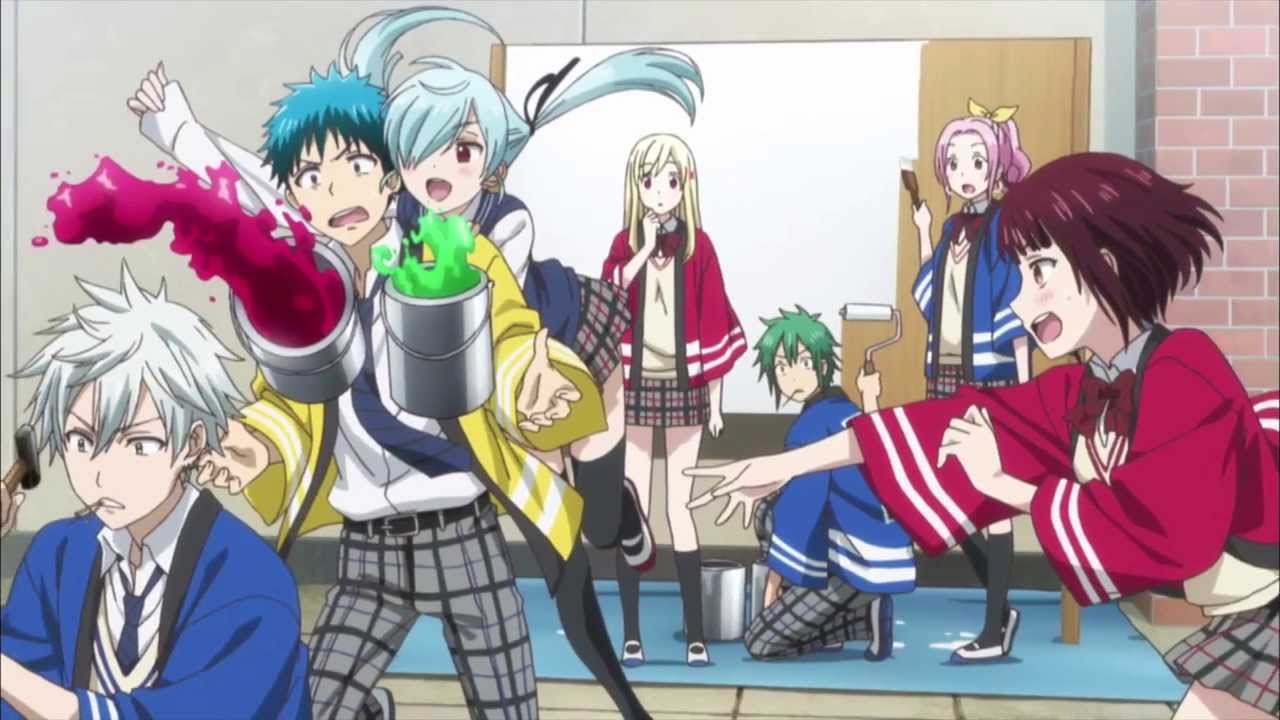 Ryu Yamada is a second year student at Suzaku High. Ryu is always late for school, naps in class and gets abysmal grades. His life is a dead bore. The beautiful Urara Shiraishi, on the other hand, is Suzaku High's brightest student. One day, without explanation, their bodies are swapped! Ryu ends up in Urara's body, and Urara in Ryu's.
(anichart)