So i will ask again: will be any investor meetings today?

2.82M for MK8. It already outsold 3DWorld + DKCTF in just one month. Amazing.

Tell that to polygon, of course they'll try to spin it somehow >_> I don't think so. It seems there won't be any Q+A or anything, but we'll see. I wanted to hear more about QOL and their plans for their next hardware.

Soundwave made a good point. This is the first time in Nintendo's history where financial losses are a regular occurrence. 1 loss in 25yrs prior to Wii U's launch. This alone should show Nintendo that the direction they took, both in handheld and home console was bonkers. Something will need to give because this is a business, and the aim is to make money, not lose it.

I don't know if there's much Nintendo can do though really, without sacrificing what makes them Nintendo.

The thing with their consoles is most people (minus fanboys who are only like 0.05% of the audience), don't really care about the console they buy per se. They just want the best "format". That means access to the most games, which Nintendo never has. A generic console called "Box" with minimal advertising head to head would beat Nintendo most of time if it just played third party games and not much else.

It's nothing personal to Nintendo, it would the same if I offered you one cable box that had 20 channels versus another that has 100 channels or a movie format, one which is supported by 5 movies studios and the other is only supported by Disney. Most people would chose the non-Disney one.

The handheld collapse is because of the smartphone/tablet market too ... not much Nintendo can really do about that.

Pretty dark days for Nintendo, probably the darkest in their game history. New hard ware wont be at least untill another 3 years, but I am more predicting 4 or 5  since they need to make up for the poor sales at launch

Have to agree. Not only is IMO Nintendo's next handheld already in the prototype stages hardware wise I think they're already beginning software development. It has to start to now if any chance of releasing in 2016, and the 3DS simply doesn't have the sales to justify a sales cycle beyond 5 years. 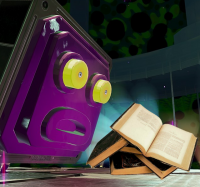 I would suspect 5 years for the 3DS, possibly 6 depending on how big the changes are on the next device (average has been about 6 anyway). If they abandon ARM chips in favor of unifying the systems, handheld and console, over the PPC chipset, then we might see a slightly longer development time as whole new kits and sets have to be made for developers, and old games won't work as they did from DS -> 3DS changes of ARM to ARM. They'll also likely want to have their usual handheld backwards compatability as they did with the DS to GBA.