So I think Ys could be Playstation's Zelda

Forums - Sony Discussion - So I think Ys could be Playstation's Zelda

Just hear me out on this. No, Ys is not quite as good as Zelda (not even near it currently), and yes, the gameplay is very different.

But they are also very similar.

One thing that strikes me about the Ys series is how great the dungeons are. I actually love the puzzles and items that you have to use to beat dungeons. Now, once again, Ys isn't Zelda quality. I know. But at the same time, it offers great dungeons, many with their own themes (like a fire dungeon, or a water dungeon) that seem like temples from Zelda.

Also, the silent protagonist. Adol and Link seem to have a lot in common. Both are silent, and the user has to choose their dialouge for them. Grated, in Ys, Adol has a wider amount of available dialogue due to the emphasis of character interaction, but in the end the player makes their own "personalized" Adol or Link depending on how they see them. Also, both are iconic faces of the franchise, and both are sword wielding badasses. Yeah.

Both series also have great monster design and bosses. I believe both offer great boss battles that legitimately require strategy. The monster design in both games are also amazing, with each iteration mixing it up to keep things fresh. While Ys puts emphasis on using different characters and skills instead of items like Zelda does to defeat bosses and items, both put emphasis on finding the right combination of weapon/character to devise strategy to defeat monsters, bosses, and solve puzzles.

Finally, both series feature great overworlds. While playing Memoris of Celcesta, I was surprised to see just how much I loved the map. It was huge, and each part was different and beautiful. There was tons to explore, and secrets and collectibles spread across it. I loved it about as much as I loved the Link Between Worlds overworld, and that's an accomplishment on it's own as Link Between Worlds had my favourite handheld Zelda overworld ever, even better than the original ALTTP.

Well, that's about it. I understand that Ys is currently overshadowed easily by Zelda. But, I think that if Nihon Falcom keeps expanding on the franchise (maybe even make a PS3 or PS4 version), they can have a seriously good game that could rival Zelda in gameplay and world.

Ys is definitely my favorite action RPG series, especially for those of us who enjoyed the early Zelda games back in the day, especially Zelda II (Ys III is like Zelda II on steroids.)

I just wish the newest games in the series weren't exclusive to Sony handhelds. I hope they receive some sort of ports in the future, because I'm not buying a PSP/Vita just to play Ys Seven and Memories of Celceta. I think I would rather see Team ICO to be expanded into a big studio, to "compete" with Zelda. In my opinion the games from Team ICO are the only really good action-adventure games that I would compare with Zelda and call good or equal.

And for my part Team ICO could make a game-series too, sort of like Zelda. I wouldn't care much about it being a rip-off or clone, but I know a lot of angry gamers would cry out about it online. But I would love for it to come true.

But I also like the way they make their games today, independent from each other and quite unique. Just a shame that we see so few games from them.

Ys rivaling Zelda? No chance, one is an RPG the other one is not, how can you compare them? And no Zelda is not an RPG!

I agree that Ys is not quite as good as Zelda, it is better.

....people could stop calling everything a Zelda clone because very few games are going to be original as an adventure game. Zelda isn't even original seeing that Hydlide predates it. 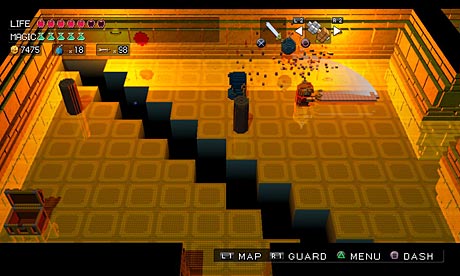 The thing I like most about the Ys titles is that they consistently have stellar boss fights that nicely balance strategy and skill, which is something that recent action games have completely forgotten. And I would argue the Name is another one