It's easy for devs to play along with a console's reputation, particularly when Nintendo's low-power consoles let them cut corners.

I really don't mind too much if it's about better pleasing each console's target market, but unfortunately in fan wars it usually becomes Nintendo's fault...somehow.

This is really going to be the generation style takes over graphics, though. Even the weakest hardware has plenty of power to put graphics on screen, so you have to have a cogent art-style to give those graphics a meaningful direction. That was kinda happening last gen, too, with great looking games like FF XIII having phenomenal art styles (if nothing else with that particular example.)

I am sure it's more powerful then the ps3/ 360 but only by a slight margin compared to the ps4/ Xone. It's just not enough to get the true next games running on it. 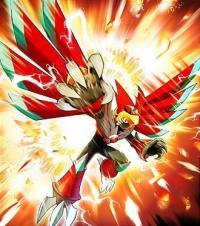 well, indeed 563.2GB/s of 32MB still looks a lot away from 8GB of 176GB/s, but we also have to consider that the guy is only taking into account the old 1024bits per macro of the 360 for the wiiu, so after 7 years maybe they can produce something like 2048bits per macro which would give something reallly near the terabyte, this also explains how sony was aiming for more than a terabyte of edram bandwidth for the ps4 with edram

even if wii u has a bandwidth with edram between 500gb/s and 1terabyte that wont make it stronger than ps4 or 360, jbut can give the enough boost to use the tesselation+dsplacements efficiently so that the graphics can still look close to what ps4 or xbox one can, still a step behind but close

maybe you should look at the window

this aint a lie dude

that is true info, just look inside

wii u edram is made from the same guys who made the xbox 360 edram, so considering somethin like 1024bits per macro after 7 years still looks low after what renesas said about wii u edram packing the best technology from that nec plant,a nd shinen also said that wii u edram provides so much bandwidth to the point of being scary, so i dont think 256GB/s of the 360 edram is scary, but something between 500 and the terabyte might be. Come on, even sony said that was aiming for an edram of a terabyte of bandwidth

wii u edram may have a bandwidth of 500 to 1 terabyte with edram, but that aint power so it isnt going to make it stronger than ps4 or xbox one, but if you cleverly use the edram you can take profit of the adventage of tesselation with displacements which would give a boost in graphics, an this also applies for the xbox one esram cause is similar, as for ps4, well since it uses gddr5 which has more latency and less speed than edram then it will not be able to use tesselation+displacements as eficiently as xbox one and wiiu, but will still league a step ahead of wii u but as for xbox one they might give the same results

as the article says, the wii u edram providing something between 500GB/s to a terabyte of bandwidth(the article just accounts the old 1024bit design used in xbox 360 per macro, and nintendo after all those years could have used something more up to date like 2048bits per macro) is only usefull if its used for tesselation+displacements, with this technique you can achieve million polygons models from models made of just some thousand polygons, you also use less memory cause the technique works as some kind of geometry compresion(the compressing ratio is big), also, the technique only tradeoff is about 33fps or 30% performance on the gpu for achiving these results, but still gives better performance and framerate than aiming to draw the polygons directly instead of using tesselation+displacement

"
The first and most obvious benefit of real-time tessellation and
displacement mapping is the dramatic increase in visual
quality. Tessellation in conjunction with displacement mapping
eliminates one of the last hurdles towards achieving cinematic
quality visuals in games.Film has been using this technique
for years in order to provide animators with manageable
meshes to work with during the animation portion of
development while still providing the highest quality results at
render time. This technique eliminates polygonal artifacts and
provides highly detailed, smooth internal and external
silhouettes.

Another slightly less obvious benefit of this technique is the
effect that it has on your memory footprint. Essentially, you
can think of real-time tessellation and displacement mapping
as an effective form of geometry compression. This technique
utilizes the same art assets as conventional rendering with the
only additional storage requirement being the 16 bit
displacement map. If we take the Froblin character as an
example we see that the memory footprint for the low
resolution mesh and 2k x 2k 16 bit displacement map
requiring about 10 megabytes of video memory. This is
compared to the 450 megabytes of video memory that would
be required to render the high resolution Froblin model that
weighs in at around 15 million triangles. So, for just a
modest increase in memory footprint, we are able to
dramatically increase the total polycount and visual detail of
the render mesh when using this technique.

Another less obvious benefit of this technique is in animation
quality. Transforming the low resolution mesh is faster than
attempting to transform the high resolution equivalent. This
means that we get better animation performance. Also, as we
just saw in the previous slide, we are storing exponentially
fewer vertices in video memory. This means that we are able
to store more data per vertex. What this provides us, for
example, is the ability to increase skinning quality by being
able to store more influences per vertex. This would also
allows us to store a much larger library of morph targets for
better facial animation, etc

Performanceis yet another benefit of real-time tessellation and displacement mapping.You can see here that when implemented with multipassrendering and vertex compression we are able to render over 400 times as many polygons while only taking a 33 frames per second or 30 percent performance hit when compared to rendering only the corresponding low polygon mesh. That is a pretty good trade off.
" 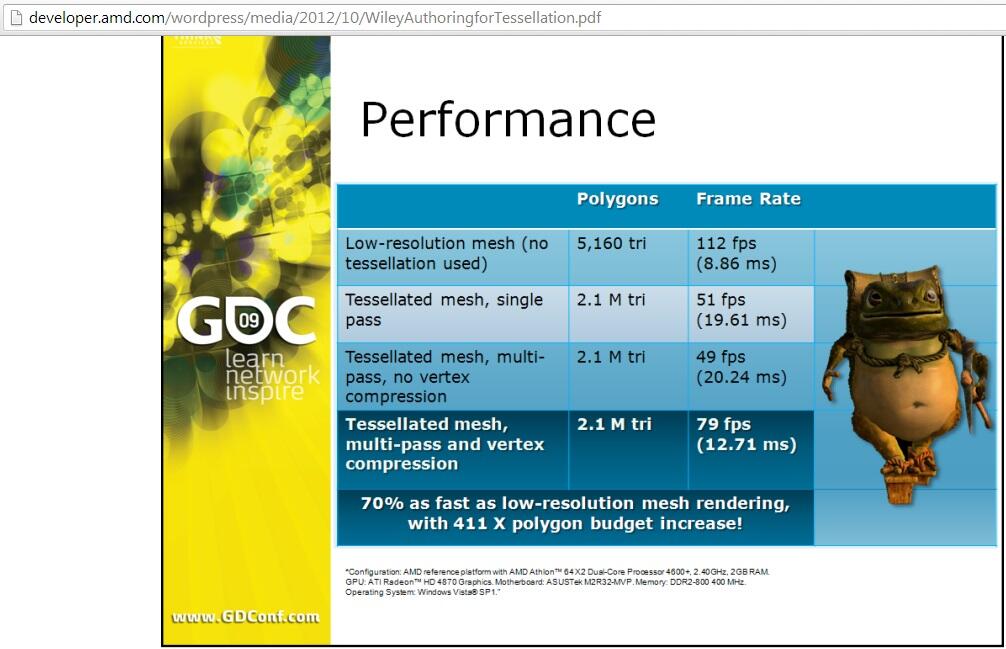 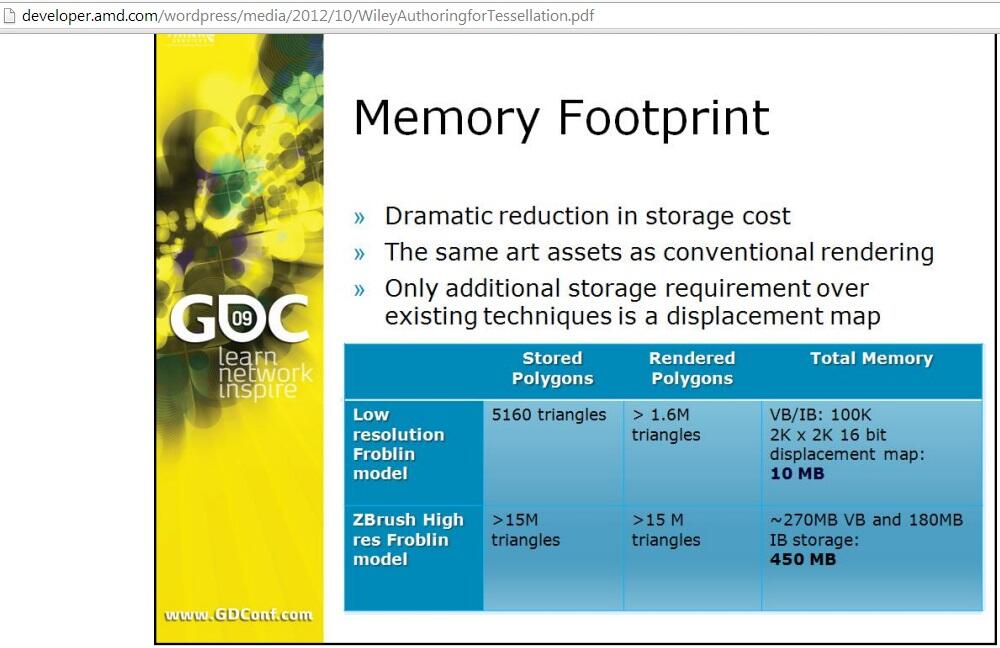 just hope in the future many titles will take profit of this technique, to bad the only game we know so far was going to use tesselation with displacements for wii u was shdow of the eternalsminute 7:50

The "Wii U devs can run 1080p games easily" thing is such bullsh*t.

None of Nintendo's own games other than a up-ported of a GameCube game (Wind Waker) run native in 1080p. They should know the hardware better than anyone.

Wii U is a system that runs games primarily at 720p and is moderately more powerful than PS3/360 (at best). Get over it already. There's nothing remarkable about the Wii U hardware (or XBox 1 for that matter). The PS4 is the only systems that a decent leap beyond the last gen, but even there a $150 PC card performs as well if not better than most of these consoles and completely annihilates a Wii U. Wow, you know more about this than 3rd parties! Are you a video game designer by any chance?

Hmmm, generally speaking I think a year after a systems release you should stop disecting the specs an just look at what developers are achieving. I never had any doubt the Wii U was a noticable step above the ps3 and 360. We've all seen X and Mario Kart.

According to eyeofcore, he claims that megafenix is a computer engineer but I'd say he's pretty much bullshitting after that fallout megafenix had with Pemalite ...

What does info about the xbox 360 have to do with the WII U ?

How are they made by the same guys when the xbox 360's eDRAM was designed by the guys at NEC Electronics and the WII U's eDRAM was designed by Renesas Electronics ? (See this is another one of your lies again.) What NEC plant LOL ? It's manufactured by TSMC. Do you even know what your talking about ? I want to know shin'en's EXACT WORDS, not some sprinkled up shit that you made up. Except it WASN'T 256 GB/s so get that through your thick skull and stop lying. What Sony said was a god damned EXAMPLE, not an actual implimentation that they were aiming for.

Tessellation performance has absolutely NOTHING to do with the interconnect bandwidth of eDRAM. Jesus, the rest of your post makes me laugh about your explanation on the mechanics of tessellation. You haven't the slightest clue as to how tessellation works.