I'd also say that Code Geass, Clannad and Steins;Gate are musts for anyone.

My all time favorite, Robotech 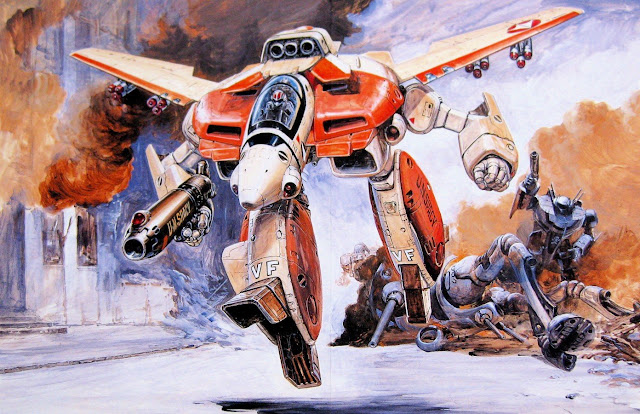 While it isn't 100% war and conspiracy, Attack on Titan definitely has elements from both of those within it.

I highly recommend Attack on Titan if you like intense shows that don't bullshit you with "no one ever dies" and the hero is always there on time.

Hunter x Hunter is also recommended, though it is more similar to action anime with the whole mystic powers and stuff. It looks childish from the first episode (the 2011 reboot, at least as it's the only version I have watched), but it gets dark pretty quick.

Space Brothers is also good, but it's very different than most anime. It isn't filled with fan service, isn't quite drawn the way a lot of anime are, and is very much set in reality. Its main draw would be the character development rather than the story itself. It has many funny moments.

Gintama is hard to recommend to someone new to anime, but I do recommend it after watching some of the other bigger anime titles as it often references them. Gintama is a comedy anime with occasional serious action moments. Not for everyone and has a lot of dirty humor littered all over, so it really depends on your type of humor whether or not you'll like it. If you have been living under a rock, start with Ninja Scroll & Ninja Scroll 2. You can also try out the series collection to see if you like, but I wouldn't recommend it. Ghost In The Shell & GITS 2 are good. I don't know if there is a Ghost In The Shell 3. The Sky Crawlers if you want a story but it drains me. You should also try out "Blue Drop".

Clannad! you have to watch it first!!! the greatest anime ever

The score next to the anime list are what i rated them :P You say you like war and conspiracy, huh? Fullmetal Alchemist or almost anything with Gundam in the title would suit you well.

I keep a rotation of about four different anime series that I watch at a time: two super long runners that never seem to end, like Naruto and Bleach (DBZ, InuYasha, and One Piece are also good for this). These kinds of shows don't take a lot of brain power and allow you to either watch sparingly and come back, yet pick up quickly on the plot, or to go on a binge and watch a dozen episodes a day, if that's your thing.

I also watch two series that have a designated beginning, middle and end based on the 13/26 episode season format, like Ghost in the Shell, Blood+ and Death Note. These kind of shows are usually better in terms of plot and character development, because they contain far less filler and waste less time getting to the point.

This. I've converted many, many people into anime lovers with that show. EVERYONE loves Cowboy Bebop.

I feel a little sick to my stomach that no one mentioned Akira or Serial Experiment Lain. Classics!