here it is.  one of the biggest rivalries for the greatest game of all time.  many people say that whichever game you play first, you generally like more and i think thats the truth.  ff7 was actually one of the first games i ever played and is still my favorite and i think its near perfect in nearly every way for its time.  now i do not discredit anything from ocarina of time, it is pretty damn good too, probably in my top 5, but theres just something lacking in it that just makes me like ff7 better.  i think perhaps the dialogue is the biggest thing.  ocarina of time has a pretty g-rated dialogue and it makes the game generally feel less serious as far as the world being in grave danger goes.  also, the songs in ff7 give me goose bumps.  however, every one just loves that tune when you find a new item or triforce piece in ocarina of time.  ff7 has sold 9.72 million and ocarina of time has sold 7.60 million according to vgchartz, but for me, the hardly does either game justice.  so what do you think is better?

EDIT: can someone tell me how to make a poll

I won't say until there is a poll. :P Easy for me since I don't like Final Fantasy at all and Ocarina Of Time is my favorite game of all time....sooooooo

The Legend Of Zelda: Ocarina Of Time!

yeah man where is the poll? (man how supferficial from me...thats like sayin the game is bad just because the graphics arent good) Nothing can match Ocarina of Time, I'm sorry. I liked both of them alot.

It was definitely the golden age of gaming before all the FPS craze started.

Though I imagine OOT will win this one because it's cool to hate on FF7. 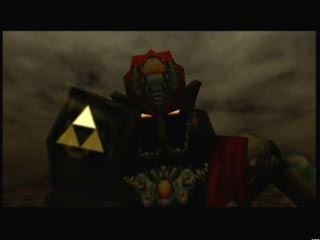 i cant seem to finish either but im in the final dungeon on 7 and oot scares me lol. I revel in my individuality.