So Red Steel First US Week 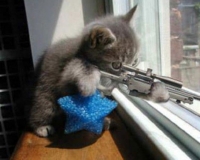 Well 500k is Ubisoft's updated expectations as of several months ago, and my guess is that at this amount (probably less) it will be worth their while. For HVS and Sega over 350k of sales was enough to warrant a sequel.

Then maybe, developers should make better games, if they want to charge so much? Maybe it's because only the best of the best are worth the price? And maybe, just maybe, you have no idea what you are talking about. The vast majority of Wii owners, do NOT have a softmod installed.

Check out my DS site. You are right about the vast majority not having a softmod installed, but the numbers are still significant.
My step son uses the same argument about it being ok to steal something if HE believed it was over priced. I believe otherwise.
Here are some of the numbers on Wii piracy. These are not complete for all piracy, but show some that has been tracked. As an example, look at the number for House of the Dead. According to VGC it has only sold 0.620M.  I also now realize there are other ways to pirate games besides the HomeBrew channel and it was not fair to single out that method. I have edited my original post above to reflect this.

Wii Game Downloads on BitTorrent in 2009

yes but are these channels free to air or paytv? I don't have those channels as I do not have paytv and I bet most people do not either.

Too bad. It's a good game and hopefully the sales pick up.

Its a good game, but it took me several days to find a copy because the stores I went to didn't have any copies; and even when I found it there was only 2 copies at the store. Now, this tells me that the shipment was (probably) pretty small it either sold out at many stores or wasn't carried by them at all.

Certainly can be. And you didn't specify any of that in your post, at all. You only made reference to the add on device, Motion + and seem to insinuate it not selling which is absurd. But not surprising in the least.

Well, I agree to some extend that it has an effect on sales of hardcore games, because it's the hardcore that has their Wiis modded, but if you think those numbers you put up there, had meant one sale for each of those downloads, you are greatly misinformed. Maybe 1% of those would have been sales, that are now just downloads. And nevermind all the people who buys the game, after having tried a downloaded version ... just like me. If you were in any way part of "the scene", you'd know that most crackers urge people to buy the product if they like it, and that is the standard moral in "the scene".

The real problem is pricing, especially in the poorer sections of the world and Europe. Too many normal people simply can't afford gaming, and when it becomes a matter of not being able to afford living, they will not(and should not) spend those money on gaming anyway.

Fuck Ubisoft, I'm not going to beg for their support by purchasing a substandard game.

Furthermore, I'm getting really goddamn sick and tired of people talking about how 3rd party games on the Wii don't sell and how somehow it's magically the Wii gamer's fault and we should support them.

There you go, the 3rd party wall of shame. Go ahead--put it up against the 360 or PS3 or PC's Ubisoft lineup. That record of 3rd party "support" should tell you everything you need to know about why 3rd parties are failing.  The worst of it is I imagine a lot of those crappy games made a profit that was used to make better games on another system.

So just to reiterate: fuck Ubisoft and I hope they go bankrupt.

Red Steel 2 scored an 82 overall. It is also a 12 hour game with no multiplayer and no replay value.  It may reach its target of 500,000 but it doesn't deserve that much (let alone more).  I'm certainly not going to help it and I sure as hell don't owe Ubisoft a goddamn thing--let alone my support (which they haven't given my platform of choice so why return the favor).

Something further along in that post as excuses why we keep getting bad games:
2006 - Nintendo included a free game with their console!  Our ripoffs won't sell now!  Boo!
2007 - This Wii is just a fad, people only bought it for Nintendo games and casual games.
2008 - Nintendo makes too many games!  How can we compete against Mario Kart Wii, SSBB, Wii Fit...
2009 - Nintendo doesn't make enough games!  How do we know what to rip off?
2010 - Wii, despite shattering sales records, is not a viable console for casual games.

It should be obvious by now 3rd party support is never going to come so 3rd party threats of a game flopping are really lost on me. Galaxy 2 wii be day 1 purchase for me, though.

Which shows he's just excusing what he does. If I did a download, I'm taking something and not paying for it. I admit it. Although I do try to obtain a legit version if I can (not just claiming that; I bought the Castlevania Double Pack because I liked Harmony and Aria so much). What your stepson is doing is just leaving room to declare anything he wants to download as overpriced.

Not claiming you stated otherwise. Just expounding on what he meant by that.