A ranking of the democratic primary contenders

It is time to have another overview about the field, after the fifth debate and the entry of even more candidates.

I made some overviews in the past:

This ranking/overview looks at the typical key indicators for successful runs. The commonly accepted key indicators are: polls (duh), endorsements and campaign finance. As the DNC has this year so clear criteria for the qualification for the debates, I include that as another criteria. Also I think media coverage both in traditional and in social media is important. And I have a 'other' category for some other data.

As before, I rank the data on the scale from A to E, with an occasional X for extaordinary values. For aggregated values I added a + or -, for cases in which the removal of the best or worst value changed the ranking.

All data is avaliable in a spreadsheet (the format is for the free program gnumeric).

Debate qualification is pretty straightforward. I count how often each candidate qualified and how many of the single criterias were fulfilled. The data comes from Wikipedia. A-rank is only available for reaching all qualifications or criteria. 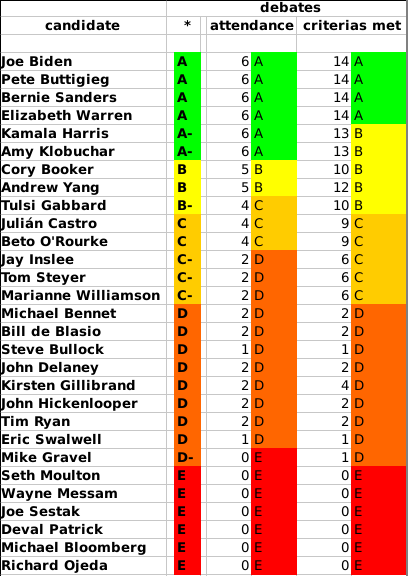 Only Biden, Buttigieg, Sanders and Warren so far have met all qualification criteria, although Harris and Klobuchar still have a bit of time to meet the early states criteria for the sixth debate. Everyone else missed out on something. It is no coincidence too, that the four named first are generally considered the top-tier currently.

As 15% is a hurdle set by the rules, I used that to determine B-rank. A-rank is 30%, as someone above that has a good chance to win. X-rank is set at 50%, because only ever one candidate can reach that. 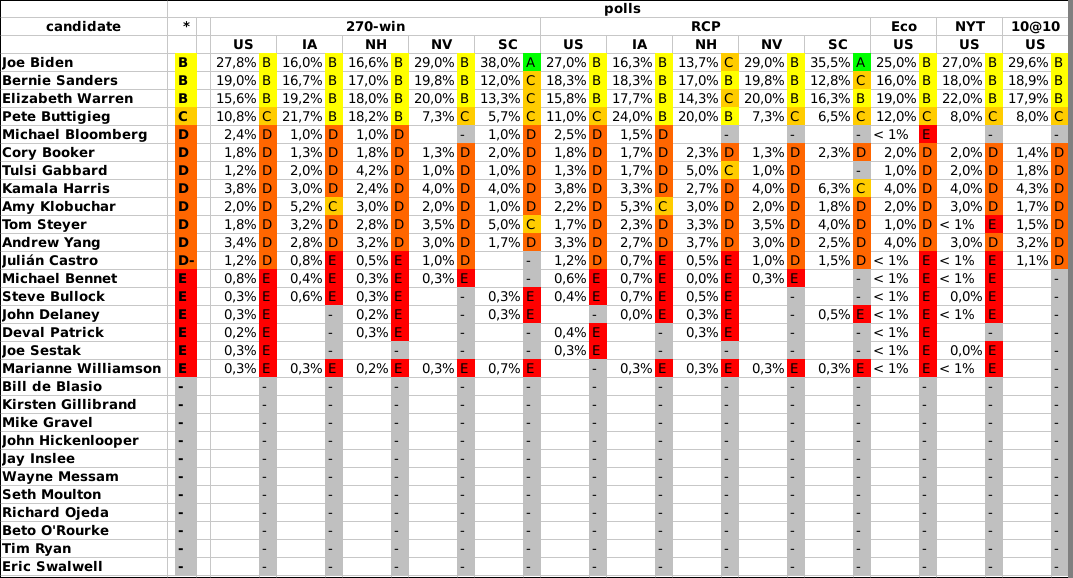 No candidate consistently polls above 30%, although Biden manages this feat in South Carolina. He, Warren and Sanders are the only ones consistently polling above the 15% threshold. Buttigieg polls in his own tier, the others follow.

Endorsements are a sign of support from party officials. I use the 538 endorsement-tracker, but does not only look for point-values, but also the raw number of endorsements. I also included this time the number of unpledged delegates (= superdelegates) for the convention, which indicated their voting preference. According to the new rules the superdelegates only come into play if the first ballot has no majority, but still they exist and show a party preference. The data for this comes from Wikipedia. 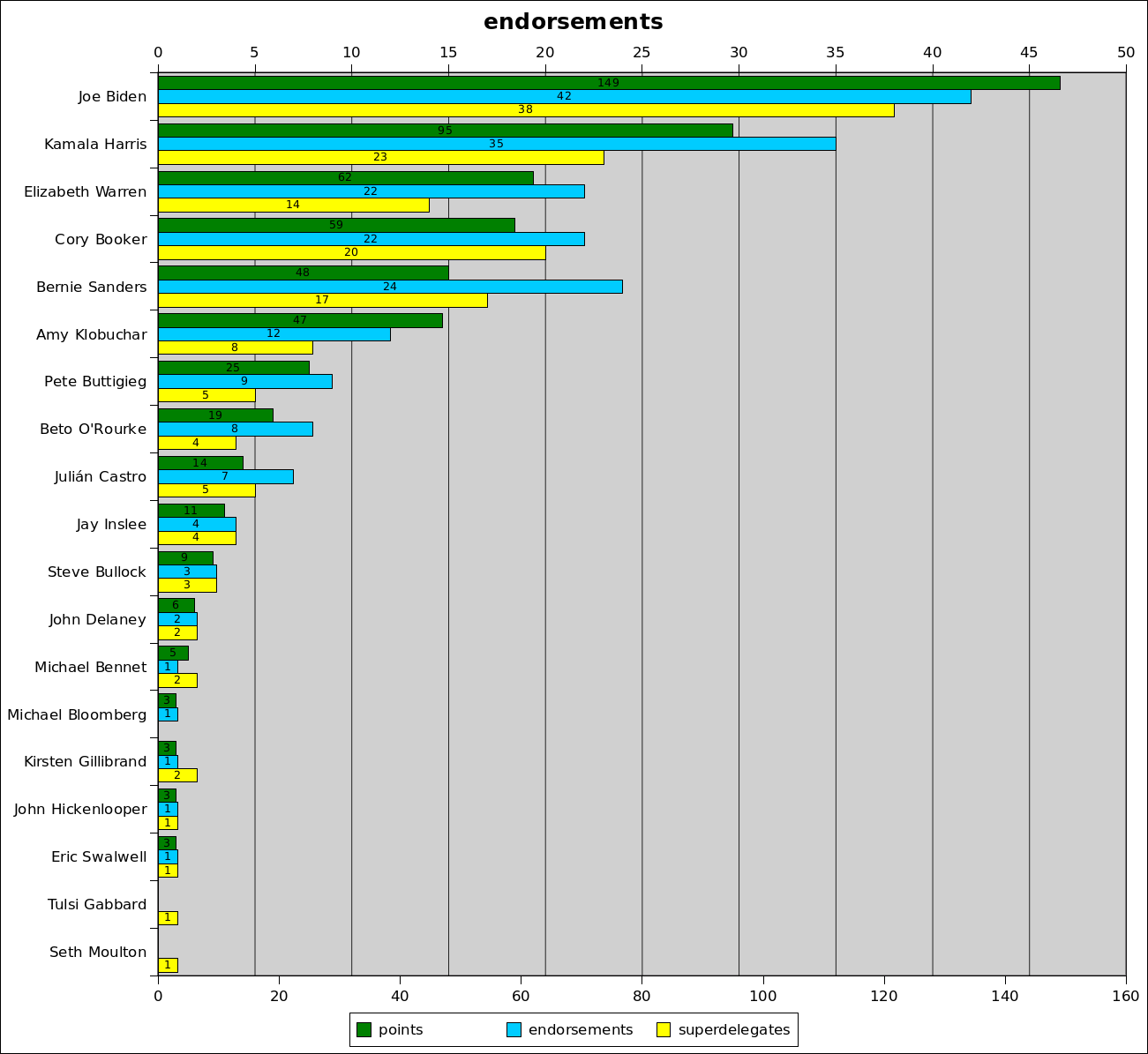 For the ranking I use the percentage of the total endorsement-pool. For instance there are 766 superdelegate votes. 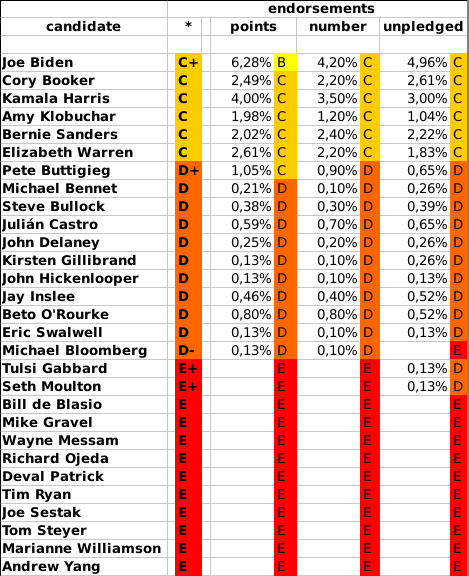 As you can see, nobody reached more than C-rank (I put B-rank at 5%). Overall only 20% of possible endorsements so far are set, and that includes the ones for candidates that already dropped out. So the majority of endorsees is still on the sidelines.

This category I updated with the data from the third quarter. 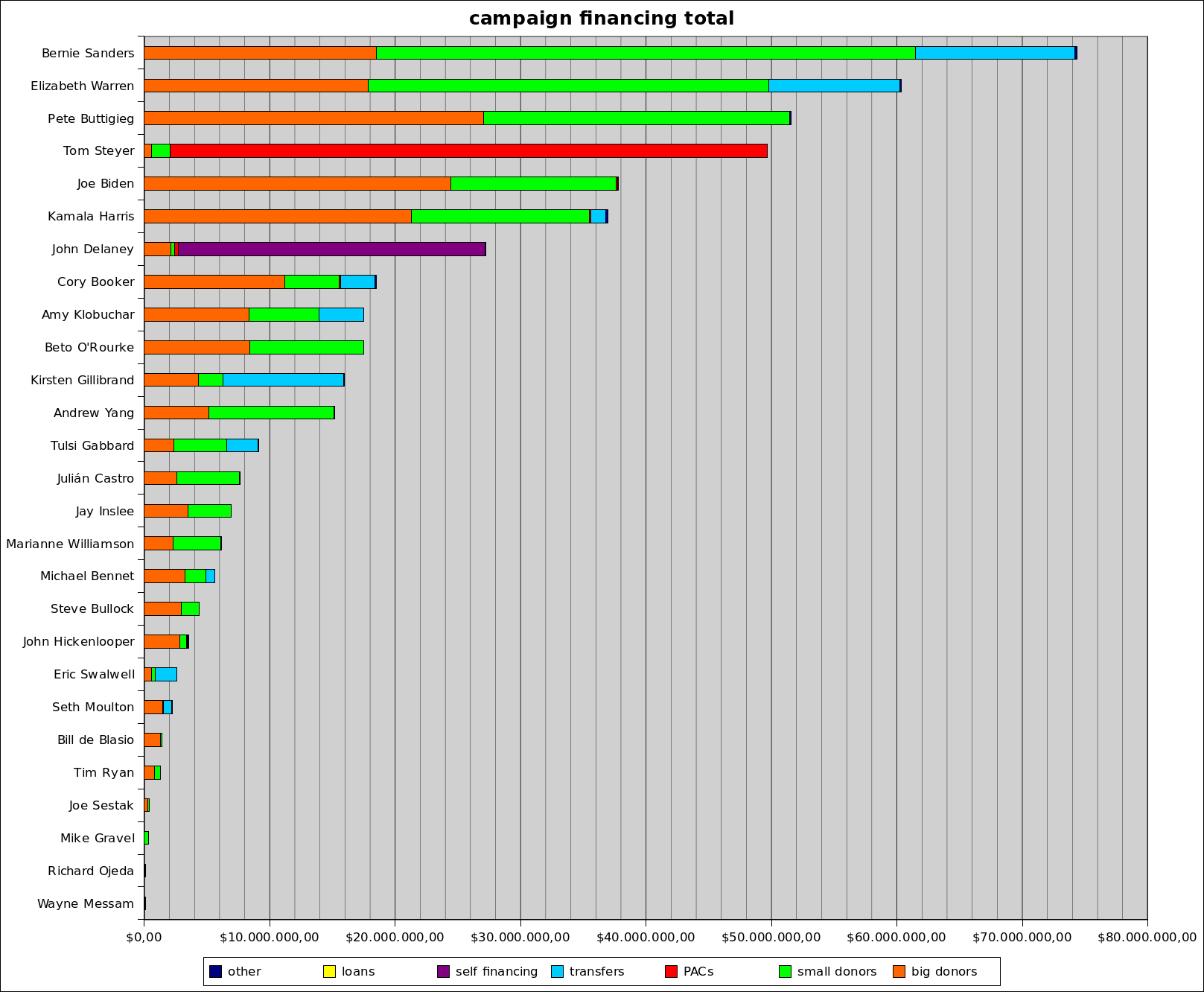 The above graph shows how each candidate gets his money. Delaney and Steyer both are self-financing, in Steyers case it only comes through a candidate committee, which is why it is in red. As you can see, Bernie Sanders is the king of small donations, while Buttigieg has overtaken Biden in bigger donations. Biden himself fell back, now nearly overtaken by Harris in total. 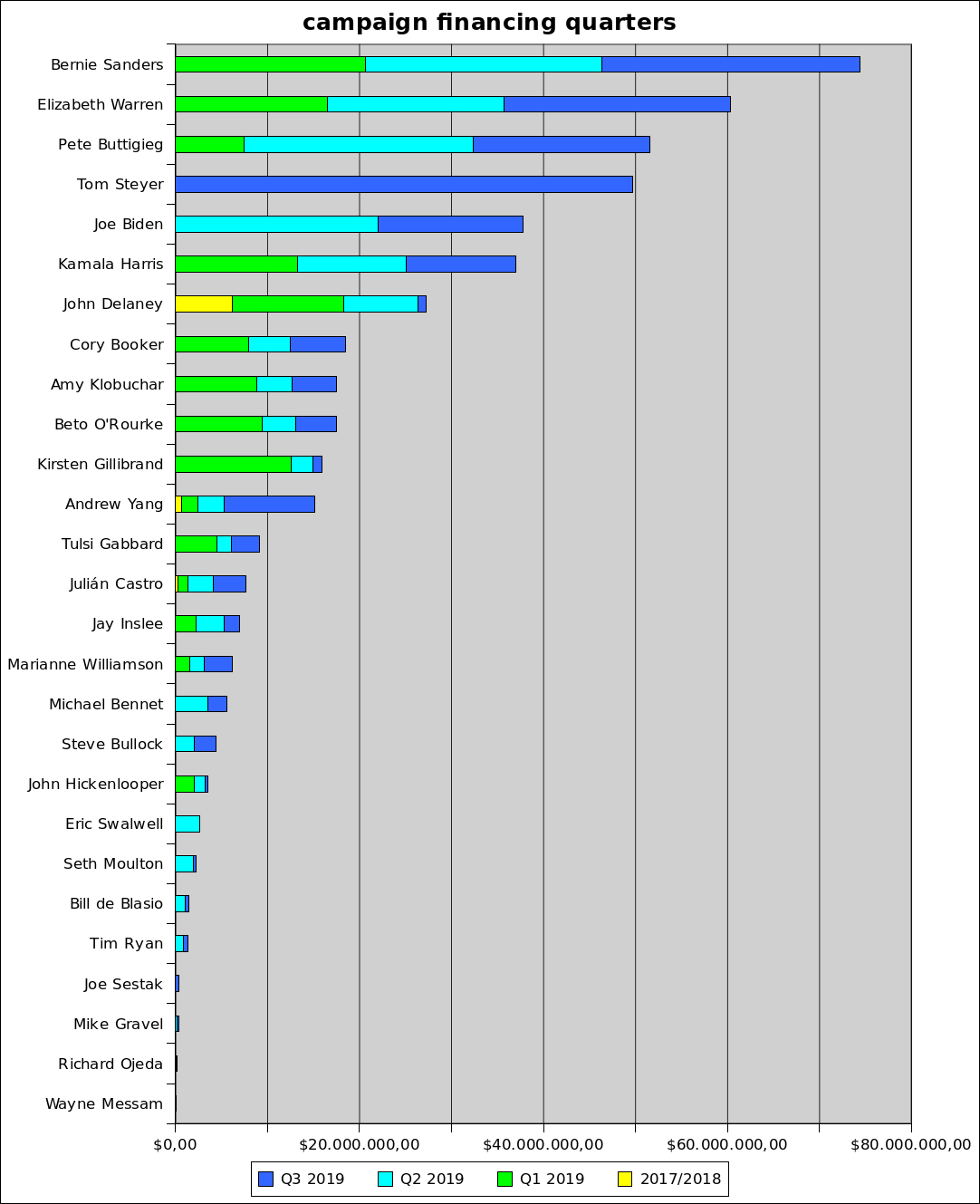 This graph shows how much each candidate raised in each quarter. You can see which campaign is slowing down or accelerating in fundraising this way. As you can see, both Sanders and Warren raised more in the third quarter, Kamala Harris stayed constant, while Bidens fundraising slowed. For the lower-tiered candidates it is notable how Andrew Yang could practically explode his fundraising.

For the ranking I used total money raised, money raised by donations (instead through transfers or self-financing), cash on hand and third quarter fundraising (as indicator for newer developments). 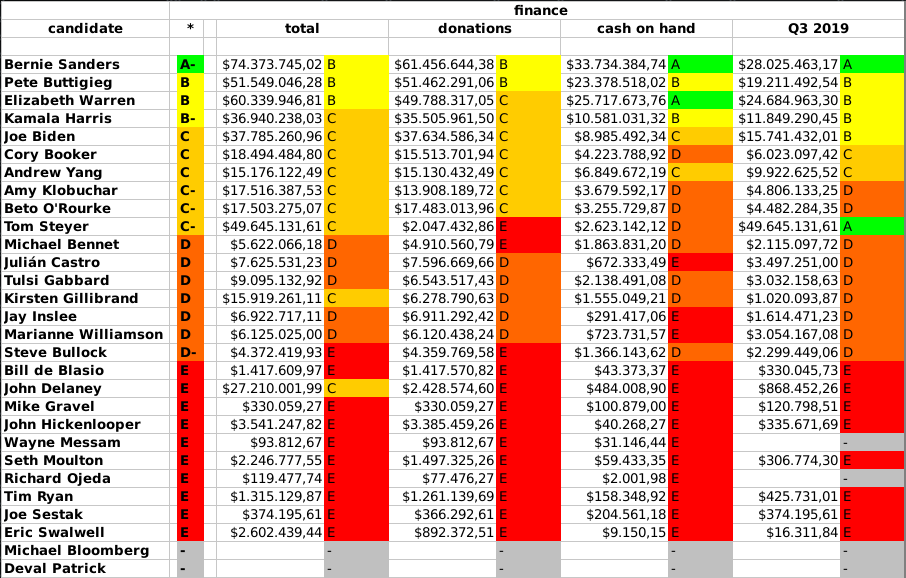 Bloomberg and Patrick haven't yet filed any report, as they entered so late. Clearly Sanders is leading in the money race, followed by Warren and Buttigieg. Biden is fallen behind in that regard.

This category contains the media attention the different candidates get. For that I looked how many big media had listed the candidate in their lists of major candidates, looked at cable new mentions for the year and the last three months. I also looked at social media, and there how many followers had the candidates on Twitter, Facebook and Instagram. 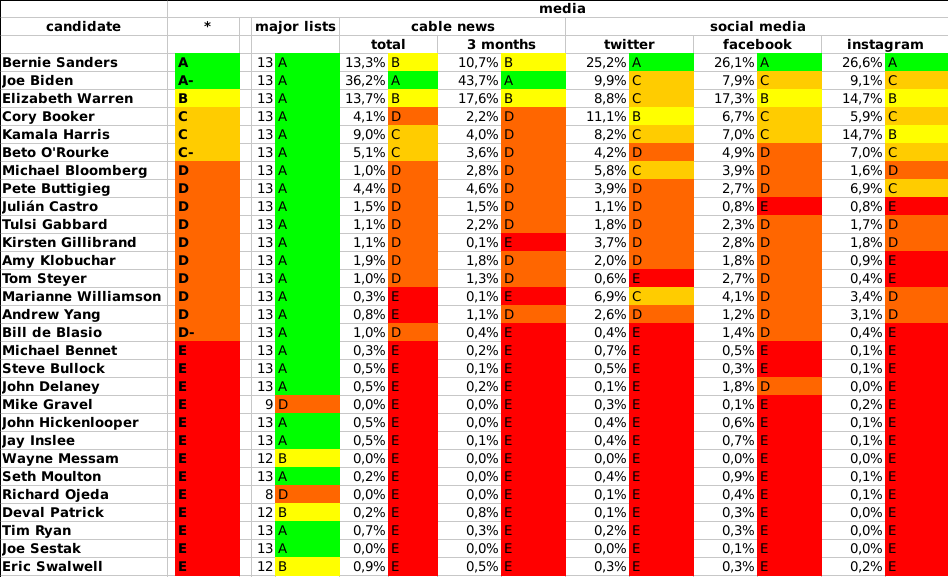 As you can see, it is a bit divided between cable news and social media. While Bernie Sanders is strong on social media, Joe Biden dominates the cable news mentions. Elizabeth Warren follows in both categories, everyone else falls behind.

The other-category is a wild mix of other stuff that I thought interesting. It contains a count of how many of the qualifying polls for each debate the candidates reached the threshold, net favorability and name recognition calculated from Morning Consult data, the betting odds of different betting sites gathered by Realclearpolitics and the unique donors each candidate had in june as compiled for the NYT donor map. 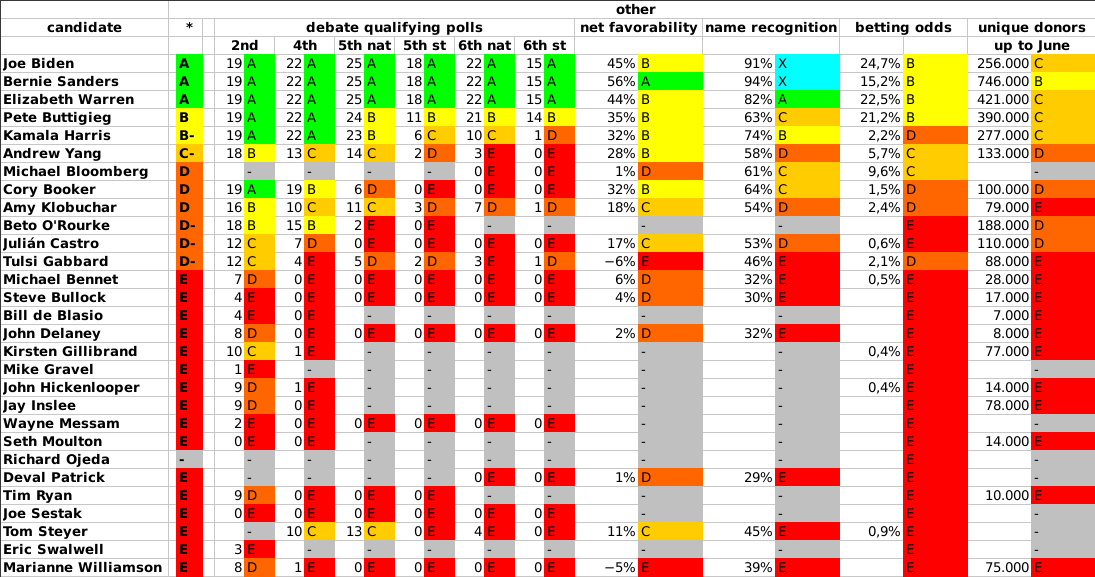 This category is lead by the three frontrunner, followed by Buttigieg and Harris. Yang is in a strange in-between place.

Well, taken together, we arrive at this: 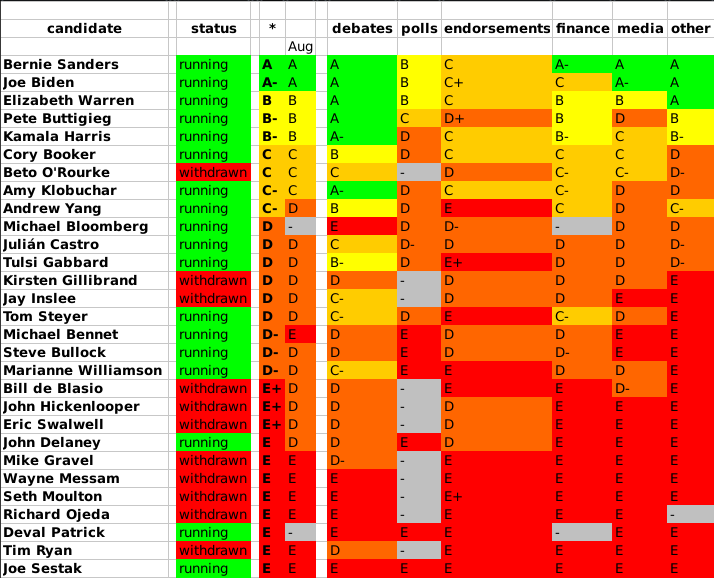 I included the ranking from August for comparison. As you can see, Sanders and Biden are leading, followed by Warren, Buttigieg and Harris.