As Liquid Laser guessed correctly, my game #48 is from the Zork-series. It is Return to Zork, a game that tried to revive the series after years of hiatus.

First I probably should tell something about the history of the series. In early days of computing, many of the computers had no graphical output, only text. But these already reached some people. And these people wanted to game too. Inspired from the first ever adventure game (one of the games named conveniently Adventure) three programmers started to work on their own adventure game in 1977. Zork became popular and was ported to many machines. That lead to the formation of the company Infocom that sold Zork and developed more text-adventures, including sequels to Zork. The Infocom adventures turned out very successful and basically textadventure was equalled with Infocom. Here is a look at the original Zork: 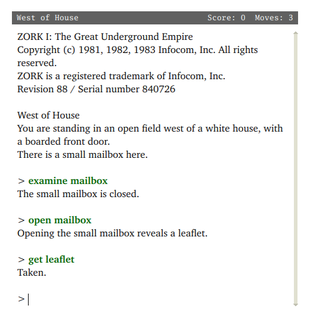 But the world changed. People bought more and more computers in only the IBM PC platform, so that Infocoms ability to port it to every platform under the sun became irrelevant. Computers started to have simple graphic cards and game makers utillized them. Infocom struggled in the environment. They even made advertisement, that the best gaming is text-based:

That all was for naught, the company was in problems and in the end Activision took them over. And in the Activision time this game came out. This was many years after the last Zork, so things had changed a lot. In the meantime computers had CD-drives that allowed for enormous (for that time) data to be saved. Some games tried somethign new, they mixed video-clips made with real actors with stuff layed over that to create a game. Activision was going the same route for Return to Zork.

So, if you look at this image, the guy is an actor, while the surroundings are graphic: While many of these games were pretty bad, because the parts didn't mesh very well, I personally think it worked good for this game. Seemingly Activision took their time to polish the game.

But the visual presentation is not the only thing that worked. The original Infocom-textadventures were popular, because the puzzles were creative and interesting and the challenge was great, as you could try anything you could come up with and typing it into the game. Return to Zork had no prompt to enter text, but the developers tried to catch some of the possibilities and offered a complex context-based popup-menu with options what you could do. And this could be a lot. Talking to other people was also interesting, as you could ask them for each item in your possession. As you could make photographs and ask about them, that included basically everything in the game.

For me this game worked so well. The adventure was thrilling, the puzzles, the interaction were challenging and interesting while not frustrating, the game oozed charme. If you want to try it today, gog offers the game. It also runs with ScummVm, so you could play it on different platforms.

This video shows the start of the game. The text with the white house and the mailbox is a reference to earlier Zork-titles.